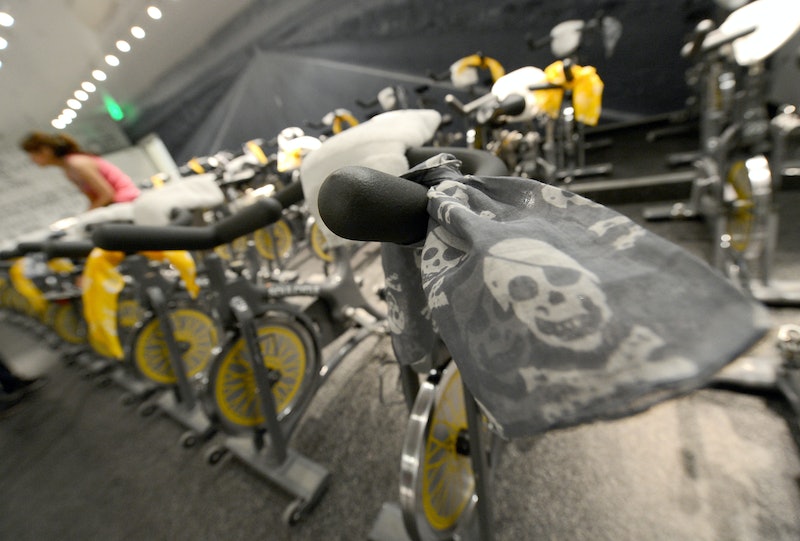 In only eight short years, the indoor cycling activity SoulCycle has exploded its dedicated cult following. Originally started in New York (where it seems a new studio pops up everyday), Soul Cycle has now opened on the West Coast, with more than 60 locations planned before 2015. And I'm obsessed.

People can't get enough of the fun (and loud) music; the sweat; the perfectly chiseled and peppy instructors; and — oh right —the fact that you burn quite a few calories during the class. Plus, how many workouts hold the promise of a celebrity sighting? Katie Holmes, Kelly Ripa, and Vanessa Hudgens are all fans, and Lady Gaga even took a few of the bikes on tour with her (I'd love to see her Soul outfit).

As with anything super popular that also has extremely smart branding, some have compared SoulCycle to a cult. Even uber-fan Lena Dunham told Vanity Fair, “I love the music, I love the sweat, I love the handsome gay teachers shrieking in your face — I’m super cult-y about it.” Anyone who is obsessed with SoulCycle knows why it's so easy to become cult-y about this workout. Here are a few things only people in the cult of Soul can truly understand.

You are terrified the first time you go

And you do almost die during that class

But once you've completed it, you suddenly feel like you could do anything!

Except sit down for a few days...

And then the first six times after that ... you still almost die during every class

But then, one day, you go and you don't feel like you're going to die!

And even though you're sore, you're hooked

...If Eliza Doolittle was sweating buckets. You have never sweat so much as you do in SoulCycle

When you find your perfect instructor it's like that scene in E.T.

You find yourself working SoulCycle into every conversation. Like conversations about Ukraine.

And your friends start to get concerned you're in a cult

Except with much better clothes

Seriously, you've spent hundreds of dollars on shirts with skulls on them

And now you kind of look like you are a backup dancer in Step-Up 2: The Streets

and you start to hear music when you're walking

Yes, you're such a diva that you just tapped it back for that guy behind you

When there's a celebrity in your class you feel like you could just walk up to them because you have seen them sweat...a lot

Still, you're always a little disappointed when you don't see Jake Gyllenhaal

you start to wonder how you ever exercised before without choreography. What were you, an animal?

So then you try to do choreography when you run ... and it looks ridiculous

Still, you feel kinda off when you haven't gone in a few days

Because you know no other workout will ever compare

I mean, really, how could it?