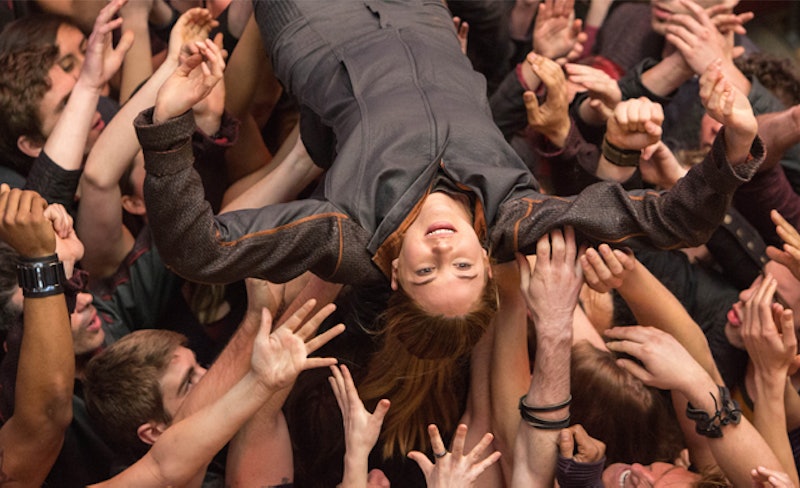 Now that you've been warned, it should come as no surprise that Divergent was popular enough to warrant not one, not two, but three sequels. In the spirit of franchises like Harry Potter,

Twilight, and The Hunger Games, Lionsgate/Summit have decided to split Allegiant, the final book in the Divergent series, into two movies. After they greenlit Insurgent, we all knew it was only a matter of time before Allegiant moved forward as well. The only question is why two movies?

Allegiant, like Breaking Dawn, was the most divisive book in the series. You can't please all of the fan base all of the time, but a lot of people were left feeling a bit cheated when Allegiant ended with the death of Tris. Yes, the first person narrator dies at the end of the franchise, leaving Four to take over as the narrator for the rest of the book. Of course, Veronica Roth took to her blog to explain to her furious readers why that ending had to happen and why it had to play out as it did, but no one was really satisfied by that. The debate is still raging on about whether or not Tris made a necessary sacrifice and it's sure to spark anew when we get closer to the release date of the movie.

The really frustrating thing is that more happens, at least visually speaking, in Insurgent than in Allegiant. While Divergent followed Tris from Abnegation to Dauntless, where she spends most of the movie, Insurgent will follow her to all of the other factions and back to Abnegation again as she deals with the grief of her parents' deaths and her guilt over killing one of her mind-controlled friends. With each faction representing a whole different society, wouldn't it be nice to have more than two hours to wander around in each of them?

In Allegiant, on the other hand, Tris and her friends make their way outside of the city, where they discover that their society was just one of many genetic experiments going on across what's left of the United States that is meant to produce more genetically pure — Divergent — people.

Shockingly, it takes Tris a while to figure out why people slinging around the phrase "genetically pure" might be the bad guys, but once she does she and Four team up to take them down. Either way, Allegiant was more about conversations and uncovering secrets than it was about action.

"The storytelling arc and world of the characters lend themselves perfect to two films, a storytelling strategy that has worked very well for us on the two Twilight Breaking Dawn films," said Lionsgate Motion Picture Group Co-Chairmen Rob Friedman and Patrick Wachsberger.

Considering they're talking about a book that had more or less the exact same page count as Insurgent, it's not really clear what they mean. Breaking Dawn was one of the largest books in the Twilight series, so it made sense to split the material. Allegiant does not have enough material to split, not unless they're going to take everything they end up cutting out of the first two movies and slapping it into the third and fourth. As much as I hate the ending of a franchise, Hollywood still hasn't sold me on the idea of books needing two movies to cover all of their material. Even the last two Harry Potter movies could basically be subtitled 'The Trio Goes Camping' and 'The One Where Things Actually Happen'.

Unless they do something new with Insurgent that will surprise even those who read the book, then they're going to stretch themselves pretty thin with filler scenes to make Allegiant a two movie deal.