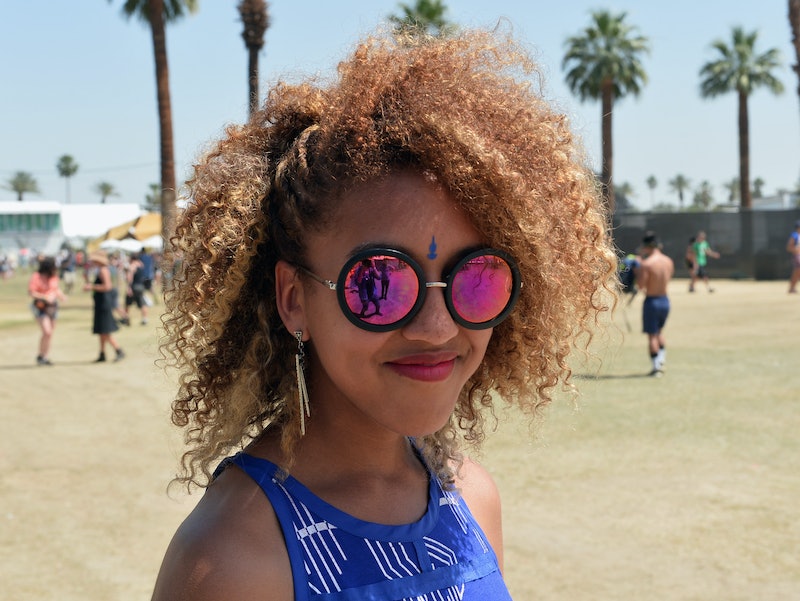 If you adore Ellie Goulding and Chromeo, have a love affair with bohemian headbands, and sport a collection of offbeat sunglasses, chances are you have been — or at least have dreams of going to — the Coachella Valley Music and Arts Festival. Hell, it's just 'Coachella,' and don't you know it.

The infamous bohemian music festival started in 1999, when Modest Mouse, Cibo Matto, and Beck drew in fans to the Indio Valley-based extravaganza. Though the lineup was praiseworthy, a heatwave prevented Coachella from gaining a cultural foothold — or a profit. After a one-year hiatus to regroup, Coachella was back with more big-name performers than ever, and slowly built up its reputation as a free-spirited, hipster nirvana. Fast forward 14 years, and Coachella is a nationally recognized cultural institution for music aficionados —and, of course, for fashion.

Over the years, Coachella has gained a slew of celebrity devotees, including but not limited to rockers and their paramours, 20-something starlets, Victoria's Secret Angels, and female vocalists looking to promote their works. And so Coachella became the place to display off-duty styles and a killer pair of nude booties. Coachella's fashion reputation was built on a foundation of social networking, from famous fashion bloggers to social media style stars and the resulting influx of images. Instagram's sudden popularity created yet another immediate way to document Coachella's fashion exploits — #coachella takes over the platform during the festival each year. You just can't avoid it, even if you're not in the middle of the desert.

Due to the heat and general tropical conditions in Indio, the traditional rules of fashion are fluid, often resulting in ensembles that look more appropriate for a beach than a fashionable shindig. And the free-wheeling vibe of the weekend inspires attendees to take the opportunity to get a little idiosyncratic with their outfits. While the festival's website states that Coachella bans chain wallets and stuffed animals, dancing shoes, fanny packs, and hats are encouraged.

Such is the style of dress at Coachella: the quirkier and more bohemian, the better. While Coachella fashion does provide a plethora of visual delights, there are some particularly wacky or heedless ensembles we wish we could un-see. Vanessa Hudgens became a target of condemnation on Sunday for wearing a bindi to Coachella as a fashion statement. And somehow, feathers arranged like a Native American headdress are acceptable within the confines of Coachella, but not one step outside the concert grounds.

Thus we are presented with the dichotomy of Coachella's fashion scene. The weekend exists in a cultural bubble where creativity to the point of being outré is encouraged, but styles that are too eccentric immediately incite negative attention. It's a fine line many attendees play hopscotch with, to incredibly amusing affect.

Coachella has forged a uniquely liberated style of dress, taking inspiration from established decades-old institutions like Glastonbury, and one-time landmarks like Woodstock. Whereas Glastonbury is characterized by edgy combinations of Hunter wellies and jorts, and Woodstock saw every trend from fringe to clothing-optional, Coachella tends towards booties, free-flowing dresses, and...well, the least clothing possible. Celebrities and concert-goers have attributed a very specific aesthetic to Coachella, defined by keywords like "bohemian," "avant-garde," "artistic," and, above all, "hipster." The Coachella style is an amalgamation of deliberate attention to detail and relaxed hippie-couture, exemplified by brands like Isabel Marant and Free People. Cult brands like American Apparel have their own loyal Coachella following; for this year's festival, the company promised a $150 store gift certificate to one lucky American Apparel-wearing Instagram user who tagged their Coachella photos with #aacoachella and @americanapparelusa.

The more chill, Venice Beach boardwalk-inspired look pairs micro-cutoffs with a slouchy tee and booties, often accessorized with a floaty scarf, crossbody bag, and piles of mismatched bracelets. Maxi dresses are another staple of the Coachella attendee, best when paired with a roughed-up leather belt and lighter-than-air necklaces.

Coachella fashion is — and will remain — anomalous. A leather skater skirt paired with a teeny bikini top and spiked necklace doesn't fly on the streets of New York, nor does a pair of furry rainbow moon boots in San Francisco. Coachella's insane genius lies in the fact that its endearing looniness is limited to two weekends a year. And if we're perfectly honest, that's all it takes for us to get our fill of such outlandish fashion. While unconventional style may not be an enforced dress code for Coachella, it'd be odd to be the one person wearing a prim Lilly Pulitzer dress in a sea of neon crop tops, bohemian crocheted knits, and floral halos.

Though the festival originated as a casual, counterculture spectacle, its now-storied style has encouraged celebrities to parade designer wares in a low-key fashion. This year, expect to see stars like Harley Viera-Newton in designer gingham and straw, and Hannah Bronfman in Carven skirts and Superga sneakers. As for Coachella veterans, we fully anticipate Kate Bosworth and Michael Polish in all of their Dicker bootie and J Brand skinny-jeaned newlywed glory.

Though they may look haphazard, Coachella fashions are the most calculated — all the better to look just a little rebellious in case of wayward paparazzi snaps.