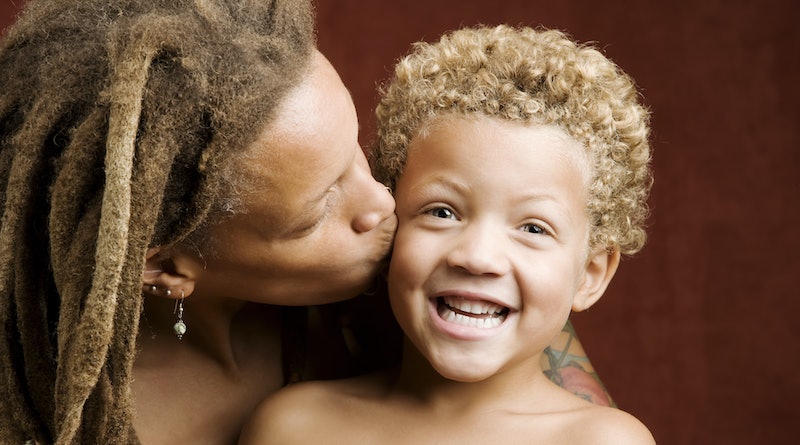 What will America look like in 30 or 40 years? National Geographic has a few ideas, basically positing that, with interracial marriage on the rise, our country has a decidedly multiracial future. And their photos of what the average American will look like are certainly not what we've come to expect.

Mixed race people have been part of the United States since before it even was the United States. The first person of Afro-European descent to live in what were then the British colonies was born in Virginia in 1620, only one year after the first African slaves arrived in the territory. But until recently, the reality of people with a diverse heritage has been largely ignored. The year 2000 was the first year that the U.S. census allow respondents to check multiple boxes when asked about their race. For the 6.8 million people who did that (about 2.4 percent of the population), it was long overdue.

So will the average American of 2050 be multiracial? There's obviously no way to know for sure, but these National Geographic pictures give us an idea what that might look like.

America has a long history of having a very rigid racial coding system, one which tends to view race as an absolute category. Which is rather ridiculous given that race as a category has no biological basis. Yet in this country, something that is essentially a social construct has been treated as an immovable fact, one with very rigid boundaries and definitions. People of mixed race tend to challenge these sorts of rigid assumptions simply by existing, and so the rise of multiracial people in our society may indeed go a long way towards breaking down our operating assumptions about race.

However, it's also worth noting that this deconstruction isn't necessarily a given. America's rigid racial mindset often means that mixed race people are relegated to one category or the other – and if they happen to be part white, they are often excluded from that category as a matter of course. In other words, multiracial people's identities are often expected to adapt to our society's rigid understanding of race, rather than the other way around.

As an obvious example, Barack Obama is hailed as our nation's first black president, though he is actually biracial and was raised primarily by a white mother. He has just as much, if not more, reason to identify as white as he does black, but he is rarely referred to as biracial, and almost always referred to as black. Despite the fact that his heritage is well known, he is still only allowed one racial category. And he is not alone in that.

It may be that the face of 2050 will be multiracial, and that our country's understanding of race will have matured and grown more nuanced accordingly — or it may be that assimilation and conformity to current racial standards will continue to be the norm. Personally, I'm hoping for option one, though.