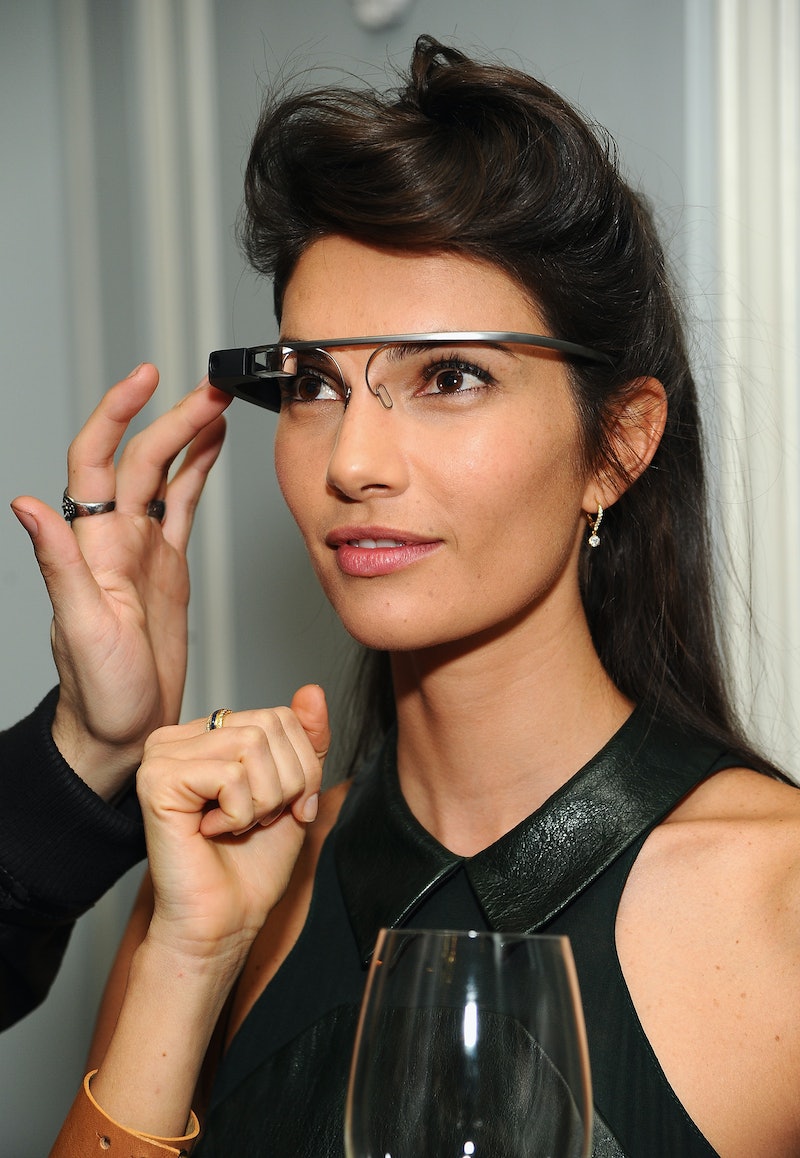 As of next Tuesday, any adult American can purchase a Google Glass — for one day only — for $1,500. But why would you? When Google Glass was first released in February of 2013, my boyfriend, the techy, was thrilled. I, on the other hand, was confused.

The first product of its kind, Google Glass, an "augmented reality head-mounted display," seems to have the primary purpose of allowing busy millennials to record every moment of their lives, without the hassle of having to pull your phone out of your pocket. Basically, for those of us who are just so busy that even this small task becomes a chore, Google Glass has come to the rescue.

Today I tried on a Google Glass, and I was still confused. I was also pretty disenchanted. Here's why.

It doesn't fold, you can only see out of one eye, and it doesn't improve your vision in any way. In fact, I think that it may be quite dangerous: In my attempts to constantly keep the screen visible, I did some pretty strange eye maneuvers that quickly became strange walking maneuvers.

Because the screen is centered over your right eye, you are perpetually cross-eyed when trying to tell Google Glass to do something.

Google Glass commercials that feature trapeze-swinging or jogging or whatever other physical activity that will require some level of bouncing are misleading. Not only does it strain your eyes, but it also doesn't stay on your face very well.

3. It Has Limited Functionality

The most popular options are to take a photo or video, but otherwise, there is little else available. There are a total of nine options on the "OK Glass" home page. You can ask for directions, you can write a note, you can make a call (if you have Bluetooth set up), but you can't do anything revolutionary. Nor does it really make anything that much easier.

Nothing about the interface makes sense. Turning Google Glass on was a challenge in and of itself, and one that I absolutely could not do on my own without having its owner (who had to learn at the Google store) show me.

I'm not a tech wizard, but I'm also able to work an iPhone without reading a manual. Once Google Glass is on, the real challenge begins. In order to make Google Glass do anything, you must precede your command with "OK, Glass." But sometimes, Glass doesn't want to do anything, and turns off. In that case, you must figure out how to turn it back on, which sometimes means tapping it with one finger, and other times means taking off Glass and pressing a button.

In short, working Google Glass is very difficult, and I imagine it would be even more difficult if I was on the move.

Regardless of my issues with Google Glass, it may have serious implications in certain fields. For example, experts at Newcastle University are currently investigating Google Glass' benefits for individuals with Parkinson's. Because Google Glass can be connected to smartphones and to the internet, it allows for a sort of continuity that is crucial for Parkinson's sufferers.

Google Glass may also save lives in the operating room. As The Boston Globe reported, Dr. Steven Horng had a patient with a brain bleed, who wasn't sure of which blood pressure drugs he was allergic to. Dr. Horng, desperately needing to stop the bleeding, had no time to go through the patient's chart. Instead, he simply pulled up the patient's information on Google Glass, and proceeded with the correct medication.

Moreover, firefighters and the police are considering using Google Glass to map out dangerous situations before risking the lives of their brave men and women. In North Carolina, firefighter Patrick Jackson is building an app that seeks to provide firefighters with critical information, like building floorplans and safety instructions.

The NYPD is also experimenting with Google Glass, since they could save officers from having to search for a radio, smartphone, tablet or computer, thereby allowing them to save precious time in dangerous situations.

While Google Glass may be great in saving lives and in these specific, niche industries, I don't think it's ready for widespread consumption. So on April 15, when Google Glass is available for one day for $1,500... spend your money elsewhere.