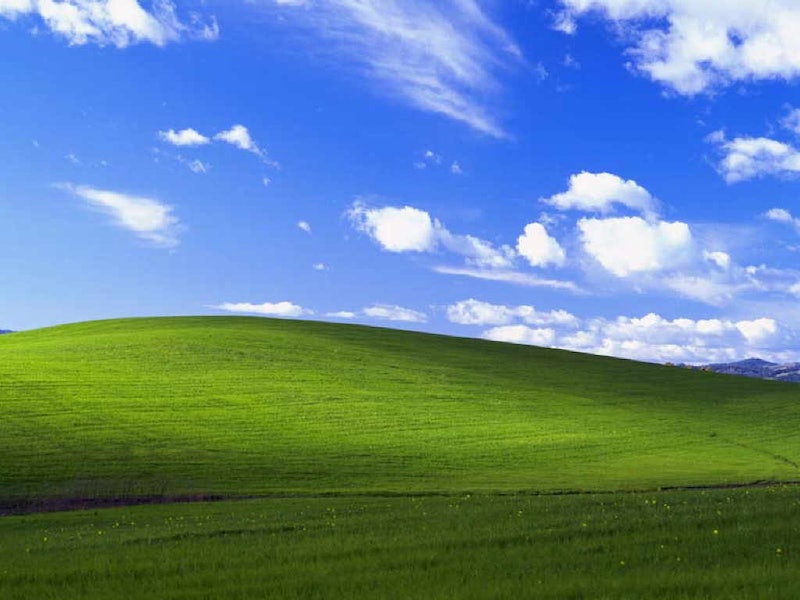 Tuesday saw an end of an era when Microsoft ended support for its Windows XP operating system. Still, no-one will miss it too much — except, maybe, photographer Charles O'Rear. He actually took the photo that became Microsoft XP's default background picture, "Bliss," which was seen by more than one billion people since its introduction and might be the most-viewed image in the world. Yep, the photo is a picture of a real place, not just a Photoshopped creation that Microsoft's developers slapped together. Who knew?

O'Rear recounted the story behind the "Bliss" photograph in an interview with Microsoft: He was driving on a winding road in 1998 near his home in Sonoma County, Calif., to his girlfriend's house when he pulled over to snap the scene. It only took four frames, and he didn't use digital equipment. The way O'Rear describes it sounds like a quick yet peaceful moment, not unlike the serenity that the photo exudes.

Microsoft apparently noticed the image through Corbis, O'Rear's agent, and they flew him out to the computer company's headquarters to hand the photo over to them personally (because O'Rear was having trouble sending it through the mail, due to the value Microsoft attached to it). Advertising Week notes that the current maximum value for FedEx photo packages is $1,000. Microsoft paid a hefty sum — one of the largest amounts ever paid for a single photograph — but O'Rear can't disclose the amount.

He never expected it to show up on millions of desktops around the world. "I had no idea where it was gonna go," O'Rear says.

The image has now become ubiquitous with Microsoft, and O'Rear has seen his photo on screens everywhere from the White House to the Kremlin. He thinks that everyone age 15 and older will remember "Bliss" for their whole lives.

"XP's gonna go away. The photograph will not be seen as much as much as I've seen it in the last 12 or 13 years. Do I lose sleep over that? Nooo. I think it's had a wonderful ride. I'm just pleased to see it out there, thrilled to know that people have pleasure from looking at that, from looking at a photograph that I've made."

He did say, jokingly, that he was waiting for a call from Microsoft about a desktop photo for Windows 8.

O'Rear was also a photographer with National Geographic for 25 years. His website features a variation of the now-famous Microsoft rolling hills.