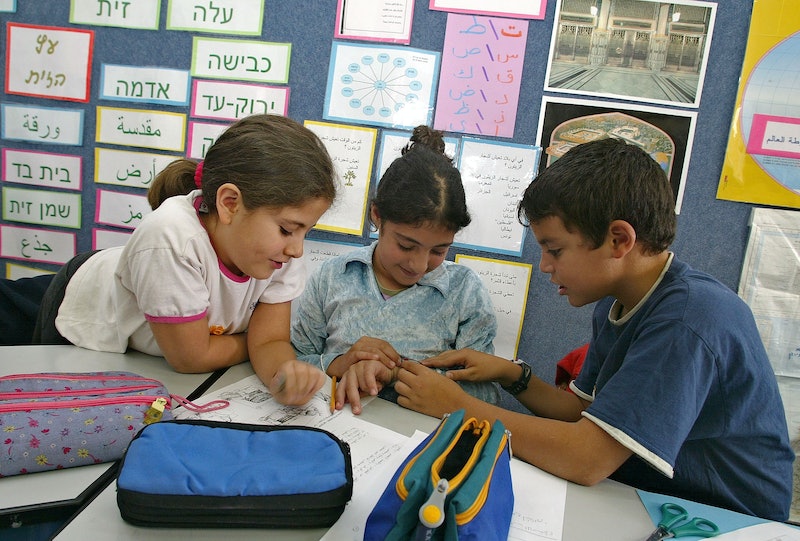 Whether you only attended a Jewish day school for a couple of years as a kid, or are a Jewish school lifer (like a "preschool through your PhD in Modern Jewish Literature at Brandeis, with perhaps a gap year in Israel in between" lifer), you've definitely struggled against — and hopefully eventually succeeded in getting a handle on — certain elements of the very unique Jewish school experience. Like strictly kosher lunches, weekend Shabbatons, school musicals with all the songs translated into Hebrew, and potentially difficult (and totally nonnegotiable) dress codes that followed you through your school years. These rules and lessons impacted you so deeply that whether you graduated last week or a decade ago, the real world —where you can eat anything and do whatever you want with your weekends — remains a kind of amazing novelty.

Of course, the post-Jewish school life lacks some of Jewish school's charms, too — real life isn't postponed for 30 minutes for Rosh Chodesh any more, alas. But there are definitely some experiences (and Hebrew words) that will stick with you for the rest of your life. And yes, my Bachelors Degree in Modern Jewish studies was very useful in writing this. So no matter how many years you are a removed from those compulsory Hebrew classes, these are 21 things anyone who went to Jewish school will understand.

1. You Still Expect To Have Every Jewish Holiday Off

School was always closed for Rosh Hashanah, Yom Kippur, Sukkot, Simchat Torah, Purim, Passover, Shavout, and many, many more Jewish holidays, so it's tough to adjust to working through some of them (oh, who are we kidding — you've told your boss you still observe all of these holidays).

2. Your Facebook Feed Is Always Full Of Recipes For The Next Jewish Holiday

I'm so guilty of posting these. But who can resist Passover Pinterest?

3. You're Used To Packing A Dairy Lunch

Thanks to your years of eating in a kosher cafeteria, you've forgotten that you can actually pack meat for lunch, or — gasp! — meat and cheese, if you dare.

4. You Still Complain About The Number Of Hebrew Classes You've Taken In Your Lifetime

But at least you still remember the seven binyanim, right?

6. Most Of Your Friends Are Jewish

But really, it's not your fault! You also went to Jewish camp! You never even had a chance!

8. Your Non-Jewish Friends Call You "Rabbi" Or "Super Jew"

Ugh, stop. But yes, I can tell you if that's kosher or not.

The sheer amount of bar and bat mitzvahs you hit per weekend back then dwarfs the total amount of bars you've ever been to in your entire twenties.

Life was rough between David 1 and David 3, but you still kind of want to get back together with David 2.

You'd kill on a really specifically-themed episode of Jeopardy!

12. Martin Buber, Abraham Joshua Heschel, And Shalom Aleichem Are All Familiar Names To You

You can also identify a portrait of Solomon Schechter from 10 paces away.

13. When You Go Out On Friday Nights, You Refer To It As "Shabbat Dinner"

I had three shots of Fireball and half a pizza for Shabbat last week.

14. The First Thing You Notice About A Door Is Whether It Has A Mezzuzah

There are so many naked doors in the real world!

15. You're Embarrassingly Ignorant Of Christian Traditions

What is an Easter?

16. Half Of Your Former Classmates Are Engaged...

So now half of your Facebook feed is in Hebrew, or about Israeli politics.

And you still use it daily.

And you think 5776 is really gonna be your year.

21. You Probably Work At A Jewish Company

You Jewish studies major, you.