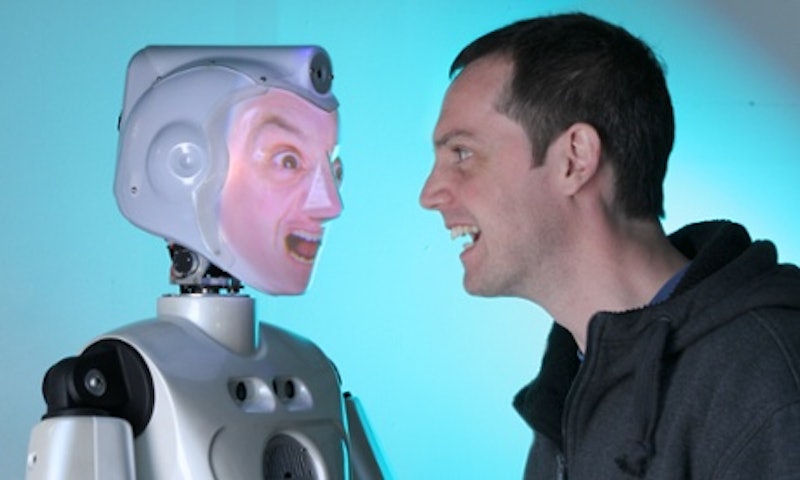 Forget FaceTime — the Socibot is going to completely change the way you talk to your friends. A "social robot" invented by a Cornish company called Engineered Arts, this device reportedly knows how to mimic your caller's facial expressions and emotions and is able to display them on its plastic surface, bringing a personal element to videoconferencing.

“It's like having a real presence in the room. You simply upload a static photo of the face you want it to mimic and our software does the rest, animating the features down to subtle mouth twitches and eyes that follow you around the room. Even when they're not speaking, it really feels like there's someone there, keeping an eye on you.”

Woah, things just got real. Carey acknowledged that the face of the disembodied person staring out from the frame might not be what you'd expect for your everyday phone call, but the company "thinks it could transform the way we interact over long distances by simulating the subtleties of human expression, recreating the things that are lost on a flat screen." Ahh, yes. More confusion by deciphering facial expressions is exactly what we need.

The robot is purposely designed to be "gender and ethnically neutral." Carey said the translucent mask is projected on from within, so the chosen face is "3D-mapped on to its surface and speech perfectly synchs, while the head turns and tilts as it talks."

I still can't tell if this is genius or just plain creepy. But for the price of £14,500, I think I will definitely pass.