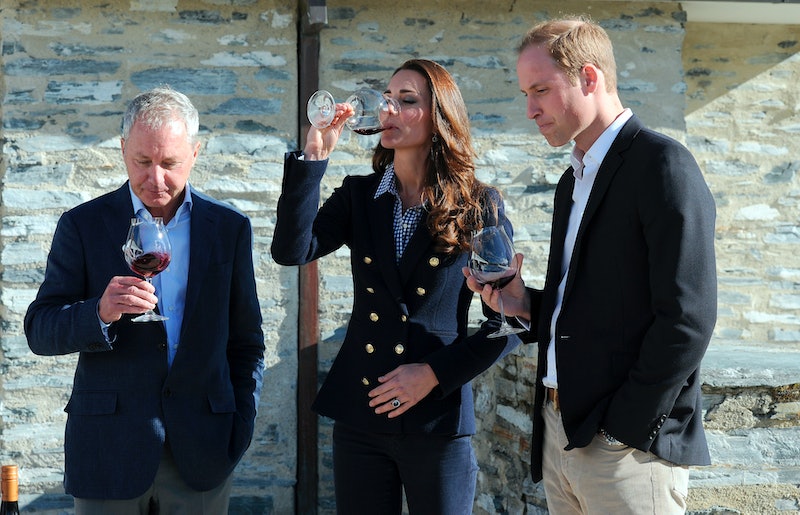 Despite Prince William's pregnancy jokes, Kate Middleton confirmed she is not pregnant. Well, not verbally, but she did give us a pretty good guess. The vehicle? A glass of wine. Her visit to the Amisfield vineyard served the multiple purposes of showing off her effortless style, advertising the winery on the international market, and letting the world know that there are no buns in the royal oven. To further drive the point home, she and William engaged in high-speed white-water rafting. Huzzah for post-pregnancy activities!

I'd like to stop and consider the kind of life I'd be living if every glass of wine was a symbolic act. This is a fate common to many major celebrities, and there is, perhaps, no better commentary on this "fishbowl" effect than 1998's The Truman Show. Just as Jim Carrey as Truman lived in a world with countless recording devices, today's celebrities disguise themselves before leaving their houses for food, drink, or hot yoga. Everyone with an iPhone is a potential paparazzo, which makes even walking their dogs together an act of public performance. Imagine, then, the intense focus that the Royal Family, who have their own header on Entertainment Online, must live with every day. While movie stars have their own films and shows to promote, the members of the Royal Family provide entertainment through their daily lives. Here, then, is what Prince George can expect as a celebrity from birth in the age of the internet. Thank you, Jim Carrey, for your contributions.

Baby photos of Prince George, have been selling like hotcakes. Now that gifs are a thing, we can expect clips of his birthday cake consumption, first football goal, and shopping trips with mom to go viral. Even though he was born before the internet got big, Prince Harry still has plenty of material from school and sporting events online. For Prince George, expect even more exposure through social media.

Once again, Prince Harry backs this up with his own experiences. From poorly-planned Halloween costumes to games of strip-poker in Vegas, the media will be all over Prince George's self-expression and choice of activities. Especially if they take a turn for the delinquent.

Kate Middleton, of course, has been making waves with her fashion choices since day one. Just as The Truman Show made use of any opportunity to sell a new product, so, too, can the Royal Family. Odds are that Middleton has a contract with Alexander McQueen, while Rogaine has been pursuing her husband for quite some time. Prince George could very well be the next Gerber baby.

While it may not take Prince George thirty years to realize that he is a public figure, it will be interesting to watch him grow into his role. Will he make faces like Harry, or will he accept his place with a sense of sober responsibility? With this self-awareness, however, comes a departure from The Truman Show. While Truman is ultimately able to fight through his manufactured fears and find his way to freedom, George will have no exit from this life. Until interplanetary travel becomes widespread, he will be trapped in the same world as his fans until his last breaths. And, on that happy note, we hope that Kate Middleton continues to enjoy the perks of not being pregnant.