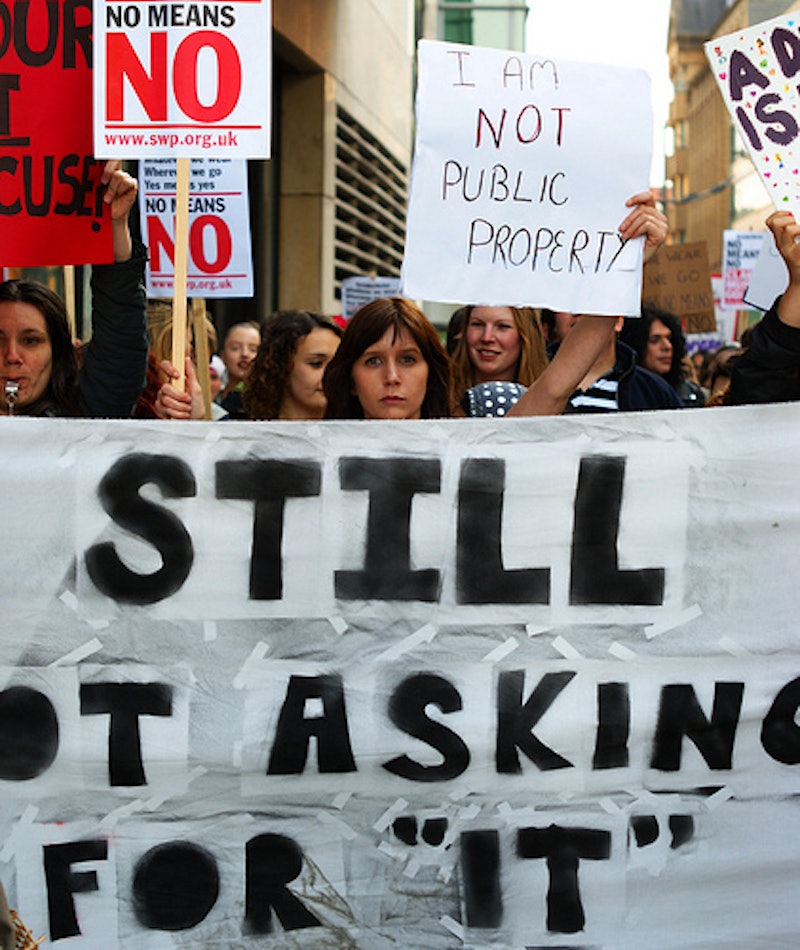 Hollaback! (an organization devoted to eradicating street harassment) has released a survey that shows that 97 percent of respondents in Ottawa, Ont. have experienced street harassment in the last year. Only 10 percent of them have reported it. Neither of those statistics are surprising or shocking to me, but maybe that's an indication of just how far we have to go in terms of changing attitudes about street harassment.

Hollaback reports that 44 percent of respondents to the survey reported being harassed on public transportation. 38 percent of respondents said that street harassment made them fearful to go out alone and 32% would routinely change their route or final destination. Julie Lalonde, the director of Hollaback! Ottawa, said:

“The results are in line what we already know about sexual violence: It’s ubiquitous and yet, we rarely talk about it. It’s difficult to talk about with our friends, let alone reporting it to the police."

I've never once reported an incident of street harassment and I've been harassed hundreds of times in my life. Honestly, it's never even occurred to me to report street harassment, unless it was someone flashing or inappropriately touching me (both of which happened when I was younger, and which I didn't report. If either happened to me today, I think I probably would report it, but I'm still unlikely to report catcalls or other forms of street harassment). I feel like most women and LGBT individuals just accept street harassment as one of the bullshit things about being a woman. Frustrating, yes. Demeaning, yes. Insulting, yes. But not something that seems like a crime you can call the police about, because it's so widespread, so common, and so widely accepted by both men and women.

But that's the attitude and the mindset that Hollaback is trying to change. The organization has chapters around the world that are doing the hard work of trying to dispel the notion that women's bodies, in public, are public property. Through activism and the creation of public conversations about street harassment, Hollaback hopes to encourage more people to actually take action against catcalls, flashing, groping, sexual comments, and other forms of street harassment.

Personally, I never know what to do when I experience street harassment. Do I ignore it? Do I respond, letting the perpetrator know it's not ok to speak to me or gesture to me like that? Do I call another person's attention to it? Most of the time, I just give the person a dirty look, although inwardly I'm dying to say something. I don't ever actually say anything because I'm scared, because I have no idea what might happen if I respond to this person in a confrontational or negative way. Will they become aggressive? Will they continue the harassment?

One thing I can do, though, is share my story (or stories) with my local Hollaback, as well as the people in my social circle, and encourage other women and LGBT people to talk about street harassment, too. This isn't a problem that's going away anytime soon, but if enough of us band together to speak up, maybe street harassment won't always feel like a problem we're powerless to change.

More like this
How To Fight For Reproductive Rights, Based On How Much Time You Have
By Courtney Young
Sandra Bullock, Girlboss Extraordinaire
By Matt Harkins & Viviana Olen
The Case For A Hard Launch Summer
By Morgan Sullivan
Yomi Adegoke On The Offline Diaries & The Power Of Representation
By Jessica Morgan
Get Even More From Bustle — Sign Up For The Newsletter