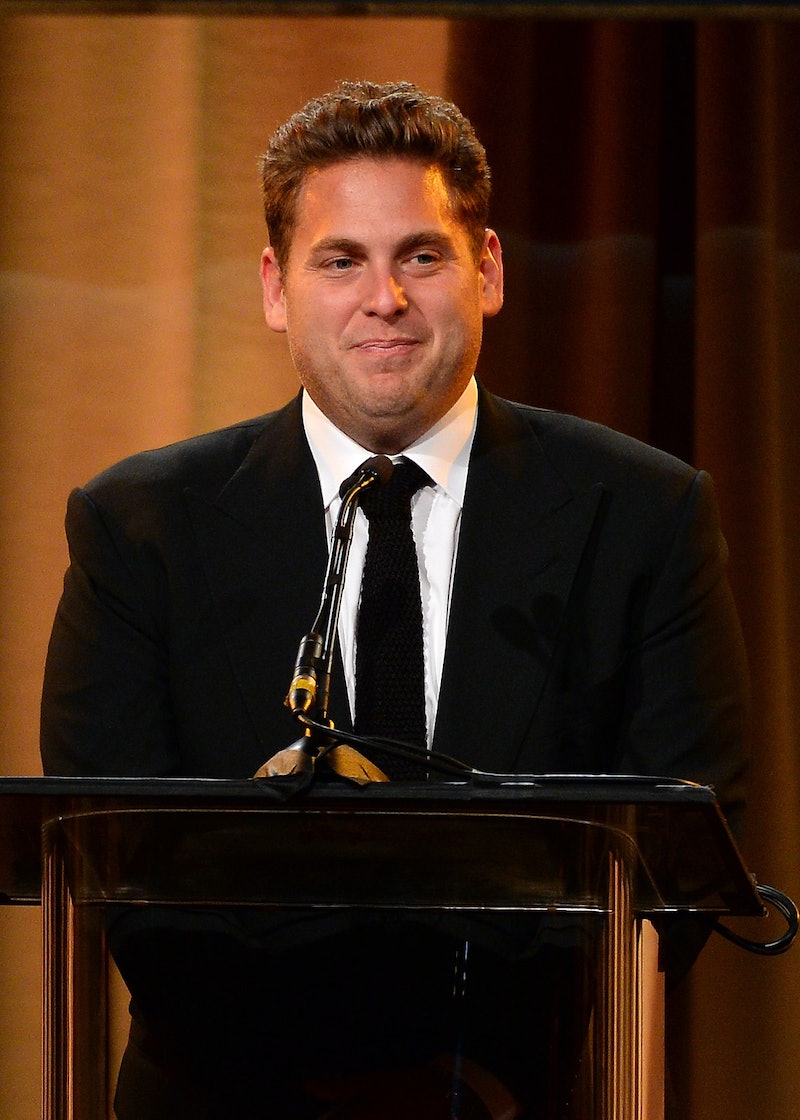 For someone who enjoys throwing around his A-list affiliations as much as he enjoys throwing around the word "Oscar-nominated," Jonah Hill certainly doesn't seem to enjoy being alongside his famous pals. Ahead of the June 12 release of the comedy This Is the End, Rolling Stone reporter Erik Hedegaard spoke to the cast for the magazine's special weed issue, and Hill was quite a bit more, well, blunt than his beloved cohorts.

And by blunt, I mean completely insufferable. At least, that's how Hedegaard portrayed it, thanks to some pretty damning quotes from the (ugh) Oscar-nominated actor. Admittedly, it's easy to feel bad for someone clearly harboring some insecurities and inflated sense of fame, but, then again, I never really liked him in Superbad. Below, see the eight most insufferable quotes from Hill from his Rolling Stone interview, which began with Hedegaard jokingly calling him "Seth."

The reporter would have started with a simple "Hi," but knew better after Don Lemon made the mistake.

We ask if he does pushups and stuff like that or what? He stiffens and says, "My workout routine is of little relevance."

Said the man who made sure to talk to press at length about his weight loss.

"I don't even smoke weed," he says, in such a pre-emptive, aggressive way that we figure he has heard about our little e-joint, so we decide to keep it hidden.

"I'm not answering that dumb question! I'm not that kind of person! Being in a funny movie doesn't make me have to answer dumb questions. It has nothing to do with who I am."

Said Hill after Hedegaard asked about his farts. Let us note now that fellow Oscar nominee James Franco admits to farting on planes. And that Oscar winner and Hollywood royalty George Clooney told Rolling Stone in 2011 that he bonds with his A-list friends over flatulence. "Saying the word 'fart' makes me laugh," he told the publication. "I have iFart on my phone."

"I've done one of the biggest challenges you can do in Hollywood, which is transition from being a comedic actor to being a serious actor, and I'm really prideful of that," he says. "I could have made a billion dollars doing every big comedy of the last 10 years and didn't, in order to form a whole other life for myself. Now I have fulfillment doing both."

Let us note now that the combined total grosses of the top comedies of the past 10 years equals only $995 million. And Hill starred as a bit part in only one of those top comedies: 2007's Knocked Up.

For how long has he been single? "Don't worry about it."

Sorry, Jonah, we'll always worry about someone who used to wear a neck beard.

"Yeah, there was probably an angry time for me. But I couldn't be a less angry person. Judd [Apatow] maybe thinks of himself that way. But I haven't worked for him in five years. I adore him. But I'm fucking 29 years old and not some angry kid."

Said Hill about the director, who one called him "angry, nerdy." And nothing says "I'm not an angry kid" than calling yourself "fucking 29 years old."

Later, he'll say, "In This Is the End, I'm overly nice in a really false way and really deep down have a lot of jealousy and nastiness and am really into my fame and success. In real life, I'm the polar opposite."

Is he high? Oh wait.