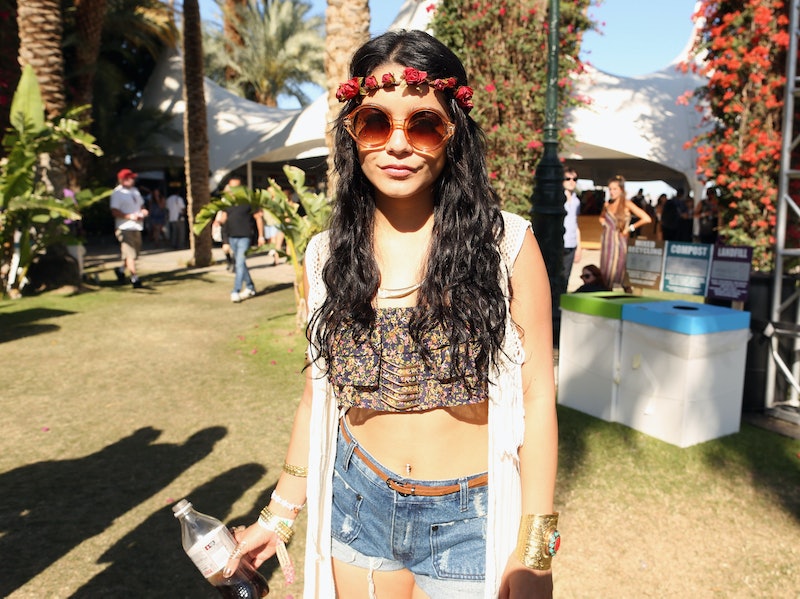 As we have seen, Coachella has acted as a major platform for celebrities to show off their best looks, whether they’re sporting flower headbands and fringe vests or fedora hats and bohemian-style maxi dresses. Yet a major trend that has been taken on by many of the female celebs attending the event this year has sparked a bit of controversy among those who believe it’s offense for festival goers to casually wear bindis. Vanessa Hudgens wore a bindi to Coachella, and took to Instagram to post pictures of herself both wearing a bindi and also revealing her bindi tan line, received some criticism from her followers who weren’t too pleased with the look.

Although she was by no means the only celebrity (let alone average person) to wear a bindi to Coachella, as we also saw Selena Gomez trying out the look, people are really taking it out on the Gimme Shelter actress.

One of her followers, @girlpsyche, said, “All the ppl saying she can wear a bindi if she wants are white or white passing” and “Insulting :\” while another, @loveanddream112, responded to someone with “@pixelfashion it is disrespectful to people. No piece of religion should be used as a fashion statement. Although you may not mind, I have seen plenty of people get upset over things like that.”

However, one Instagram user, @giorgiajrmazzarone, defended Hudgens while also noting that it’s important for the celebrity to keep others in mind, saying:

“She can do whatever she wants, I'm not against her, but this is cultural appropriation, and yes, there are people from this religion that don't mind if other religions use it as an accesories, but there are the ones that mind!! I'm not saying for her to stop, just to think about it, for exemple, I'm catholic, but I don't care if other religion use the crise ou Jesus in their necklace, but there are people that mind, because is important for them, is part of their lives!”

Hudgens has yet to respond to any of the comments from her followers (though I doubt she even will) but it seems like she’s creating a war between everyone, making me question whether or not we should find things like this offensive. Although I understand everyone’s point of view since the actress is using a bindi as a fashion statement rather than its actual purpose and for religious reasons, I also can’t necessarily criticize her.

I’m sure she means well and hopefully will just put the bindi away in the future and will stick with something that might not create uproar over something as simple as a photo. But who are we kidding, because haters gonna hate.