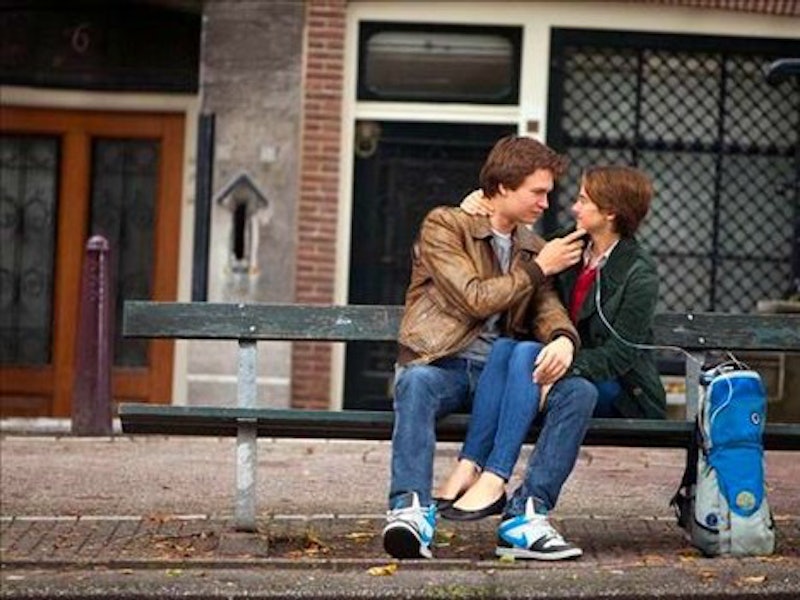 Fans of John Green's bestselling love story won't be able to breathe a sigh of relief until the movie's June 6 release, but when the first clip from The Fault in Our Stars premiered at the MTV Movie Awards on Sunday, you could practically hear millions of teens collectively say "thank god." Judging from the minute-long clip, the highly awaited movie adaptation looks like it will be just as great as the book it's based on. At least, we hope.

The clip opened on Hazel (a pitch-perfect Shailene Woodley) standing outside the cancer patients' support group with Augustus (Ansel Elgort, substantially more believable than in the movie's trailer). The two banter, Gus asking Hazel to hang out and Hazel being all "you could be a serial killer!," and then suddenly, book fans realize that this is the scene. A moment later, Gus is pulling out a cigarette carton, and before long, "it's a metaphor" is coming from his lips.

It may not have been long, but the clip did solidify some very important things: one, that the writers' stayed close to John Green's dialogue, and two, that Ansel Elgort can actually act. The trailer, as good as it was, got some fans worried that Elgort wasn't convincing as Gus, especially when paired up with the crazily talented Woodley. Thankfully, the clip proved otherwise.

Check it out below, and start counting down the days until June 6:

More like this
After 'Hocus Pocus 2', The Sanderson Sisters Are Coming to Broadway
By Radhika Menon
The 50 Most Powerful Characters In The Marvel Universe, Ranked
By Johnny Brayson and Nola Pfau
Lin-Manuel Miranda & Tituss Burgess React To 'Little Mermaid' Casting Backlash
By Radhika Menon
14 Women To Watch This Oscar Season
By Marina Watts
Get Even More From Bustle — Sign Up For The Newsletter