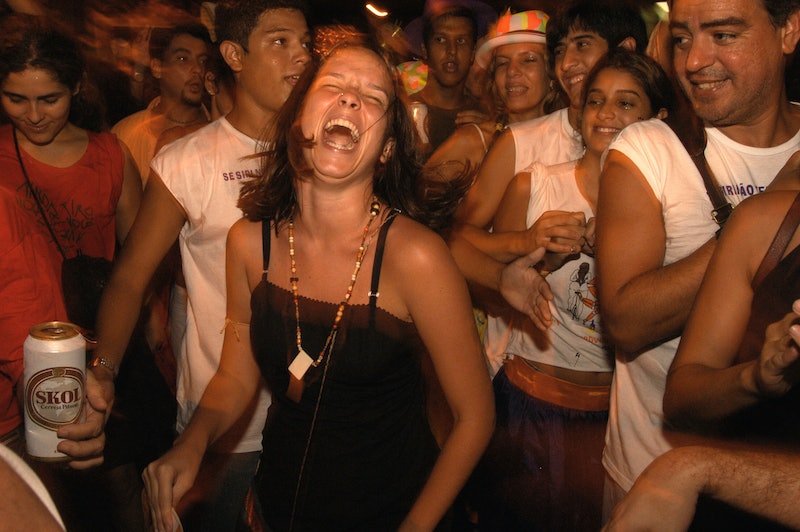 In 2007, I embarked upon my first trip outside of North America, on a semester-long study abroad program in London. I was in a dorm with nearly 100 other American twentysomethings, many of whom were too young to legally drink at home. We were loud, we were rude, and we were drunk. I remember the night we invented “tube-tending,” a neologism for the act of bartending while riding the train en route to a night out. After studying, living, and working in London for the following four years and being subjected to the shrill screams of several rounds of young yanks, I now realize how very obnoxious we were.

Of course not all of us fit the "rude American" stereotype, and our countrymen aren't the only ones who have a tendency to attract the glares of others when abroad. Being on a train with Australians and Canadians can be a similarly migraine-inducing experience. But if I’ve learned one thing in my years as an ex-pat, it’s that many people don’t have particularly fond feelings for American nationals. They don’t like our politics, they don’t like our wars, and they don’t like the ignorance that some Americans have about the rest of the world. Depending on how many drinks you’ve had and who you're buying them from, you'll hear alllll about it.

Based on experience, both lived and observed, here are foolproof tips to ensure you make the best impression on your international hosts and avoid starting World War III over a misinterpreted cultural norm.

1.) Do not wear a baseball cap inside.

In fact if you want to be safe, avoid wearing one at all. There are many ways in which you can't avoid sticking out like a tourist-shaped sore thumb (fanny pack, map, quizzical look, etc). Baseball caps are one of the most American-specific clues that you’re a tourist. You don't have to HIDE it, but definitely don't be rude about it. If you must advertise your tourist status so flagrantly, it is absolutely required that you take it off indoors. That includes trains, buses, restaurants, and hotel lobbies. It's considered rude and uncouth, so just...fit in.

2.) Learn the head of state in whichever country you find yourself.

They will all know who Obama is. They will also most likely know George W. Bush and at least one other former president. It's not your fault, dear traveler, that American culture is so pervasive that everyone from sea to shining sea knows our biznass. Like it or not, we come from the most internationally influential country in the world today (sorry British Empire of the past). Still, if you don't know the name of the head of state (and Prime Minister or President if it's a monarchy), you just seem smug.

Note: You’ll be surprised how many of the people you meet while abroad will have thoughts on our politicians and politics. You’ll also find that most of them have left-leaning opinions on what goes on in the USA. If that’s not your style, consider yourself warned. I remember a French bus driver during rush hour in 2008 who wouldn't hand me my purchased ticket until I promised to vote absentee for Obama. There’s nothing I love more than a late night comparative politics conversation, but I’ve learned that asking about their elected officials, political scandals, and voting patterns is way more interesting. And cultural learning is kind of the point of international travel right?

2nd Note: It’s a little bit funny to pretend that you looooove Sarah Palin and think she’s sooooo clever in a bar.

I have not traveled extensively outside of Europe, so I can only speak to the reactions of Europeans and Australians when you offer American dollars in lieu of their currency, and it’s not pretty. 18 European countries currently use the Euro as their official currency, so keeping the proper kind of cash on hand isn't too difficult when traveling around. Dealing with making a currency exchange may be a bit of a pain, but your taxi driver has to go through the same hassle as you do to exchange currency, and will pay the same fees. When our parents and grandparents traveled abroad, the dollar was much stronger and a little sexier than it is now. I’ve seen Americans (including *cough* family members) flash Benjamins, and it’s not impressive to anyone.

That said, there are some countries around the world where they may accept American dollars in certain scenarios, including some Latin American countries and a couple places in Southeast Asia. In these cases, let them tell you…don’t ask!

Bottom line: Learn their currency; both what it’s called and what it looks like. Give yourself a mini lesson in the coins, notes, and exchange rate upon arrival. Ask hotel or travel agency staff to assist you, but don’t assume shopkeepers and waitstaff will be as helpful.

Take note of the volume of conversation between locals and keep yours at that level or one notch lower. You’re a guest. Americans have a tendency to take up too much space (figurative and/or literal) in public spaces abroad, and when we go overseas it’s easy to forget that not everyone around us is on vacation. Many people are just living their lives; commuting, getting take-out, riding their bikes, having a post-work blind date. Fade into the scene, don’t be the scene. You get a much more authentic experience that way, and people will be more likely to want to interact with you.

Also, behave as though there’s always someone around who speaks or understands English. No one understood English when I needed help getting my luggage in Rome, but they allllll magically did when I started yelling obscenities upon finding it like this:

You and your friends are not talking in code when you’re lying on the beach in Barcelona, loudly exclaiming over the abundance of hot half-naked Spaniards.

You may see some boobs and bums on international beaches. Take the opportunity to have a cultural experience that embraces different body types rather than shaming them. One of the best travel experiences I've had was on a beach in Valencia, surrounded by drunk octogenarian topless ladies.

6.) Don’t be patronizing about cultural norms and speech.

Everyone loves a sexy accent. If an Italian person mispronounces an English word or uses the wrong tense, it’s not polite to act like it’s funny. It’s impressive that they are speaking to you in a language that isn’t their first! If a British person says something that sounds like it’s straight out of the mouth of the Queen herself, don’t dwell on how cute it is or tell them “it’s so funny that you call it a lift because we call it an ELEVATOR.” They know, and they don’t find it anywhere near as fascinating as you do.

Back when I was a foolish young undergraduate abroad, I found myself on a drunken cab ride home, doing my best J.K. Rowling impression for the cab driver, because lolz. I was confused as to why he didn’t find it incredibly endearing. “Please, keep going!” I expected him to exclaim. "This is wildly entertaining!" Turns out J.K. Rowling is a national treasure and I just looked like a dick.

Also, “throw another shrimp on the barbie” was a funny joke in Dumb and Dumber because it was dumb. If you insist on saying that to an Australian, expect to be met with at least a mildly perturbed side-eye.

It’s not the wrong spelling of behavio(u)r, it’s an alternate spelling.

The month and date are not the wrong way around, they are a different way around.

Don’t be a xenophobe.

8.) Make no more than one change to a menu item.

"Chicken Caesar salad, hold the chicken, hold the Caesar dressing, hold the anchovies, add tomato, add shrimp, light balsamic vinaigrette" does NOT fly anywhere else. Quite frankly, it shouldn’t fly in the USA. Waitstaff abroad don’t work for tips the same way they do in the states, so they aren’t as interested in you “having it your way.” If there isn’t anything on the menu that you can eat as-is, it’s safest to go somewhere else.

However, if you have an allergy to something, learn how to say it in the language of the country you’re visiting, if it isn’t English. If you have specific dietary requirements, think in advance about how to meet them in the country you’re visiting, especially if you don’t speak the language. My sister found it very difficult to communicate that she was vegan in meat-and-cheese-loving Italy, for example.

Did you get all that? Have you been taking notes? In that case, Bon voyage, babes!

More like this
6 Steps For A Successful Healing Manifestation Ritual
By Kristine Fellizar
These Are The 3 Most Mellow Zodiac Signs
By Kristine Fellizar
10 Organizations To Support On Latinx Women's Equal Pay Day
By Caroline Burke and Mia Mercado
Dyson Is Dropping Futuristic, Air-Purifying Headphones
By Rachel Lapidos
Get Even More From Bustle — Sign Up For The Newsletter