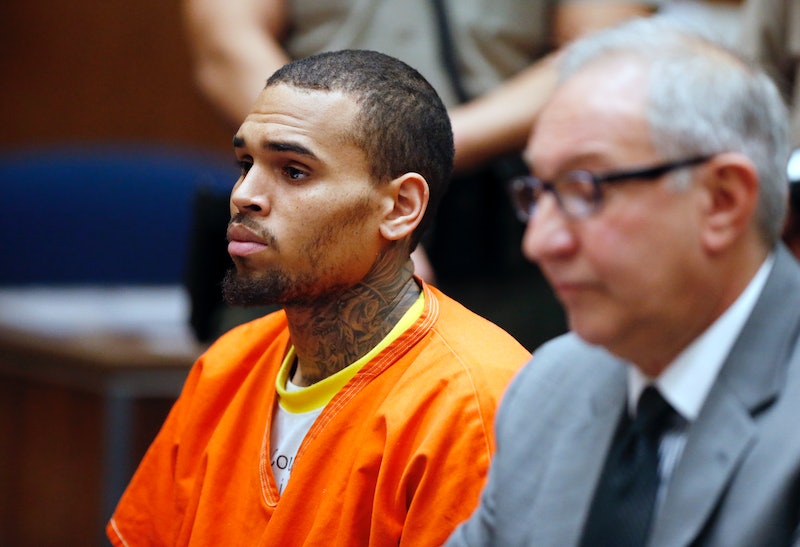 Chris Brown, tattoo enthusiast and Top 40 crooner, isn't slacking off in jail. Sure, he might be behind bars awaiting assault charges, but that doesn't mean the creative mind is laid to rest. The "Don't Wake Me Up" singer just released a video for his song "Don't Be Gone Too Long," a duet with Ariana Grande. And yes, he's still incarcerated. The video, a teaser clip for the duo's song, features Brown showing off his impressive dance moves in a dimly lit room with a single beam of light as backlight, reminiscent of Michael Jackson's video style. The robo-pop beat acts as the catalyst for Brown's moves, and he and Grande sing the chorus: "Don’t be gone too long, tell me who’s gonna love me when you’re gone?"

Is the video a not-so-subtle plea from Brown's camp to fans? Maybe. If so, it was smart to utilize Brown's fast feet for such a video. Because no matter what you think of his music, no one can debate the merits of his dance moves. Seriously, have you seen what this man can do?

Brown went to jail because of accusations that he and his bodyguard hit a man outside a Washington hotel in October. Last week, a judge rejected his request to dismiss the case, and the singer is scheduled to appear in court on April 21. Until then, he'll just be chillin in jail, releasing videos n' shit.

Chris Brown's album X should come out May 5. Watch the teaser video for "Don't Be Gone Too Long" below.

More like this
Don't Worry, Darling, Chris Pine Appears To Be Single Right Now
By Casey Cipriani and Jake Viswanath
Everything To Know About Taylor Swift’s 10th Studio Album, 'Midnights'
By Grace Wehniainen and Jake Viswanath
What Demi Lovato Really Thinks About Child Stardom, Depression, & Sobriety
By Radhika Menon
Kanye West Apologizes To Kim K "For Any Stress I Have Caused" In Rare Interview
By Jake Viswanath
Get Even More From Bustle — Sign Up For The Newsletter