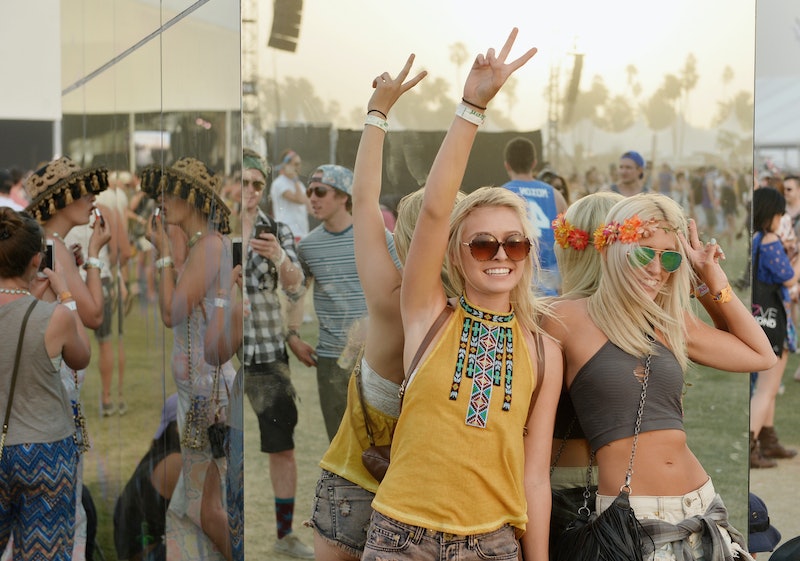 Coachella Valley Music and Arts Festival (yes, they have art there too) has been around since 1999, but over the past 15 years, the festival has changed drastically. It started as a small gathering in Indio, CA for upcoming bands to showcase their tunes, and now, artists fight to have the best spot on the lineup. Now it's one of the most profitable music festivals in the world, offers the biggest bands in the business, and last year's festival grossed a whopping $67 million, making it the highest-grossing festival... ever. So with such hype and expensive ticket sales, what sort of people actually show up for the dual weekends in the dessert? After attending weekend 1, it's clear there is a hodgepodge of attendees, so without further ado, here are the 23 types of people you're likely to encounter at the popular music (and arts!) festival.

1. Kids Looking for the Pool

Each year at Coachella, a new, weirder-than-last-year trend emerges, and this year it's pool toys. No, there aren't any pools at Coachella — but inflatable pool accessories like flamingos, palm trees, and even those multi-colored aquatic noodles are all the rage. These kids are often also dressed for the pool in board shorts or bikinis. Did you lose your beach ball? It's that w— nevermind.

Wait... you mean there's music at Coachella? The Spring Breakers are the clueless party-seekers who came for the plethora of booze and neon-colored clothes. Spring Break Foreverrrrr!

Granted, this is basically everyone at Coachella 2014. Most attendees, that is, those 18-30 girls in attendance, will either be dressed like they belong in a Lana Del Rey cover band, or they're mourning the loss of San Francisco in the 1960s. Either way, some form of distressed denim and fake flowers will be on their person.

This years festival is oozing frat boys out of every orifice. Sound gross? That's because it is.

5. The Parents (Who begrudgingly accompany their kids)

These parents feel safer taking their kids to Coachella after hearing horror stories of a sea of children in mesh crop-tops and unsupervised camping grounds.

6. The Moms (Who Show up without their kids)

They dress like the festival-goers half their age, but they have the stamina of the middle-aged person that they are. Nevertheless, these moms also go by...

They travel in gaggles and are often adorned with braces.

Sorry folks, this isn't Coachella circa 1999, being a hippie at the festival is no longer socially acceptable. Yet, these original cool kids continue to do their thang.

... Should be avoided standing next to at any concert that isn't Lorde.

It's too hot. It's too dusty. My feet hurt. The band is 10 minutes late. Is my makeup smeared? When can we eat?

We're all thinking these things, but the Complainer feels the need to broadcast their complaints to all of Indio.

You'll know this type from the slathering of white substance lining their faces, and the long-sleeves and jeans that stick out like a sore thumb among a sea of crop-tops and cutoffs.

Usually carrying giant cutouts of their favorite musicians on sticks, the Super Fan lives in the front row, pushed against the metal barricade during their performer's set, and will break down into tears without a moments notice.

It's not uncommon to see people just passed-the-fuck-out on the lawns of Coachella fields. While it may appear they have fallen from drunkeness or dehydration, the Zombies usually are strewn across the sunbathed grasses because of tiredness — the scalding sun and constant walking gets to the best of us.

Crutches? A boot? Doesn't even matter, the Injured Person is here to rage, just be careful you don't trip over their propped leg during MGMT's "Electric Feel".

One: Expected. Two: Normal. Three: We get it, you like the Beer Garden. Four: Ooh, what After Party Did you get into? Five: Wow! How do you have room for all those? Six: F*ck you, asshole.

I'm not talking a casual one or two grams. You'll know the InstaAddict by their lack of social functions, furrowed brow, and ability to trip over things with ease. This person will have neck problems by the end of Day 1 from spending a few too many hours hunched over choosing that perfect filter.

Or not hottie, but I love alliteration so I went with hottie. The hedge fund kids are those high school to college aged hooligans we've all known our entire lives. They drive to Coachella in their BMWs and are camping in a cabana oasis that makes their neighbors' covered truck look like a pile of dirt. They have the money of a B-list celebrity without the notoriety.

You may not meet him/her at the actual festival, but you'll be sure to run into these "Coachella Weekend 1 Bittttttch!" Tinder-ers on the app. Pro-tip: Swipe left.

She still goes because she loves the music, but she'll scoff at your henna tattoos and bared midriffs. Pah-leeze.

You'll get lucky if you run into these festival unicorns, as they are usually with a posse of pals and hidden under the likes of hats, scarves and bandanas. Still, Coachella is known for being a popular celebrity spot, so keep dem eyes peeled.

Cable TV actors, reality show stars and Vine celebrities will be appearing left and right. Less likely to be masked in some undicernable getup, these folk want to be seen, and will happily snap a picture with you, record a proposal video for your soon-to-be fiance, or even photobomb your pics. Here's looking at you, Aaron Paul.

23. That Person You Haven't Seen in Five Years

Coachella brings out the best and worst of us. While you may think you're headed to a weekend away in the dessert with the BFFS, be warned: That's everyones plan, and that dude/dudette you hoped to never see again will probably be standing behind you in line at the Beer Garden. It happens.