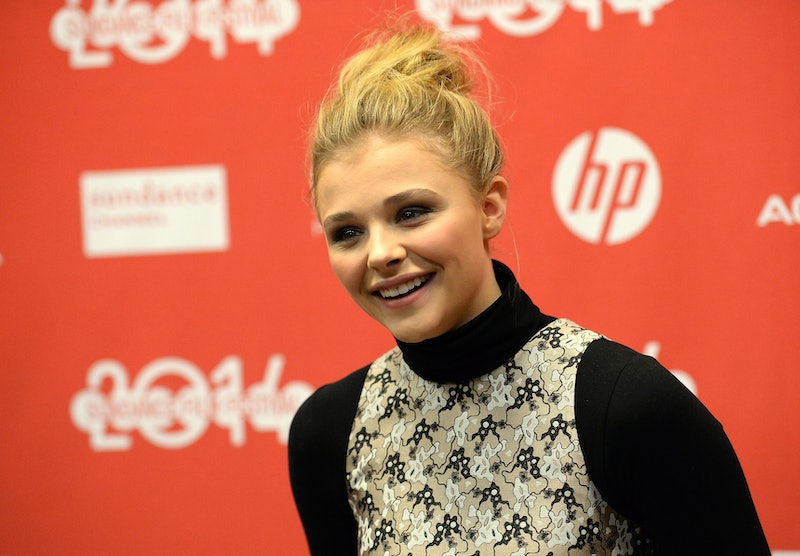 Please get your tissues handy. The new trailer for If I Stay won't let you get through even half of it without a box of them. Admittedly, when Chloe Moretz was hesitant to have this film labeled "young adult" because it was bigger than that, it seemed like a slight against the young adult genre as a whole. However, while If I Stay does deal with teenagers and themes that teenagers can relate to — first love, forming an identity, that transitional period between one cusp of life and another — it takes a sudden twist onto a road a lot darker and heavier than that.

If I Stay is the adaptation of a young adult novel by Gayle Forman, about a 17-year-old girl named Mia whose dreams of a musical career and relationship with a boy named Adam are put in jeopardy by a catastrophic car accident. While in a coma at the hospital, receiving visits from friends and family alive, Mia realizes that she must make a choice between waking up to a life that's nothing like the one she had planned or slipping away to the afterlife.

Although Moretz has an intimate, easy sort of chemistry with Adam, played by Jamie Blackley, their relationship doesn't dominate the trailer. It can certainly seem that way, as it's heavily featured and developed during the two minute clip, but all of the real spotlight is placed on Mia. We've already covered all the reasons why Moretz is leading lady material, but she is at her finest here. Moretz manages to communicate, in just a few subtle changes of expression, the rawness and depth of the conflict that Mia is facing both before and after the crash. Her casual hopefulness. Every unexpected advancement in her relationship with Adam. Her love for her parents. Her confusion and fear when she wakes up and sees her own body lying prone in the snow.

While If I Stay does have a similar set up to The Lovely Bones, at least as far as the main character spending most of the movie trapped between life and death is concerned, the trailer does more than enough to make the differences in subject matter and genre obvious. "Sometimes you make choices in life and sometimes choices make you" are the kind of arc words that will linger with people long after the credits of the movie have finished rolling.

More like this
Paul Mescal’s Family Celebrated His Oscar Nomination In The Sweetest Way
By El Hunt
The 'Scream 6' Trailer Shows Off Hayden Panettiere's Return & Ghostface In NYC
By Jack Irvin and Jake Viswanath
Here’s Everything Coming To & Leaving Netflix In February
By Jake Viswanath
Twitter Is Identifying With Sally Field & Jane Fonda’s Friendship In New Viral Video
By Jake Viswanath
Get Even More From Bustle — Sign Up For The Newsletter
From hair trends to relationship advice, our daily newsletter has everything you need to sound like a person who’s on TikTok, even if you aren’t.