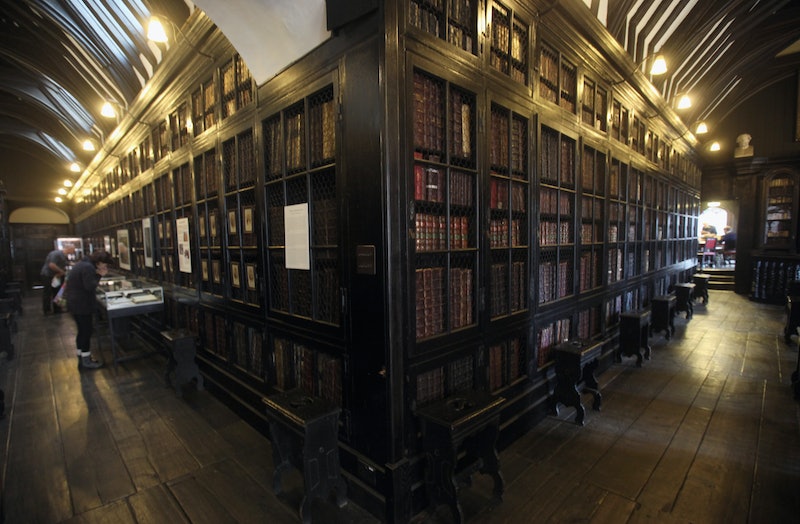 Happy National Library Week, everybody. What, no applause? I bet you didn't even know it was National Library Week. You may think that libraries are sinking into oblivion these days, but the decline and fall of the reading empire is no fault of theirs. No, the crooked finger of blame should be turned directly on us. We're the ones buying books on Amazon and losing our deep reading capabilities, after all.

Sure, reading a hardcover novel feels more difficult than ever before, because there's nothing blinking "FREE TWO FOR ONE COUPON CODES" on the side of the page, but there are still zillions of reasons to love libraries. For instance…

For every grouchy librarian that takes great pride in hissing at little kids, there's a fiercely intelligent, voraciously well-read librarian who knows where every rare book in the library is hiding. She can immediately recommend ten books you'll love, whether you like The Hunger Games or Kafka's short stories or both. See, you actually have to go to graduate school to become a librarian — it's not a casual gig. Next time you're in a reading slump, go talk to a librarian in person. Let them walk you through the library in ways you've never noticed before.

We've already been over the DVD section, and we don't need to return. But plenty of people don't realize just how many different things they can check out from a library. My travel-obsessed friend likes to check out Lonely Planet travel guides and take them overseas, screeching back from his international adventures to return them in the nick of time. My musician boyfriend tells me that many libraries have a rich selection of sheet music, from classical music scores to original Broadway musicals. And I'll be honest with you: much of my aural education as a high schooler came from checking out CDs from my beloved Thomas Ford Memorial Library — though I'm embarrassed to admit how many times I hightailed it over to their impressive selection of Now That's What I Call Music!

Well, of course the books are free. But have you forgotten how amazing that is? Entertainment and education that's accessible… for everyone? At a library, you can read whatever you want, as many times as you want, and it will not cost you a cent. That's crazy! Wait, what if they don't have your book?

4. Librarians can order almost any book in the world for you — and it will be free, too.

Have you heard of a magical little event called an "interlibrary loan?" It's not just for desperate college students who can't afford textbooks. When I was a preteen, I was dying to read a rather obscure book by George Sand called Winter in Mallorca. I was unhealthily obsessed with Chopin, and the book detailed Sand and Chopin's spooky, romantic holiday together. My local library found it for me — miles and miles away, rotting away on some mysterious academic bookshelf — and a few weeks later, I was holding a musty version in my hands.

They may be slightly dirty and a little slower than you'd like, but don't underestimate the benefit of free computers with free Internet access. There have been times in my life when I've found myself without a computer (it broke, it got a virus because I was illegally downloading music, it broke, it broke again, it really broke this time) and those times usually coincided with times I really, really needed a computer (final papers due, final papers due, final papers due, I wonder what that cute boy wrote on my Facebook wall?). Without fail, I hightailed it to the library, emailed myself the resulting work, and survived. Some libraries even have laptops you can check out, which is practically utopian.

Yes, the other people in your Basic Programming class may be a lot older and unfamiliar with the computer's on/off button, but you can deal. If you're broke and bored, you might want to check your cynicism at the door and throw yourself into a Geek Craft workshop or some equivalent artsy time-killer. And for aspiring literati, big libraries always have readings. I've seen W.S. Merwin and Isabel Allende read at my library, which you really can't put a price on. But if you're curious...

Forbes says "public libraries cost just $42 per citizen each year to maintain," and I believe Forbes. On the one hand, that's dirt cheap. On the other hand, are you getting your $42 worth? Maybe you should get that library card renewed.

8. The only limit to how brilliant you can get is your own darn self.

In the immortal and oft-quoted words of Will Hunting, "You dropped a hundred and fifty grand on a fuckin' education you coulda got for a dollar fifty in late charges at the public library." Maybe you've already gone to college. Maybe you've already gone to graduate school. But for a dollar fifty in late charges (or less, if you keep your eye on the due dates), you can become a master of the modern novel, a fluent French speaker, an amateur scientist, a World War II historian, or an obsessive, dedicated student of absolutely whatever interests you — whenever and wherever you want.