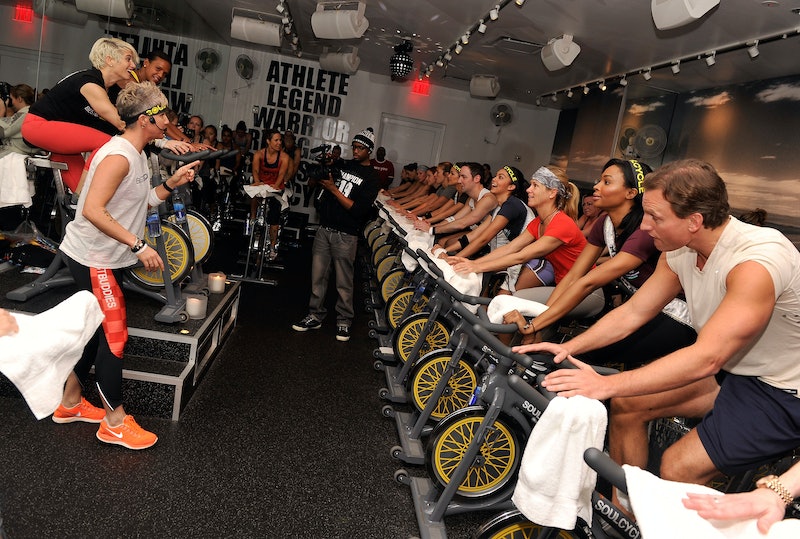 We hate to break it to you, cardio haters, but we've got one more reason why you should get your ass to the gym, stat. According to SCIENCE (more specifically, a study conducted by McMaster University in Ohio), exercise not only helps keep your skin looking young, but it also can reverse the aging process.

The results of the study, which was first conducted on mice, revealed that exercise not only prevented aging, but even had the ability to undo it. McMaster researchers found that members of the breed of mice that remained sedentary rapidly grew frail, ill and demented. They also went gray or bald. Conversely, when a group of mice were given access to running wheels, they maintained healthy brains, hearts, muscles and reproductive organs. Their fur, which never went gray, was far longer than their sedentary counterparts.

McMaster continued their study with a group of 29 humans made of both men and women from the ages of 20 to 84. They were divided into two groups and one half exercised vigorously three hours a week, while the other group was completely sedentary, exercising less than an hour a week.

After the week-long study, the researchers biopsied skin from the participants' butts (because, science). Their research found that after age 40, men and women who had exercised had "markedly thinner, healthier stratum corneums and thicker dermis layers in their skin." Translation: their skin looked and felt younger and was more similar to that of the 20- and 30-year-old participants.

While it's still unclear how much exercise (and what kind) will positively affect our skin composition, we'll look at this study's results as a friendly motivator to get moving. If anything, it could help us save money on those expensive skin creams!

More like this
Most Comfortable Underwear For Big Butts
By Audrey Williams
42 Black Owned Fashion & Beauty Brands To Support Today & Always
By Mekita Rivas, Shea Simmons, Kui Mwai and Dominique Norman
11 Graduation Guest Outfit Ideas To Wear To Someone Else’s Ceremony
By Phoebe Avison and Claire Fox
TikTok Decided That French Hair Pins Are The New Claw Clips
By Olivia Rose Ferreiro
Get Even More From Bustle — Sign Up For The Newsletter