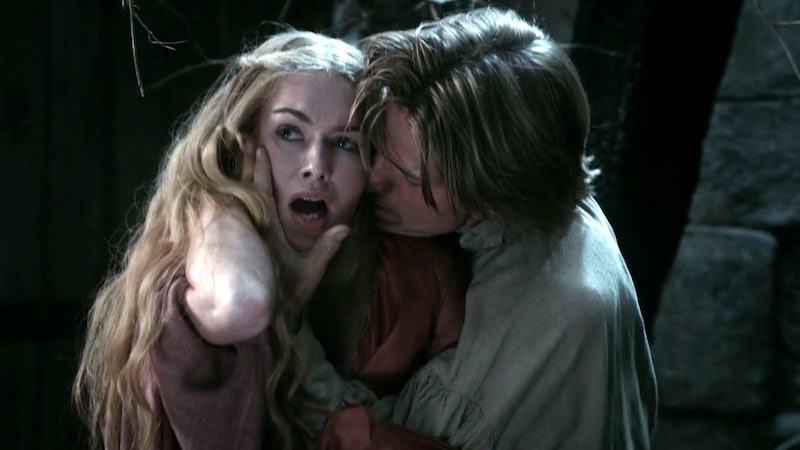 It had been a while since Jaime Lannister and his sister Cersei did the dirty. But that all changed on Sunday night's Game of Thrones , when Jaime raped Cersei on Joffrey's tomb. The incestual love birds have had their fair share of ups and downs, never moreso since Jaime has returned safely to King's Landing, without his right hand and certainly without his pride. But in Sunday's episode, he crushed the barrier of mutual respect the siblings had built, forcing his intent on a queen who would not have him.

But first, a little background: We were introduced to Jaime and Cersei's affair in Season 1, Ep. 1. The couple were having sex in tower of the castle, and when Bran stumbled upon them, Jaime pushed the youngster out of the tall, open window without a second thought. And just like that, Jaime was vilified. He's the father of the late Joffrey Baratheon, of course, so surely that says something about his character. Through the first episodes of the show, Jaime remains unlikable as a general "bad guy" character, it's not until he is captured by Robb Stark's forces we see a shift in his character's arc.

While sweet-talking Jaime's resolve remains untarnished — taunting and insulting Robb Stark when he comes to see the tied-up hostage — Jaime is soon parted from Rob Stark when Robb's mother, Catelyn, releases him in exchange for her captive daughters. Brienne Tarth, Catelyn's guard, is sent to escort Jaime back to King's landing, but along their journey they are captured by a man named Locke from House Bolton. When it becomes clear Jaime and Brienne are going to be taken captive, Jaime offers Brienne a word of warning: They will rape you, he tells her, more than once. He goes on to offer his advice: let it happen and not put up a fight. Brienne says she would fight it even if they killed her. Then, in a moment that makes Cersei's rape all the more confusing, Jaime agrees, saying if he were a woman, he would fight to the death before being raped, too.

Just like Jaime's deduction, the men of camp gang up and attempt to rape Brienne, a woman Jaime has become close to on their journey across the land. In a rare moment of chivalry, Jaime uses his quick wit for a good cause, convincing the men that Brienne is a woman of royalty, and will give them many riches if they let her go, untouched. It is this instance of good-doing that makes Jaime's rape of Cersei all the more mind-boggling: He protected a woman who was holding him captive, but when it comes to his own sister, the love of his life, and the only woman he's ever slept with, he chooses sexual violence over understanding and compassion. And on his dead son's tomb.

After the men of Bolton agree not to rape Brienne, they tire of Jaime's bargaining and show him once and for all just how helpless he really is — by cutting off his sword-wielding right hand. They force him to wear the dead hand around his neck, and Jaime says many times that he wishes to die. When he finally returns to King's Landing, he is a shell of the man he once was, the King Slayer without his slaying hand is withered of self-worth, and nearly bloodied and beaten to death. He has succumb to cruel circumstance, and when he is finally reunited with his dearest ally, she rejects him. Cersei is thrilled Jaime has returned safely, but after everything that has happened in Jaime's absence, cannot think to lay with him at night. And when their son Joffrey is poisoned to death, mother Cersei is in tears, begging Jaime to kill the man who did it (whom she believes to be their brother Tyrion). He responds by holding her, an embrace that turns to affectionate kissing, but when Cersei tries to stop his advances by begging and pleading with her brother, he won't let up, and continues to push her to the floor and have his carnal way.

We understand why he did it, after losing control of everything in his life — his pride, his limbs, his safety — his one sure thing, Cersei, also rejects him. It was his way to exert power over a single element in his life. Because as we know, rape is never just about sex, it's about power, and the need to control one's circumstance. But what's most disappointing about this scene, is how far Jamie had come up until this point. We saw him stand up for Brienne when she was to befall a similar fate. And he said himself that if he was a woman, he would die fighting off a rapist. So what gives, Jamie? You had finally become a character that audiences could root for, you had your comeuppance and now it was time for your redemption. But if we've learned anything over the series run, it's that the typical hero's journey isn't something that exists inside the confines of a George R. R. Martin novel. So while we want to see Jaime and Cersei have a healthy — albeit incestual — relationship, this will likely never be the case.