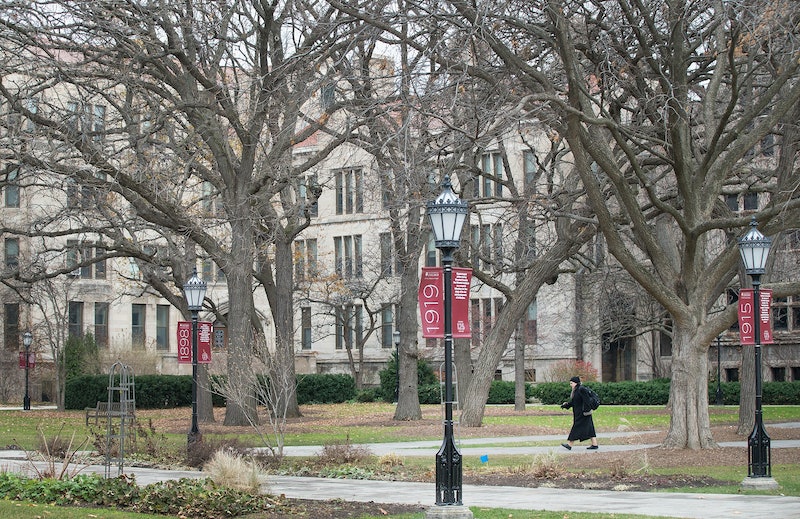 The University of Chicago may be the place "Where Fun Comes To Die," but that's because its students are so damn impressive. (Let us point you to the number of alumni who are Nobel Laureates, or the fact that Barack Obama taught here.) But no matter how many self-deprecating jokes we crack, we UChicago students know that our school is definitely a special place. (Emphasis on special.)

There are many things about UChicago that you can only understand by developing your own love/hate relationship with the school. After all, we may not be the most comprehensible bunch, but the friendships you make at UChicago can last you a lifetime. Because UChicago people are the best kind of people — that is, when they're not busy being the worst. If you went to UChicago or still making your way through there now, there are some things only you can truly understand.

This may be where fun comes to die...

...But Milkshake Day is pretty fun

You've had to explain that you don't go to University of Illinois at Chicago. No really, they are different schools.

(Incidentally, has anyone found a way to explain that we are a top ten private school and not a state school without sounding like a pretentious asshole?)

You know that UChicagoRejects.com redirects you to the Northwestern's website

When people find out you live on the South Side, they're like

But when people from the South side find out you go to UChicago, they're like

The Reg is not a library: it's your second home

It just so happens to have books.

And yes, people have sex in the stacks

It's pretty dusty back there.

Though for most of us...

The only thing that goes down on you IS YOUR GPA

(You know you have that teeshirt.)

You've been picked up by the drunk van...

And if you're old school, you were coming from the Shoreland dorms

You know, where Al Capone used to live?

You know the weirdest thing about this place...

Is actually that there are robots in the basement.

Because you'll be graduating on time, thanks.

You're living that dystopia.

Midterms may be evil, but crossing the Midway in February is just plain cruel

Everyone you went to school with is awkward. Even the jocks.

You know we're home to the original Latke/Hamentash debate. Because that's the kind of cool we are.

You aren't really committed to academic discourse until you can passionately debate the merits of different kinds of Jewish food every year for 67 years and counting.

Even the graffiti here is nerdy

Crescat Scientia; Vita Excolatur might be the official motto, but this is your unofficial slogan.:

That's all well and good in practice...but how does it work in theory?

...Until they discover what it means to be on quarter system

And that midterms aren't actually mid-term

And then they're fucking hilarious.

But it's "that Kids" that are actually the worst

Scav is not a game to you

It's war. The world's largest scavenger hunt — as verified by the Guinness Book of World Records — is like nothing you can experience anywhere else.

Hipsters have taken over all your coffee shops

Actually, they've taken over everything

Yet still, somehow, there is nothing to do in Hyde Park

Though it doesn't matter, since after second week no one has time to do anything anyway

Besides eat Hot Connie's pizza during late night study sessions, that is

You either met the person you'll marry here

Or you were sorely disappointed.

But in the end, you truly wouldn't have gone anywhere else

Call it Stockholm syndrome, or the best school on earth.

More like this
42 Things That Make Everyone Look Even Better & Cost Less Than $30 On Amazon
By Maria Cassano
These 4 Zodiac Signs Will Be Extra Lucky In October
By Brittany Beringer
5 Ways To Help People Impacted By Hurricane Ian In Cuba & Florida
By Emma Carey
Here’s Your Daily Horoscope For September 29, 2022
By Mecca Woods
Get Even More From Bustle — Sign Up For The Newsletter