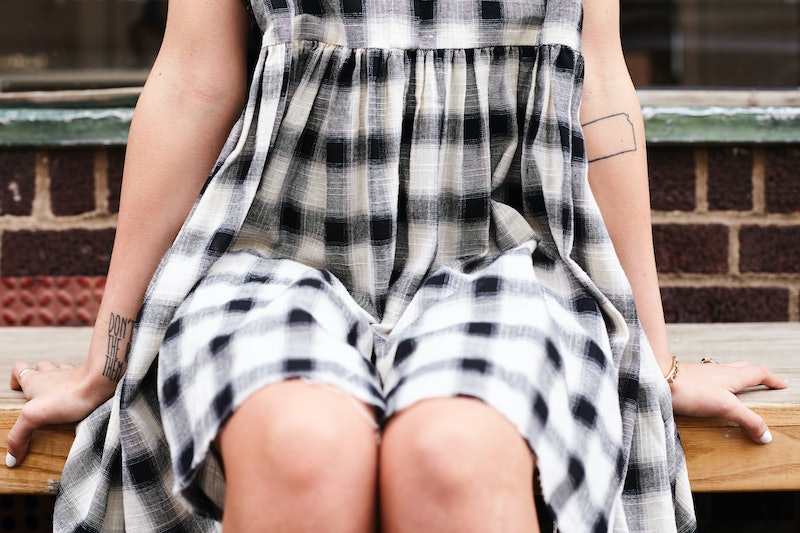 It all started with my earlobes. I couldn’t have been more than eight years old, but I already hated them. They were — and still are, because earlobes don’t change much — fat and droopy. I tried pushing them into a more desirable shape, but they never stayed that way. And even though I was a young child, I was worried. I began asking myself the same questions on repeat.

I’ll be getting my ears pierced soon, will earrings look alright in them?

Why couldn't I have my mom’s ears?

Why do I have to have the ugly, fat earlobes?

As you might guess, it was all downhill from there. When I was nine, I realized that none of the other girls in my class had knees that touched when they stood up, with stretch marks on them to boot. I decided it then and there: I wouldn't show my knees in public again.

I managed not to break that rule until I was 37 years old.

Obsessing about one part of your body is called body dysmorphic disorder, and by some very conservative estimates, one percent of the population has it. Unfortunately, I'd guess that many of us women have suffered from its symptoms at on point or another. As Everyday Health explains:

Some people with body dysmorphic disorder, or BDD, obsess about their body image so much that they can’t think about anything else...The supposed imperfection could be anything, but experts say it most commonly has to do with the hair, skin, nose, chest, or stomach. People with BDD may spend a lot of time doing their hair or makeup, changing their clothes, or exercising. Some may even get plastic surgery, but are likely to never feel as if the alleged problem has been fixed.

I certainly didn't know how to fix my knees. And besides, I had other problems.

Take the time when I was 10, and the clown at our school picnic refused to make a balloon animal for me. He didn't believe that someone as big and tall as me could actually be a child. Despite my friend's protests, I didn't argue. After all, if a grown-up decides you're a monster, then you must be one.

I entered seventh grade with the firm opinion that I was an all-around mess. I was the chubby, four-eyed girl in class who was taller than all the other girls, the most covered in zits, and the least popular. If someone was mean to me, my only retaliation was not to help her with her homework.

I remember seeing myself in the mirror in the dress. It fit perfectly, but I couldn’t take my eyes off my knees. I flipped the hem over, but there wasn’t enough fabric to lower it. I was stuck; I simply could not wear that beautiful dress.

By the time I got to college, I decided I needed to do something about all of my floppy bits. I was tired of being ignored by everyone, and so I set my sights on losing as much weight as possible. I cut myself down to two meals and two small snacks a day. Dessert was forbidden unless it was Thanksgiving, Christmas, or my birthday. Portion sizes had to follow the recommended amount on every package label. I started exercising every day without fail, and frequently twice a day, even if it meant waking up at 3 AM. Within a couple of years, I’d lost weight — 35 pounds to be exact — because who wouldn't under those conditions?

Under the pressure of my extremely-restricted diet, it's no surprise that I developed disordered eating habits. I had started binge eating. Downing five deli-sized bagels in one sitting didn’t feel good, but then gain, I rarely felt anything when I ate anymore. My guilt from binging led to more dieting and exercising to make up for the transgressions, which, of course, led to more binging.

When my disorder was at its peak, I went home for summer break. My old friend Emily had decided to pump up my wardrobe by altering a dress her older sister had discarded so that it fit me. It was a dress unlike anything I’d ever worn. It was red and fitted, in the Chinese cheongsam style, and the hem stopped right above my knees.

I remember seeing myself in the mirror in the dress. It fit perfectly, but I couldn’t take my eyes off my knees. I flipped the hem over, but there wasn’t enough fabric to lower it. I was stuck; I simply could not wear that beautiful dress.

Here I was, a young woman who’d spent most of her free time over the past three years obsessing over food and workouts. I had managed to lose a significant amount of weight, and I still hated my knees. I’d spent all those hours on the weight machine opening and closing my legs until I felt sick ... and I still thought my knees were ugly.

I looked at myself in the mirror, and I realized: There will always be something. No matter how hard I try to be perfect, I will always be able to find something wrong with body.

I looked over at my beautiful friend Emily, who was trying to work as a model, but was constantly being told that her hips were too wide. Her less-than-half-the-width-of-my-hips were too wide? I realized that for every woman who is touted as the world’s newest ideal of perfection, there are always the vocal opponents who will say she is too skinny, too curvy, her nose too big, her teeth not straight enough.

And so, in that moment, I decided to end the cycle. I stopped counting every calorie and fat gram, and concentrated on thinking and feeling when I ate so that I could regain a sense of when I was full. I stopped my twice-a-day workouts and settled on one good sweat session, most days. I began to try very hard to stop seeing all my perceived physical flaws as character defects that meant I was too lazy, too stupid, or too unworthy to change.

Don’t misunderstand, I still have difficult days. Days when I can’t ignore the varicose veins I got from working on my feet all day. Days when I wish my boobs would stay where I put them after removing my industrial strength bra. Days when I refuse to glance in the mirror after showering.

But there are also now days when I put on my one pair of shorts. I expose my knees and wobbly thighs, and walk out the door with my head held high. And for me, that is progress enough.

Editor's Note: If you think you're suffering from body dysmorphic disorder or an eating disorder, you can seek help here. You're not alone.