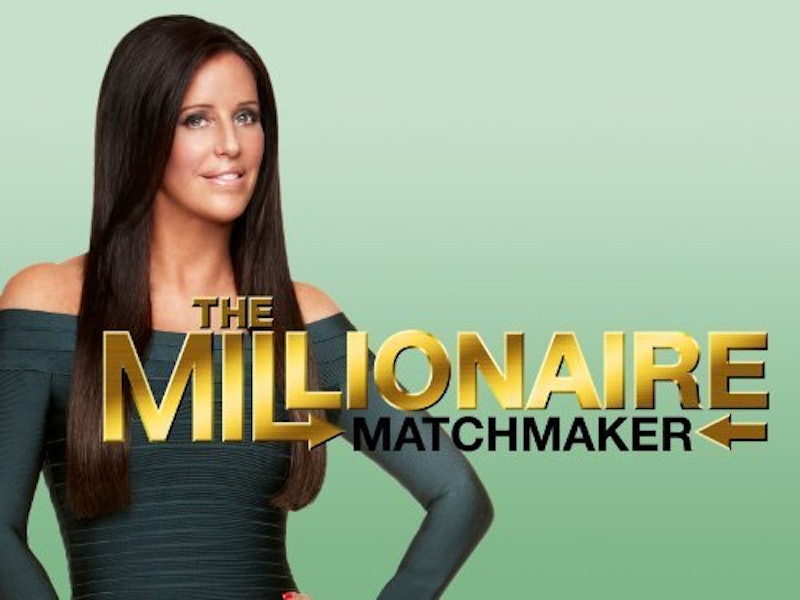 But those are all things that I don’t like. There’s one — just one — thing that I do like about Millionaire Matchmaker: the romance. OK, nothing about the show is particularly romantic, but out of the two staged dates every episode, one almost inevitably ends up dating past their episode, or so the captions tell me. In Season 7 in particular, those check-backs with the couples right before the credits roll have offered photos of the happy pair touring Tuscany or visiting each other when they live on different coasts or just generally being rich and half-beautiful together.

What they’re really offering isn't the continuation of a love story, but proof. Proof that, while The Millionaire Matchmaker is obviously staged within an inch of its botoxed life, Stanger the “third generation matchmaker” still knows how to find love for two sad, empty souls. I live for those last two minutes when it’s revealed whether the couples have continued to date or not; it simply doesn’t get much better than hearing that Courtney Kerr from Courtney Loves Dallas plans to go to Norway to visit her fashion mogul also-a-Millionaire match.

But did she really go visit him? (Spoiler alert: She did not.) Do the little glimpses of success we usually get from one of the couples per episode really unfold into epic love stories? (Cover your eyes and close the page if you’d like to continue to watch The Millionaire Matchmaker in blissful, tacky ignorance.)

Other than the disasters that the show happily airs — my brain will perhaps never scrub from its limited memory capacity that Hello Kitty-loving millionaire, Robin, trying to give her gold digging plumber date a handy under the dinner table — plenty of its successes end somewhat disastrously, as well. Season 1 of the show infamously ended in a marriage proposal between millionaire Paul Murad and Cidney Carson after their first date that was then even more infamously called off immediately following the episode's airing a few months later. Paul was angry that Cidney was a Playboy Cyber girl, which she says both he and Patti were fully aware of; Cidney was angry because Paul allegedly had another fiancé… and maybe wasn’t a millionaire. Eh, semantics.

And so go most Millionaire Matchmaker engagements, of which there have been a few made, and the exact same amount called off, sans one (stay tuned).

Most of the Millionaire Matchmaker relationships go out not with a bang, but with a whimper. It all begins under too much pressure; the distance is too far; someone gets deported. You know, your general "we just fizzled out" fare. So how does Patti still claim a 99% success rate? She says she has a real club with real clients, who would never agree to be on a reality show. They must be the ones getting married! (Or not.)

As far as I can tell, exactly two successful relationships have formed via The Millionaire Matchmaker. The first was featured on the 2014 season, when former NFL player, Mitch Berger, dropped by Patti's office with his date from Season 6 and now wife, Bambi Lashell. The thing about Mitch was he was just a really nice guy. He seemed to be on the show to get a little TV cred to try and advance his post-NFL sportscasting career. And then he accidentally fell in love with a nice swimsuit model. You'd think that would inspire Bravo to bring on more nice millionaires for more happy endings, but you would be wrong.

The other accidental love connection grew when chef Khristianne Uy, winner of The Taste on NBC, came on as Patti's first lesbian millionaire client. She didn't continue to date the woman she went out with on the show, rather she later reconnected with a woman she had barely spoken to at the Millionaire Matchmaker mixer. Her mixer friend was still there on the show and I'm counting it! Khristianne and Brittany Weiner now live together and have been dating for almost two years.