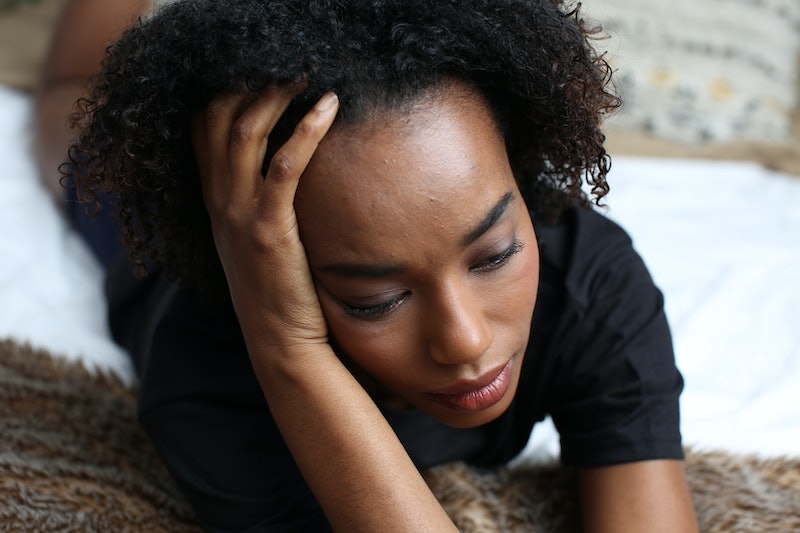 After the end of a relationship, it’s totally normal to feel depressed and think that you’ll never find anyone you like or love as much. There may be days, weeks, or months during which you listen to Adele's "Someone Like You" on repeat and sleep with a sweater that still smells like your old flame.

But what if these thoughts and feelings become overwhelming? At a certain point, you have to ask yourself: Am I still in love with him or her? Instead of tossing and turning all night trying to figure it out, check out our list of six ways to know if you’re definitely not over your ex.

Note: None of these items is a sign that you’ll never get over him or her, or that you should try to get back together. The topic is complicated, so make sure to talk out your feelings with a friend or therapist before making any decisions.

1. It’s been a long time, and you’re still thinking about him or her

You’ve likely heard someone say that it takes about half the time the relationship lasted to recover from the breakup (and some psychologists actually support that idea). But the truth is that the time it takes to get over an ex depends on a few factors, including the intensity of the relationship and your role in it. In general, though, if it’s been years since the end of a six-month relationship and you still feel attached to your ex, you might want to seek professional help.

2. People are sick of hearing you talk about him or her

It’s unrealistic to think that, after a breakup, you’re never going to think or speak about your former partner ever again. But if you’re constantly finding reasons to mention his or her name and the experiences you shared, it’s a sign that you probably aren’t over your ex, according to marriage and family therapist Joan Sherman, L.M.F.T. Since it can be hard to gauge how much you talk about your ex, go by what friends, family, and even new romantic partners say. If they think it’s a problem, it probably is.

3. You’ve been in romantic relationships with other people, but still feel bound to him or her

Research suggests that starting a relationship with a new person (when you’re ready) can help you get over a breakup. If you find that you’re having trouble with this new relationship because you’re constantly comparing your current partner to your old one, it could indicate that you’re still attached, Sherman says. Similarly, she adds, “If you start to feel feelings for somebody, and then you squash them because it gets too scary,” that could also be a sign that you're hanging on to your ex.

4. Your ex is the first person you think of when you’re upset

When you date someone for a while, you start to rely on him or her for emotional support. After you break up, you have to find new sources of that same kind of care.

According to relationships researcher Samantha Joel, “the main telltale sign that someone is still attached to their ex is how readily their ex enters their mind when they are anxious or upset.” In other words, if after a bad day at work, all you want to do is call your ex and vent (even though your mom and your BFF are first and second on speed dial), it might be an indication that you still have feelings for him or her.

5. You can’t see anything negative in the relationship

Even the healthiest relationship is bound to have some weak points. One way to know if you’ve started to get over an ex is if you’re able to evaluate the relationship realistically. That means recognizing its negative as well as its positive qualities.

Says Sherman, “If you’re not willing to look at how that relationship helped you and also didn’t help you … then that’s a little bit of a question for me.” In fact, one study found that people who were able to think something negative about their partner a month after breaking up were more likely to have an easier time adjusting to the end of a relationship.

6. You’re really busy, and you still feel like something’s missing

When you’re grieving the end of a relationship, keeping active and working toward new goals is crucial, says psychologist Kelly McGonigal, Ph.D. It’s not that you want to completely distract yourself from your negative feelings, but having too much time on your hands can make it harder to remember that there are other parts of life you actually enjoy. If your calendar is filled with training for a half marathon, happy hours with pals, and volunteering at your local soup kitchen, and you’re still pining for your ex, your feelings might be stronger than you’re willing to admit.

Want more of Bustle's Sex and Relationships coverage? Check out our new podcast, I Want It That Way, which delves into the difficult and downright dirty parts of a relationship, and find more on our Soundcloud page .