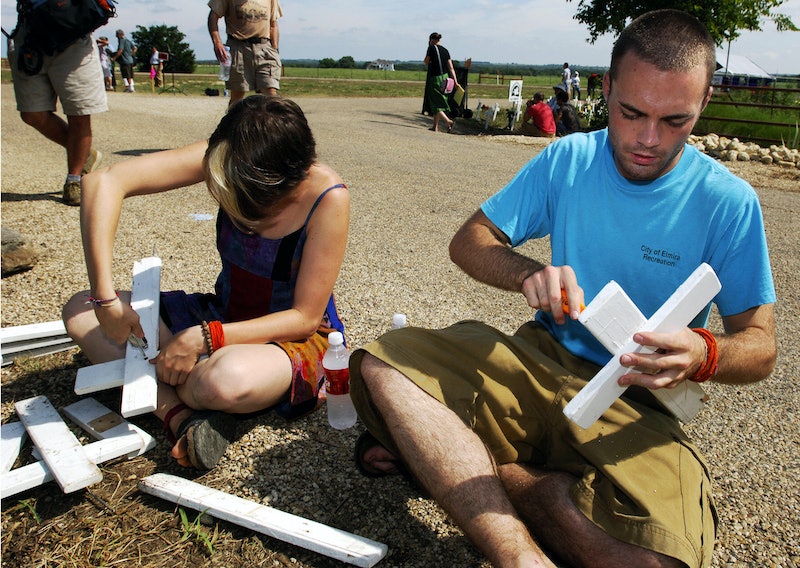 The life of an Ithaca College student is an interesting one, to say the least. There is something very peculiar, yet fantastic, about going to college on the South Hill. Ithaca, N.Y., for those of you unaware, is a city nestled at the bottom of Lake Cayuga in Upstate New York. It has been rated as the No. 1 collegetown on numerous occasions and has a quirky culture incomparable to your typical student-dominated area.

While the prestigious Cornell University is just a stone's throw away, don't get it twisted: Ithaca College is the best. As I get ready to graduate in T-minus 30 days (God help me), I've come to realize there are some things only we IC kids can truly understand.

You know you go to Ithaca College when ...

It begins in late October and doesn't leave until May ... maybe.

Is it a fish? A face? Whatever it is, it's supposed to be art.

Tuesdays are always associated with tacos

You have Late Night to thank for that.

You're kind of sad that we don't have a mascot

Remember the mascot search? We had three contenders — the phoenix, the flying squirrel, or the lake beast. I'm not kidding. And then President Rochon called off the search. What a disappointment.

You roll your eyes at any "Ithaca is Gorges" T-shirt, bumper sticker, hat, etc

And all of those fun spin-offs like "Ithaca is Cold" and "Ithaca is Gangsta." Over it.

Going to Collegetown bars instead of The Commons is an adventure

You worship Viva Taqueria and The Ale House

And for seniors, it was registering for a Senior Week wine tour. All of the struggles!

You start going to Moonies and Second Floor sophomore year, because house parties just suck most of the time

Sometimes the swim team hosts a fun rager, but that's about it.

You don't know the name the gorges, you just refer to them as "the gorges"

As soon as the sun comes out and it's above 60 degrees, class becomes optional

You realize that the Athletic and Events center is basically a giant, middle finger to Cornell

Coincidence? I think not!

A day you won't be telling your kids about. Unless they find you on YouTube.

They were always so sketchy and so broken.

Every complaint about the school is met with "I pay $50,000 a year for this to happen?"

When the fountains get turned on, your Instagram feed blows up with pictures of them

It's the same photo, no matter what filter you put on it.

You've seen it be 80 degrees one day, and 30 degrees and snowing the next

The weather will toy with your emotions — no question.

You had no idea what Therm was...

You have a crush on someone in one of the a cappella groups.

Cortaca isn't about football, because we end up losing anyway

Win or lose, we always booze.

Your sunsets are unbelievable, if the clouds aren't covering it

Taken by yours truly the other night.

You discover Dolce Delight and it's love at first breakfast sandwich

...Because Ithaca has become your home.