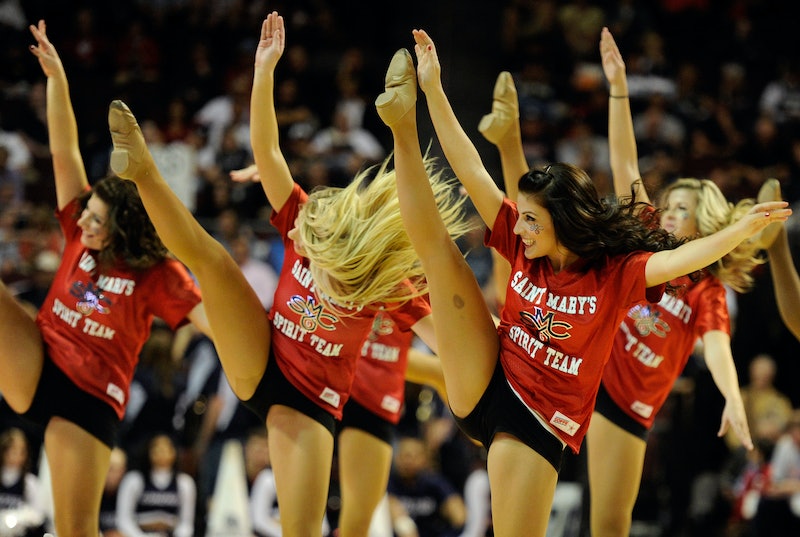 When I moved to New York, I learned something very quickly: Telling people you were on a competition dance team in high school was basically the most uncool thing one could do. It was akin to telling someone you wear pink on Wednesdays, you think ponytails are lazy, and a Sex on the Beach is, like, your favorite drink in the whole universe!!! So, after graduating from NYU and moving to Brooklyn, I stuffed that part of my history into my metaphorical knapsack of secrets, dishing it out only to best friends, my dog, and the one ex who I thought could handle that precious information.

But since then, I've grown up a bit and learned to give less of a shit. So what if the idea of being on a dance team creates certain assumptions? Does it mean I have to stop drinking whiskey neat? Am I not allowed to scarf down buffalo wings while watching my sad 2014 Lakers attempt to accomplish anything? Hell no it doesn't.

Not only am I a slightly-salty, whiskey-slinging Brooklyn broad, I'm also a proud former dance team girl. Some of my best friends, best memories, and most important lessons about self-image and self-respect came from being on the Orange Glen High School dance team, caravanning up to Anaheim Convention Center for Nationals, and dressing up as a giant meatball for my team's "On Top of Spaghetti" novelty routine.

Few memories are greater than the ones we made working hard and perfecting routines with some the greatest people you will ever meet . Amirite, ladies? Yes, if you were into competitive dance, there are just some things only you can truly understand.

You’re Used to Hearing “You’re not a ballet dancer? So are you, like, an exotic dancer?”

And giving the biggest eye roll known to womankind.

And the follow-up question “You wear tiny outfits though, right?”

This skirt and bloomers combo is not for your amusement. It’s for leg hold turns, you rube.

Nothing is better than brand. new. jazz pants.

...Even if every time you order them on Discount Dance Supply you have to buy like 15 other things

It's only $2.95 to ship everything. How could you not get these, too? You know you can rock them.

And on the train. And in the passenger seat of your friend’s car. And while you were taking a nap on the couch.

You Have Far Too many stories that start with “This one time, at Dance Camp…”

Just kidding. There’s no such thing as too many dance camp stories.

How else are those judges going to see your gorgeous smile across the arena?

And you did it as another dance team ran through a routine while shouting 5-6-7-8 in unison five feet away. Easy as pie.

Even if it makes you sweat and does that annoying “zip, zip, zip” sound every time you move your arms.

Your caboodle may as well contain the meaning of life

Because you spent approximately $350 at CVS buying every possible thing you could ever need.

Because they all look exactly the same.

No matter what your performance costume looks like, you know you can make it look hot

What? Our routine is to "Welcome to the Jungle."

And your whole team knew all the words to every song.

Because you only practiced the routine to “Barracuda” 30 times a day for four months of your life. No biggie.

Made ten times worse if your team dared to choose Britney Spears’ “Toxic.”

...And the subsequent, yet potentially over-confident sense of relief afterwards.

You can always predict the “and now here are a thousand fouettes” section of any routine.

You know Jazz sneakers are a necessary evil.

How else are you supposed to do that triple turn on asphalt?

But nothing is worse than lace-up jazz shoes.

Years of dance training have given you an epic sexy walk

You act demure, but you absolutely love it when someone at a club or bar sees you and asks if you used to be a dancer

And even if you've stopped dancing competitively, you know you'll always be a life-long dancer.

Because that's who you are.