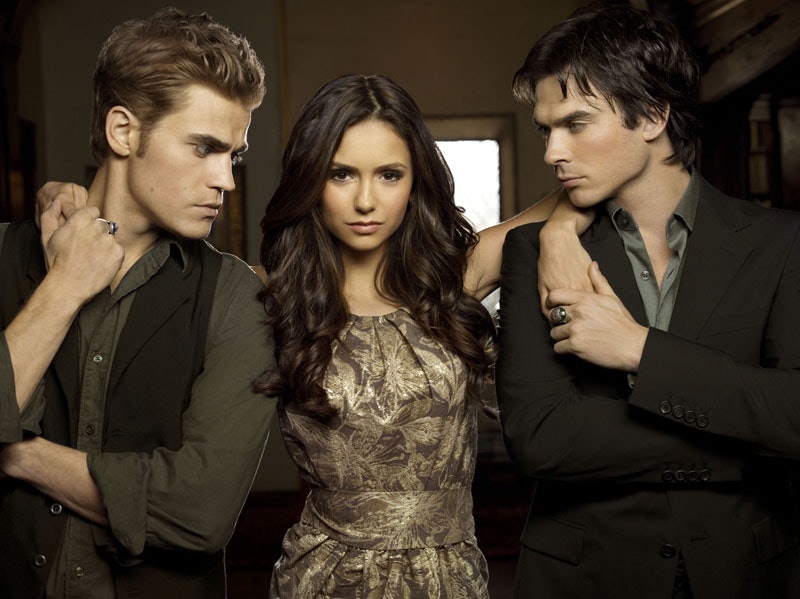 This week, The Vampire Diaries returned with "Resident Evil," an episode sure to have Stefan fans in a tizzy. Not only was the episode directed by Real-Life Stefan Paul Wesley (seriously), it also marks a (kind of, sort of) return to the era of Stelena, or, for those of you not versed in ship names, the Stefan and Elena relationship. Of course, Stefan and Elena aren't really back together. But no one on The Vampire Diaries is ever really together, or at least, not for long. Happiness is an illusion or a stopover on the way to profound misery. This isn't just because TVD is a supernatural drama, it's because it's on television. At the heart of almost every must-see television show, regardless of genre, festers an intense will they/won't they relationship. On Friends, it was Ross and Rachel.

On Gilmore Girls, it was Luke and Lorelai. On The X Files, it was Mulder and Scully. The will they/won't they courtship is a cross-genre staple of modern television. But teen dramas have capitalized on this concept in a uniquely addictive way: the Love Triangle. You can probably name several off the top of your head, most hailing from the world of teen television and young adult fiction. Edward/Bella/Jacob. Dawson/Joey/Pacey. Peeta/Katniss/Gale. While other genres are apt to throw in additional love interests for their stars to fuel the "won't they" portions of their will they/won't they's, few develop true love triangles. No matter how many potential loves came and went for Ross and Rachel over the years, no one was ever vying for either of their attention consistently enough to pose a real threat to the OTP (One True Pairing) status. Most fans were on the same page: They wanted Ross and Rachel together by the series finale, or there would be hell to pay. In teen-oriented fiction, this isn't always (and more and more frequently, it's actually uncommonly) the case. Teen fiction isn't afraid to pit fans against one another, create Teams and break hearts when final decisions are made. It might be devastating for those on the "wrong" team, but the back and forth and the strong sense of fan investment on both sides feeds into a frenzied obsession.

The Vampire Diaries is one of the best examples of this phenomenon on television today. Its writing staff not only embraced the idea of the love triangle, but they've mastered the art of the back and forth that keeps fans interested but on their toes. They give the audience just enough to make them think, against their better judgment, that this time things might work out before pulling the rug out and destroying everything.

This isn't only true of the Damon/Elena/Stefan triangle, though it is the best example of it. What makes TVD's central love triangle so engaging is its believability. Those on the "losing" teams are usually the optimistic underdogs. Maybe you love Jacob Black or Gale Hawthorne, but did you ever really believe that Bella Swan wouldn't choose Edward Cullen or that Katniss Everdeen would abandon Peeta Mellark? On The Vampire Diaries, the romances evolve with the characters.

At the beginning of the series, Elena is a sweet high school student who falls easily for Stefan Salvatore, AKA the "Good Brother." Stefan and Elena are in love and as happy as anyone ever is on a show like TVD, but Elena always feels an unwanted attraction to Damon "The Bad Brother" Salvatore. As Elena changes, so do her feelings about Stefan and Damon. The genius of The Vampire Diaries isn't that it makes a great case for either of the Salvatores, but that it gives the audience ample reasons against both.

Stefan might seem like the perfect boyfriend, but he never challenged Elena and he wanted her to be something that, eventually, she just wasn't. Damon and Elena have enduring passion, but they're toxic for each other. Unlike many series geared at teens and young adults, the characters in Mystic Falls aren't static. They're always changing and evolving, which is what keeps us so invested in their relationships.

So, after a season of Damon and Elena realizing their failings as a couple, it's only natural that the show would start to steer us back toward Stefan as a match for our heroine. So far, the Stelena reunions are happening safely beyond the realm of reality. When Katherine possessed Elena's body, she tried to seduce Stefan. This week, Stefan and Elena were "plagued" by sexy visions of each other. In this way, the show is able to tease Stelena fans and keep them hooked without really staging a reconciliation.

For now, Elena, and, to a lesser extent Damon and Stefan, are living in a limbo land. The characters aren't who they were a year ago, but they haven't quite figured out who they are today. When Elena first (SPOILER ALERT) became a vampire, she needed Damon. She was exploring a darker side of herself and coping with the loss of everything from her own life to her little brother and her childhood home. Now that she's come to terms with these things (and one very major drama has been reversed), does she need Damon? Does he hold her back? These are legitimate questions that are arising as Elena evolves, not superficial conflicts dropped in by the writing staff to explain a breakup. These are also the kinds of questions that keep fans genuinely unsure as to how Elena's love story will end.

From the beginning, I've been Team Damon, but as much as I screamed with delight when Delena finally happened, I was also a little devastated when Elena left Stefan on the porch and called it quits. I clutch throw pillows when Damon and Elena have a breakup-worthy fight, but I was also really hoping that Katherine would succeed in seducing Stefan (something that would have been devastating for Delena's relationship, for which I'm usually rooting). I think it's because Stefan and Damon are both right for Elena, and they're both wrong for her. Like in real life, different things have been "right" for her at different times. And that's why I won't be able to quit on The Vampire Diaries before its finale. I can't predict who Elena will choose in the end because I can't predict who she'll be in the end. And that – a strong, well-rounded and ever-evolving character – is the secret to a great love triangle.