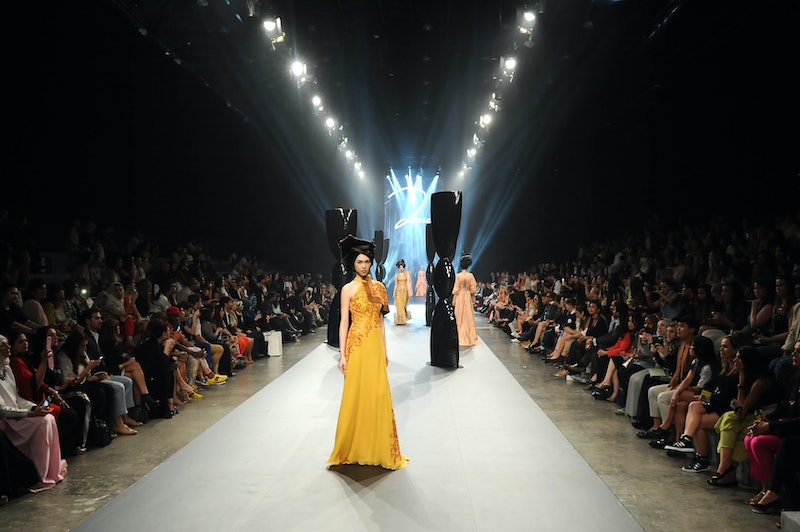 Every major city in the world is vying for the title of Fashion Capital. London, New York, Milan, and Paris always keep themselves in the fight, but despite being the names to which we always turn when we're talking about high style, they're not the only the cities throwing down on the international stage.

Dubai, arguably the most glamorous city in the world, is making a lot of noise, too — and in the best way possible. It's using its premier fashion event, Fashion Forward, as the platform by which Middle Eastern talent gets their moment in the international spotlight. Fashion Forward 2014, which wrapped up earlier this week, encompasses more than 40 events, including numerous fashion shows, presentations, social events, panel discussions, and talks from industry experts from around the globe.

Fern Mallis, the creator of New York Fashion Week, talked to WWD about the current state of Middle Eastern fashion and the incredible potential for growth there if certain issues are addressed:

Dubai is in the right place at the right time. The Middle East is one of the fashion industry’s most vibrant markets. A third of the world’s couture clients come from the Middle East. The world’s top fashion brands are not only courting you, they are here.

Still, local designers will face the same challenges their peers in New York did two decades ago: identifying potential buyers and an audience to support them.

Being that many regional designers don't have the millions of dollars needed to show in Paris or Milan, Fashion Forward serves as the cornerstone fashion event for veterans, as well as a seal of approval for emerging talent. It's opened up lots of doors for these designers in the same way that New York Fashion Week, which has grown to encompass up-and-comers as well as stalwarts, has in the past few years.

With all this talk of Fashion Forward, here are seven designers who presented this year that are poised to be the leaders in this new Middle Eastern fashion movement.

Designed by three brothers of Iranian origin, the line is known for its crisp patterned suits and Burberry-esqe aesthetic.

U.S.-born and Lebanese-raised Rami Kadi is all about the glam. Focused mainly on evening wear, his gowns need to be on somebody’s red carpet.

Of all the designers presented, Zareena’s collection seems the most inspired by traditional Middle Eastern and Indian style. The fabrics are mind blowing.

The moody prints and geometric construction of Assaf’s collection is nothing short of amazing. He sits right at the crossroads of classy and edgy.

Sabaji may be the Middle East’s answer to Alexander McQueen. His clothes are like dreams.