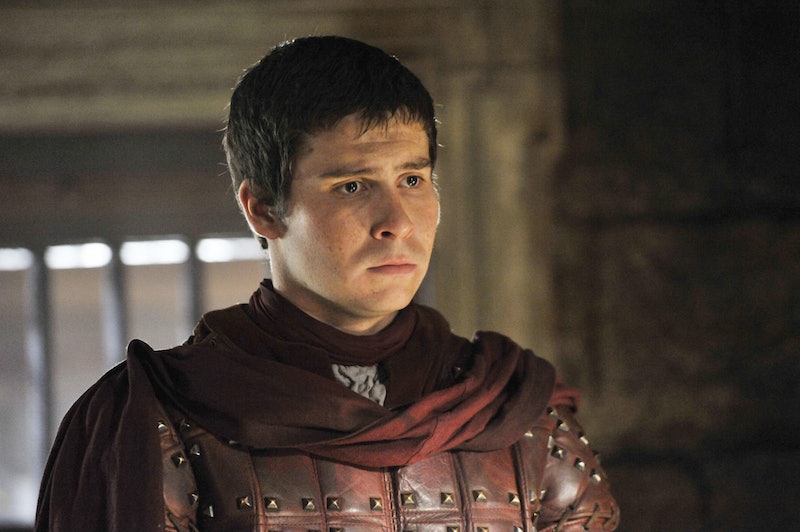 The poor women of King's Landing. On Sunday night's Game of Thrones , we may have seen the last of loyal squire, sex god, and certified babe Podrick Payne — for a while, anyway. If he doesn't lose his head for defending Tyrion's innocence, he'll be following Tyrion's advice and getting the heck out of dodge (where dodge = King's Landing). And so we say a fond farewell to Game of Thrones' most unlikely hero; the man, the legend, the-maybe-soon-to-be-Ser Podrick Payne.

Podrick's impending departure had a lot to compete with, between the umpteenth instance of Danaerys being a badass at a city's gates and the really horrifying rape scene, but it marked a serious tonal shift in the show. Sure, Game of Thrones has never been a dove-filled cake-walk, but the death of Joffrey has cast a sort of— forgive the pun— deathly pallor over the rest of the series. Podrick was a source of comic relief, of heart, and of a stable loyalty that so rarely survives in Westeros, and his absence will be felt.

Here are five reasons why our boy Pod might have been the best character Game of Thrones will ever know.

The bromance between Podrick and Tyrion is nothing short (phrasing) of epic. Not only did Podrick save Tyrion's life at the Battle of Blackwater, Podrick is once again willing to risk his head on a chopping block if it means keeping Tyrion safe. Not many people in the Game of Thrones world are concerned with anything beyond what's in their beset interest.

He Can Keep A Secret

Podrick was one of the only people who knew about Shae... and he never said a word, even if telling Tywin or Cersei could have elevated him to knighthood.

He's Got A Great Sense of Humor

He's one of the only people unafraid to be publicly amused by Tyrion's jokes- even when they're at the expense of the late king.

Even attempting to sneak Tyrion wine could have gotten Podrick killed on the spot, and yet the squire did it anyway. If he lives, Podrick's bravery could make him a great knight, and an excellent addition to the Lannister army.

He is so good at sex, prostitutes will work with him for free— but Tyrion and Bronn had to pry that little tidbit of information out of him. That's a classy guy, right there.

More like this
'The Simpsons' Will *Finally* Address How They “Predict The Future”
By Sam Ramsden
Does 'Locke & Key’s Ending Mean There Could Be A Season 4?
By Sophia Moore
Gwendoline Christie’s Partner Is Part Of Royal Family History
By Parry Ernsberger and Sophie McEvoy
Netflix Just Rebooted A Classic ‘90s High School Drama
By Maxine Harrison
Get Even More From Bustle — Sign Up For The Newsletter