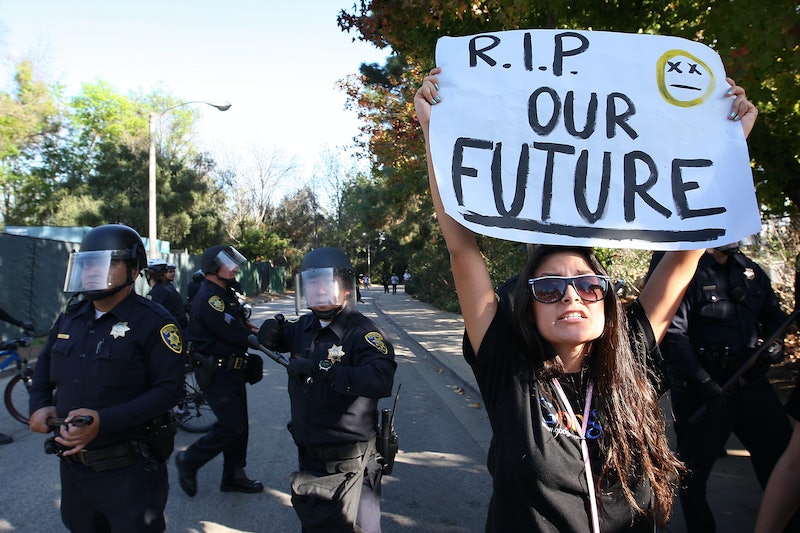 Students with co-signers on their college loans are being told to pay their debt in full if the co-signer dies — or declares bankruptcy. Oops, didn't see that one in the fine print! Many private loan providers have clauses in loan contracts about how something like this could happen, despite the fact that many students aren't aware of it.

This has been the top complaint filed by graduates to the Consumer Financial Protection Bureau, which is recommending private lenders, dominated by financial giants like JPMorgan Chase, Wells Fargo and Citigroup, to consider alternatives than instant default. Even though some of these companies do allow a co-signer to be removed from a loan if payments have been received on time, the companies make it difficult to do so.

But in the grand scheme of things, it's just one more potential roadblock for the 39 million people who are responsible for paying a piece of the $1 trillion student loan pie.

Sure, there are students who are employed right out of college and can begin paying down their student loans. There are even students who are able to pay their loans back quickly, particularly those who make up the 40 percent who have loan balances under $10,000. There are even ways for graduates to have part of their loans forgiven if they work in certain public sector jobs, and the federal government now offers loan forgiveness programs. But that doesn't mean we aren't all standing knee deep in a debt crisis.

For one, some of those federal loan forgiveness programs are being reined in due to concerns about the program costs, and how it may encourage colleges to bump up tuition even higher. In the last six months alone, enrollment increased by almost 40 percent and now encompasses 1.3 million graduates. That's a lot of money for our federal government and tax payers to pay back when we have a trillion dollar deficit. Plus, the student loan debt crisis now surpasses credit card debt in the U.S.

The unemployment rate in the U.S. isn't helping matters much, either. As more graduates are having a difficult time getting a job right out of college, their efforts to pay back students loans are hindered. That only seems to be adding to the wealth gap — graduates with little to no debt are making investments in homes and retirement plans that their student loan peers can only dream of one day achieving.

Of course, this doesn't mean a college education isn't worthwhile. According to a Pew Research Center analysis, college graduates who are working full time can make roughly $17,500 more per year than their peers who opted against college. But the debt crisis only continues to fester, and it is high time for our country to figure out how to fix it.

In the meantime, graduates will be forced to shoulder the burden of their student loans as best they can, and even consider working two low paying jobs (if they can even find them); moving back home to save on rent; and even exploring the world of network marketing.

More like this
These Swimsuits & Cover-Ups Look So Good On, You'll Wear Them Constantly
By Sara Brown-Rigoli
Every Single Big & Small Way You Can Fight For Abortion Rights
By Tess Garcia
Police Shove 'Full House' Star Jodie Sweetin At An Abortion Rights Protest
By Radhika Menon
5 Ways To Stand In Solidarity With Women In America From The UK
By Sophie McEvoy
Get Even More From Bustle — Sign Up For The Newsletter