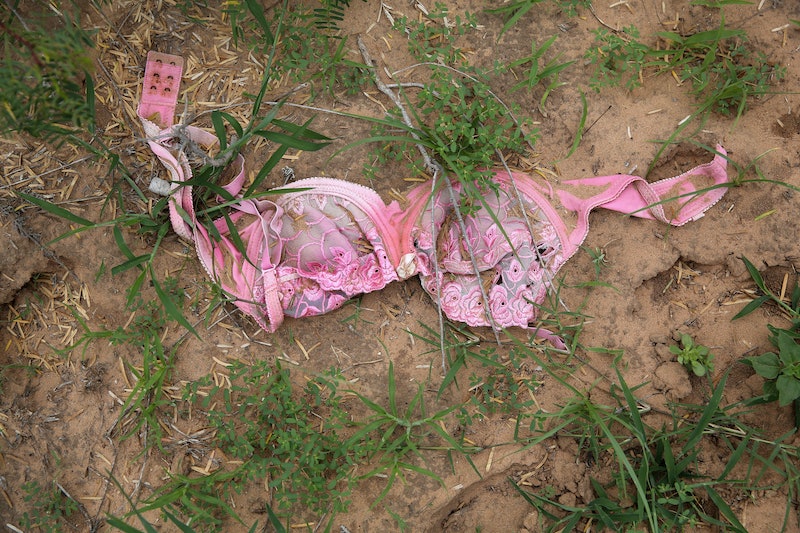 The results of a 15-year French study are in: Wearing bras may actually make your breasts sag more. This has opened a whole can of internet worms: Jezebel accused the French scientist of being a pervert, men rejoiced, and people all over the world suddenly had a lot to say about nipples. The idea of a million braless women strutting their stuff on the street, especially during a cold front, is enough to garner major attention from everyone: the pervs and the prudes and the feminists and the voyeurs. But why isn't anyone concentrating on the most important question: What's best for your breasts' actual health?

The study focused on perkiness, which is an understandable concern in a world obsessed with aging, but let's be honest: It's pure aesthetics. The backlash has taken the form of new dialogues about the male gaze, but that's all sociology. As someone who would really prefer to live a long, healthy life without being sabotaged by my mammary glands, I have to ask: Where are the people studying the effect of bralessness on breast tissue, lymph nodes, and general breast health? There are plenty of crazy-looking websites claiming things like "lymphatic flow carries toxins out of your breasts," but I'm hard-pressed to find a legitimate study to either verify or disprove these claims.

Here's my non-scientific experiment with bra-burning: The summer heat and humidity has been killing me, and my breasts have been sore since May. Of course, hypochondriac that I am, I was sure I'd developed some sort of terrifying breast disease that was now coursing through my body like Greeks through the Trojan horse. I read about the French study, thought “Huh—it is summer,” and threw my brassieres to the wind. One braless walk to the grocery store and the soreness was completely gone. In addition, I hadn't started any riots (my secrets: flowy tops, layering tanks, lightweight scarves). Lymphatic flow, anyone?

So, like the forward-thinking writer I am, with a background in high school biology and a semester of Intro to Neuroscience, I took to the streets to interview society's finest (aka my friends) about bras and bralessness. I present you with the following non-scientific anecdotes, and encourage you to conduct your own experimentation.

My friends responded in a number of ways. Many mentioned breast size as a major factor in the bra/less decision, whether large...

Since my boobs are MASSIVE, my boobs hurt more when I'm braless for a significant period of time. I do believe that giving boobs freedom every once and a while is beneficial though. Sometimes, bras are just SO UNCOMFORTABLE. Considering my penchant for wearing nightgowns around the house and my penchant for constant showering, I spend a fair amount of time braless, just never in public (the population would NEVER recover). It's very freeing and nice as long as there is not too much movement involved.

I just don't feel like it really matters. My breasts are too tiny to be affected by it.

I always take off my bra when I put on my pajamas at night (aka 4 PM), and as long as I don't move around too much, they feel much nicer than in a bra.

I do not wear a bra to bed! So much more comfortable without them, even the bras billed as "comfy." If I am coming home from a long day of work and getting changed, they are almost always one of the first things to go...similar to shedding one's entire uniform after school, and feeling super liberated. Or like taking off pants after a long day, and being like, "Yesss."

As for sleeping in a bra, I did it for a very long time. I was told that if you sleep in a bra, your boobs won't sag with age. When I first decided to go braless at night, I thought I felt uncomfortable. Now, being braless at night is one of the highlights of my day. But if I have to leave my bedroom, I put on a sweater in fear of my housemates seeing my nipples.

But for many of my friends (and the female population in general, I'd venture to guess), it's impossible to separate the idea of bralessness from the idea of overwhelming public reaction:

The day I realized I forgot to wear a bra to school in high school: I put all the other pieces of my uniform on in such a hurry to make the bus that I forgot my bra. I have also forgotten my socks like this in the past. Despite (thankfully) having both a sweater and a blouse, I felt pretty naked, and everyone could totally tell, although who knows if anyone really could without looking (probably not).

This summer I embraced the bandeaux bra and its lacy sisters. Despite my desire to be a full-blown, yoga-teaching, hipster-loving, non-hippie, I have bigger boobs than my colleagues and worry that when totally braless, my nipples might draw too much of a male gaze from the world around me. But the bandeaux and those lacy things Free People makes provide absolutely no support, but enough of a layer to avoid this nipple situation. Furthermore, they are often in awesome colors which show underneath my sheer, cropped shirts. Just the kind of male gaze I seek from the world.

And you know what? I think that's a completely valid way to feel. If you feel uncomfortable with the (somewhat shocking) braless look, don't force yourself to rock it under the guise of arbitrary "liberation" or whatever:

I thought about this quite a bit and realized I was too scared to go braless. I'm scared of my nipples being seen through my shirts. Is that a thing? Does team anti-bra have a solution for nipples, or is that part of the liberation? Am I also supposed to not care if the world sees them?

And yeah, it's hard to separate bras from their sexual connotations:

I do feel sexier in them though. I also like to think that they leave something to the imagination. I feel especially sexy in lace ones and especially fake in very padded ones.

But mostly, it's an incredible way to get back in touch with your physicality:

Having embraced this new look and feeling [wearing bandeaux], I realized, anew, how stunning my breasts are. I catch myself walking around my apartment just in this garment somewhere between bra and nudity. And in writing these anecdotes down, it's also apparent to me that no amount of feminism in the decision to wear a bra or not can turn the men and women around me into feminists. Our eyes are whores. And breasts are beautiful in all their possible states.

As I read their responses, it became clear that no matter how much I want the question to be about health (what feels best? What's best for the body?), it never will be. It is about physical comfort versus social discomfort. It is about attracting others and nurturing yourself. And no matter how many institutions comment on the bra, they will always be intimately linked to a woman's body — your own. So until someone studies bra-wearing in a more seriously scientific capacity, it's just us and the girls.

More like this
Instagram & Facebook May Finally Lift Their Notorious Nudity Ban
By Allie Fasanella
11 Surprising Ways Thongs Can Affect Your Health
By Carolyn Steber
Phoebe Dynevor Serves ‘Bridgerton’ Underboob In Stunning Floral Gown
By El Hunt
24 History-Making Black Women You Probably Didn't Learn About In School
By Ayana Lage and JR Thorpe
Get Even More From Bustle — Sign Up For The Newsletter
From hair trends to relationship advice, our daily newsletter has everything you need to sound like a person who’s on TikTok, even if you aren’t.