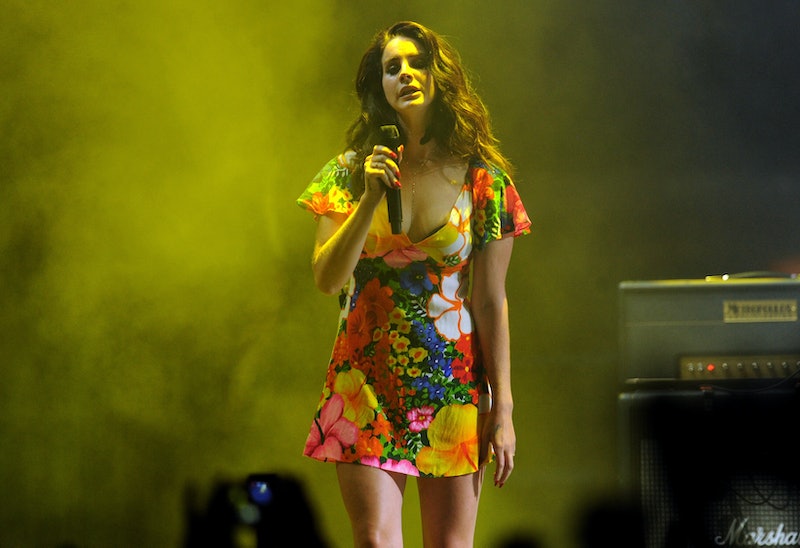 From Lady Gaga's shocking on-stage vomit stunt (sponsored by Dorito's!) to Kanye West and Jay Z reclaiming their Throne, the big-name music acts at the 2014 SXSW Festival nabbed plenty of headlines. Of course, that wasn't necessarily for the best reasons. Has the Austin festival, now in its 27th year gotten too big for its britches and strayed from the indie mentality that made it so great in the first place? Now, it's not to say that the lineup for 2014's Austin City Limits festival isn't also jam-packed with music superstars — Eminem, Pearl Jam, Lorde, Beck, Calvin Harris, and Lana Del Rey (pictured) are just a sampling of this year's notable names — but it does prove that ACL, which started back in 1976 and has become an intricate part of music history, is just as much a force to be reckoned with in Austin. If not more so.

Now, for every obvious name on the lineup (including OutKast, who are ev-er-y-where this year) or one that evokes a feeling of "What...Why?!" (that means you, Skrillex) on the two weekend-spanning festival, there's even more that will take music fans by surprise, in a good way.

The 2014 ACL lineup has over 100 acts performing, from established bands with built-in fan bases (like the Avett Brothers, Belle & Sebastian, AFI, Childish Gambino, Interpol, Spoon, and The Replacements, who will hopefully put on a better show than the one they did at Coachella) to awesome festival standards (including Trombone Shorty & Orleans Avenue, St. Vincent, The Head & the Heart) to exciting breakouts (Capital Cities, CHVRCHES, Real Estate, among others) to a bevy of bands and artists to discover.

Tickets have officially gone on sale for the event and you can check out the entire, genre-spanning line-up here. SXSW and Coachella may be the seen to be scene, but the game-changing ACL may be the one to really keep an eye out for this year.

More like this
Austin Butler Confirms Vanessa Hudgens Pushed Him To Do 'Elvis'
By Alyssa Lapid
Vanessa Hudgens Shades Austin Butler's Elvis Accent With One Word
By Alyssa Lapid
12 Years Ago, Austin Butler Manifested His Oscar Nom In This Disney Movie Scene
By Jake Viswanath
Cruz Beckham Teased New Music With An Adorable Nod To Mom Victoria Beckham
By Stephanie Topacio Long
Get Even More From Bustle — Sign Up For The Newsletter
From hair trends to relationship advice, our daily newsletter has everything you need to sound like a person who’s on TikTok, even if you aren’t.