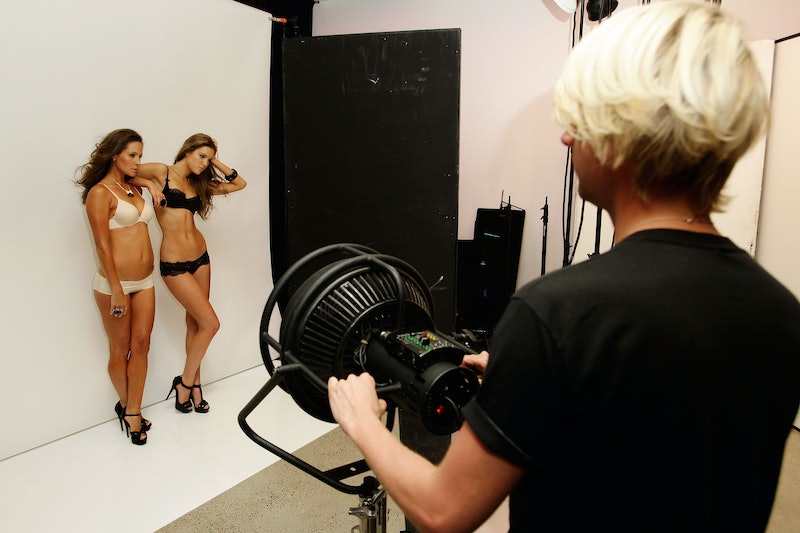 Every morning while making my bed, I catch my reflection in the mirror across my apartment and lift my shirt to assess my midsection. Turning to the side, sometimes I think, “Not bad.” But more often than not, my eyes linger on the slight bulge of my tummy. Remembering a kettle chip incident or skipped workout from the day before, I vow to be more vigilant.

My routine went largely unchecked until a few weeks ago, when I scrolled through Facebook and clicked on a nutrition headline. But instead of digesting the usual fare of surprising tips, I had a visceral reaction to the grotesque bouquet of body parts selected for the story: Torso behind hands holding a salad. Legs crossed over a couch. Row of rumps in cut-offs. Two torsos tanning on pool chaises. Lips lacquered like a cherry red pick-up truck. Torso flanked by a spandex bra and shorts.

"It’s almost like killing the breathing woman. Now she is truly just an object and we don’t have to think about the living animal that a human being is."

Feeling overwhelmed, I went to the bathroom to brush my teeth. As I imagined that Dexter himself had created that page, I caught myself in front of the medicine cabinet, unwittingly lifting my sweatshirt to check out — you guessed it — my torso.

"I remember vividly when I was a child, there was an ad for pantyhose that had a terrifying pinwheel of dismembered women’s legs, and something about that disturbed me," Tomi-Ann Roberts, Ph.D, a psychology professor at Colorado College, tells Bustle. "When images only show sexualized parts of bodies — breasts, hips and waists — and remove the head from those parts, we’re indicating that those sexualized parts represent femininity."

Dismemberment is a gruesome brand of objectification, and it preserves the idea that women are just the sum of their body parts. Of course, this isn't a new thing — women have been objectified on canvas for centuries. (In the early 1860s, Manet’s Olympia and The Luncheon on the Grass were the first female nudes to create a fracas merely because his naked subjects dared to bare their faces; squarely meeting the male gaze.)

But these days, "Do it better" life hacks tend to still be stealthily served up with images of hacked-up ladies.

"But when you [read] ‘increase your heart health’ and the image connected to it is a woman, in good shape from her mouth to her boobs, it’s a trick. Maybe you’re internalizing the healthy message, but you’re also associating ‘healthy’ with this cropped image."

It turns out that isolating my stomach when I look at myself in the mirror isn't all that uncommon. In fact, provocative research published in European Journal of Social Psychology in 2012 found that this problem is so engrained that our brains tend to process women as a collection of parts.

In the study, participants reviewed images of average Joes and Janes from head to knee. After a pause, they viewed two side-by-side images, one of which was slightly modified in the bust or waist, and selected which one they had just seen. In a second experiment, the side-by-side images zeroed in on the torsos.

“Local processing underlies the way we think about objects: houses, cars and so on. But global processing should prevent us from that when it comes to people,” says Sarah Gervais, Ph.D. lead author and social psychologist at the University of Nebraska-Lincoln, in the study. “We don’t break people down to their parts, except when it comes to women, which is really striking. Women were perceived in the same ways that objects are viewed."

Gervais' study offered a way that we might begin to solve this problem: It was easier for people to process women holistically when they were asked to first identify a large letter formed by tiny alphabet-soup-style letters. In other words, by teaching men and women to conceive of women's body parts as the components of a larger and whole identity, we may be able to reprogram this kind of objectifying thinking.

But why this tendency to segment women’s bodies in the first place? Researchers have suggested everything from evolutionary mating habits to the way modern media portray women. (I'd vote it has more to do with the latter.)

Both Roberts and Tibbals point to the dark underbelly of our culture’s "death-defying" obsession with youth as a piece of the puzzle. From lip gloss to expert opinion, everything we’re being sold aims to make us look and feel younger; an illusion that we are delaying the inevitable decay.

"My work has shown that women’s bodies remind us of death more than men’s bodies because we bleed, we lactate, and we share functions with other non-human mammals. But we distance ourselves from their functions — for example, we have to hide menstruation. It’s these parts that we objectify, sexualize, and focus on when we do that dismembering because they remind us of our animal nature, and therefore our mortality," Roberts says.

"It’s almost like killing the breathing woman. Now she is truly just an object and we don’t have to think about the living animal that a human being is."

"That Swimsuit Becomes You"

I was an early bloomer, which meant my bust and self-consciousness blossomed in the fourth grade. I was in a pool the first time I remember being ogled. Two boys from class spied on me diving in when the impact yanked down the top of my pink swimsuit.

Maybe this wince-worthy memory is the reason “That Swimsuit Becomes You,” a landmark study co-authored by Roberts and published in Journal of Personality and Social Psychology, struck me. Roberts and fellow researchers asked both women and men to take math tests while sporting either a sweater or a swimsuit. Most people wearing swimsuits experienced self-objectification — but only swimsuit-clad women’s exam scores took a significant hit.

When women and girls are targets of objectification, they begin seeing themselves through others’ perceptions. Self-objectification breeds shame and anxiety, draining mental resources, and even compromising physical abilities.

Take the "Perfect Woman” magazine feature that simply won’t die. Readers are presented with a bin of celebrity body parts and asked to assemble what they consider to be an ideal form. Publishers then regurgitate results in viral image.

Earlier this month, a lingerie brand released a PR-bait survey that compared the ideal shape of women and men, as constructed by women and men. Spoiler: They amount to different shapes! The brand concluded that "The sum of all these parts does not match perceived physical perfection. It should give us all more body confidence!"

This is supposed to help us how?

Sometimes, getting mad works, like the time Men’s Health tried to ride the "Perfect Woman" train in 2012 with a story called “Anatomy of a Perfect Woman.” Its science-says-so angle rounded up "stats" of what men find desirable in women (down to our shoe size), along with a terrifying collage that looked like the SyFy adaptation of a Lever 2000 commercial. The magazine caught so much flack in the blogosphere for the piece that the link is no longer live.

Awareness and anger get us talking, sharing, and calling out offenders. Maybe you can create a Pinterest board to call out publishers' objectifying images. I myself have started taking screenshots of sliced up body parts and compiling the debris into one, whole image. The resulting collage betrays the power of its pieces. Even as a woman who now recognizes — and rejects — this trick, somehow, I still can't do anything but look at the pieces. That makes me mad. But perhaps that's actually a good start.

As for my gut-checks, I'd be lying if I said it wasn't a difficult habit to crack. But at least now, I'm catching myself more often. And when I do, I don't look away: I refocus my eyes and train them on my entire reflection.