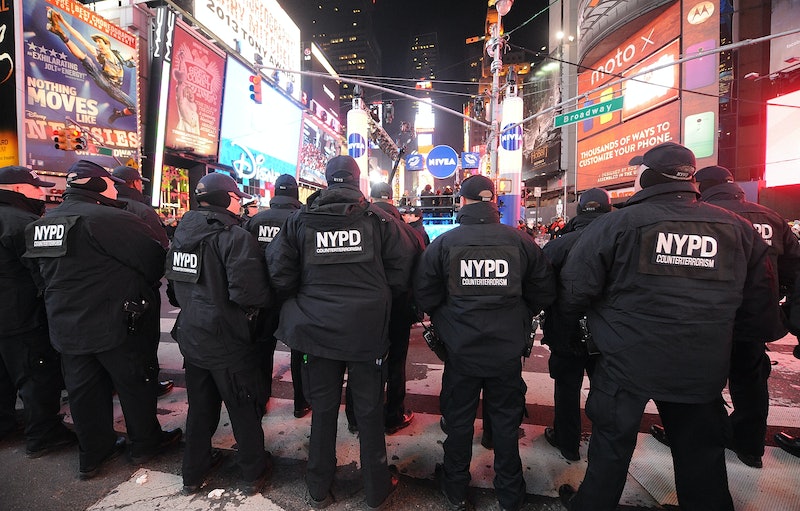 Oh dear. You can see where this one is going. Everyone can see where this one is going, aside from the New York Police Department. In an attempt to engage with citizens of New York, the NYPD sent out a tweet Tuesday asking Twitter users to post photos with NYPD officers and hashtag them #myNYPD. It even said there was a chance the photos could be featured on the NYPD's Facebook page.

Well, they certainly got an enthusiastic response. The hashtag was well and truly hijacked, with users posting photos allegedly showing pretty horrific police brutality and misconduct. First to get in on the act was, predictably, Occupy Wall Street, who posted as many pictures as it could possibly find.

Then everyone joined in. The infamous photo of that 84-year-old man who was left with a bloody face for jaywalking? Yep, he popped up. As did many examples of stop and frisk.

By the end of the day #myNYPD had trended to number two spot in America. So we guess that's a mightily successful Twitter campaign, if you don't count the fact that the majority of the photos depict violent altercations.

All the same, the NYPD was determined to put a positive spin on the debacle.

"The NYPD is creating new ways to communicate effectively with the community," Deputy Chief Kim Royster said in a statement. "Twitter provides an open forum for an uncensored exchange and this is an open dialogue good for our city."

The NYPD has made a big push in recent weeks to engage New Yorkers via social media. Five commanders across the city were given the go-ahead to write their own Twitter messages, and started doing so last week.

Police Commissioner William Bratton has also beefed-up his Twitter presence in recent months, although the majority of his messages are written by an officer in the communications department.

Although the #myNYPD campaign did generate a few of those warm and fuzzy photos the department was looking for, this #epicfail shows they really do have a lot to learn.

More like this
17 Powerful Photos From March For Our Lives Protests Across The U.S.
By Michelle Toglia
Zendaya Shut Down Those Viral Pregnancy Rumours
By El Hunt
What Is A “Softboy?” The TikTok Term & Aesthetic, Explained
By Courtney Young
Why Are TikTokers Slapping Each Other With Tortillas?
By Courtney Young
Get Even More From Bustle — Sign Up For The Newsletter