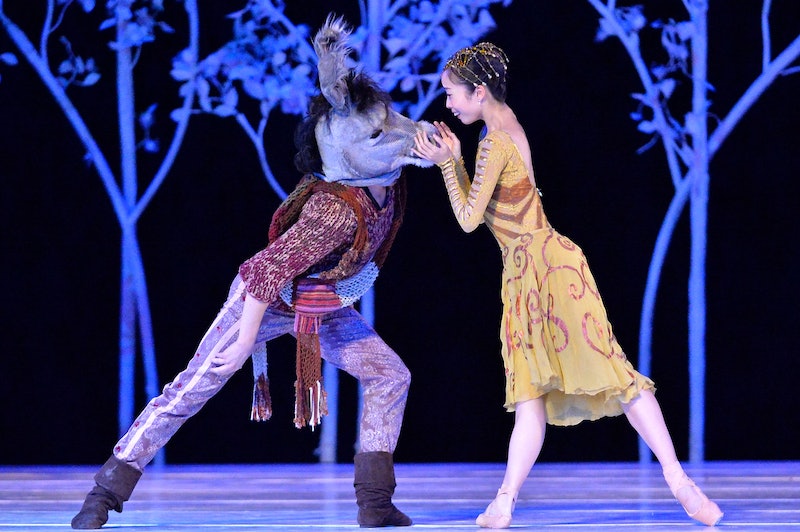 Ain't no flirtation like a Shakespearean flirtation. Whether the infamous playwright was tantalizing his audience with impossibly complicated love triangles, passionate but star-crossed lovers, or girls wearing — wait for it — pants, no one was better at the subtleties of flirtatious banter and heavy innuendo than the Bard of Avon. He was the reigning lord of sharp, scandalous repartee and a master of every euphemism on the planet (in fact, he probably invented a few); he knew just when to have his lovers fight and exactly how to let them make up. If your only introduction to Shakespearean love is a little film known as Shakespeare in Love, I guarantee you're missing out.

The metaphor-filled banter that marks Romeo and Juliet's first kiss is probably the smoothest young-love dialogue ever. They may be crazy in love, but they haven't lost their tongues yet; the duo manages to turn an elaborate discussions of pilgrims, saints, and prayer into an excuse to kiss twice, followed by Juliet's adorable sorta-non sequitur: "You kiss by the book."

Oberon and Titania of A Midsummer Night's Dream are the ultimate dysfunctional power couple. They're the Fairy King and Queen, for goodness sake; they run that forest. Throughout the play, they're furious at each other because Titania refuses to give Oberon one of her servants, a "little changeling boy." In fact, they've been quarreling so intensely that they've actually disrupted the seasons. It's all fairly harmless and a little bit sexy (well, until Oberon tricks Titania into cuddling with a donkey), especially when they make up in rhyming couplets.

3. The entirety of The Taming of the Shrew.

Petruchio: Come, come, you wasp; i' faith, you are too angry.Katherine: If I be waspish, best beware my sting.Petruchio: My remedy is then, to pluck it out.Katherine: Ay, if the fool could find where it lies.Petruchio: Who knows not where a wasp does wear his sting? In his tail.Katherine: In his tongue.Petruchio: Whose tongue?Katherine: Yours, if you talk of tails: and so farewell.Petruchio: What, with my tongue in your tail? Nay, come again, Good Kate; I am a gentleman.

The witty, lighting-fast banter between proud Kate and wife-hungry Petruchio is the stuff that legends are made of, if you can handle the play's misogynist undertones. Though the fiercely intelligent Kate often goes after Petruchio's intellect, Petruchio fights and flirts dirty, and deserves about 10 times the slaps-across-the-face he receives in any given production.

4. The terrifying yet extremely effective proposal in Richard III.

Gloucester: Why dost thou spit at me?

Lady Anne: Would it were mortal poison, for thy sake!

Gloucester: Never came poison from so sweet a place.

Out of my sight! thou dost infect my eyes.

Nothing like seducing a woman over her dead husband's coffin, know what I mean? The hideous but manipulative Richard, Duke of Gloucester, is one of the most persuasive people on the planet — so persuasive, in fact, that he convinces Lady Anne, whose husband he has recently murdered, to marry him. Well, technically, he convinces her to accept his ring and meet him at a later place for more romantic rendezvousing, while she insists that accepting a ring isn't the same as agreeing to get married. WHATEVER HELPS YOU SLEEP AT NIGHT, LADY ANNE. The flirtation here is pretty one-sided for most of the scene — until Lady Anne decides that her husband's murderer isn't so bad after all — but it sure is effective.

5. Literally everything Beatrice and Benedick say but especially the moment they finally admit they love each other.

If you adore clever repartee between arch-nemeses who clearly have it bad for each other, then you'll love Beatrice and Benedick in Much Ado About Nothing. These two were made for each other — especially since no one else in the entire play is half as smart as they are — but they're both too stubborn to admit it. And nobody, nobody plays Beatrice and Benedick better than Emma Thompson and Kenneth Branagh (who were married to each other in real life!). Watch and learn: this is Shakespeare in love at its best.

So, um, this guy named Orlando is in love with this girl named Rosalind, but Rosalind has to start dressing like a boy in order to avoid being killed by her furious uncle. While wearing pants, Rosalind comes across Orlando writing love-sick poetry to "Rosalind," and convinces him that in order to get over his hopeless crush, he should pretend that she (disguised as a "he," remember?) is Rosalind. He'll tell fake-Rosalind how much he adores her, and fake-Rosalind-who-is-actually-real-Rosalind will, in turn, pretend to be an extremely annoying version of real-Rosalind until Orlando gets over his crush. You follow? Basically, Rosalind gets to have her cake and eat it too — she gets to act out a romantic relationship with Orlando while hearing him rhapsodize about how much he loves her as though she's not actually there. (Just to complicate things, the photo above is a screenshot of Orlando falling in love with Rosalind at first sight despite the fact that she's wearing a pointy princess hat.)

Hamlet: Lady, shall I lie in your lap?

Ophelia: No, my lord.

Hamlet: I mean, my head upon your lap?

Hamlet: Do you think I meant country matters?

Ophelia: I think nothing, my lord.

Hamlet: That's a fair thought to lie between maids' legs.

Ophelia: What is, my lord?

Hamlet and Ophelia have one of those relationships that you really want to work, because they both clearly have feelings for each other, but you know it's never going to happen: one of them is a self-obsessed lunatic and the other one has an incredibly domineering father. But — but — maybe everything could work out? If they would just run away from the toxic castle atmosphere and be consistently nice to each other? Unfortunately, Shakespeares tragedies don't work that way; one of them keeps on being crazy and the other one goes and gets herself drowned. In this scene, the innuendo that Hamlet slings at Ophelia is horribly inappropriate, especially because the word "nothing" is slang for something, but they're both so troubled and lonely that the interaction ends up being a little bit poignant and sad.

8. Viola, pretending to be Cesario, flirting with Olivia on behalf of Orsino; or, The Most Complicated Love Triangle of All Time.

Olivia: Why, what would you?

Viola: Make me a willow cabin at your gate

And call upon my soul within the house.

And sing them loud even in the dead of night.

Halloo your name to the reverberate hills

And make the babbling gossip of the air

Cry out “Olivia!” Oh, you should not rest

Between the elements of air and earth,

But you should pity me.

Like much of Shakespeare, the plot of Twelfth Night involves cross-dressing and love triangles that result in massive misunderstandings and lots of hilarious hijinx. The lovely Olivia falls hard for Viola, who's working for a man named Orsino. Orsino is in love with Olivia, and sends Viola — dressed as a dude named Cesario — to woe Olivia in his stead. His plan backfires, because this "Cesario" knows exactly what a woman like Olivia wants to hear, and Olivia falls in love with Cesario instead. Alas, poor Olivia! Cesario isn't into girls ("he" actually has a crush on his boss, Orsino) — but thankfully, Cesario's got a handsome twin brother who definitely likes the ladies.

9. Henry V trying to convince Catherine to marry him.

In the play Henry V, the English king conquers France without much trouble, but finds it much harder to win the heart of Catherine, the beautiful French princess. This scene, in which he tries to convince her to marry him, is incredibly tender and full of adorable language barrier issues. At one point, Henry gets really awkward and wishes out loud that winning a woman's affection was as easy as battle (his exact words: "If I could win a lady at leap-frog, or by vaulting into my saddle with my armor on my back … I should quickly leap into a wife"). Finally, he wins her over by attempting to speak French, and it's precious. (She laughs at him — and then says yes.)