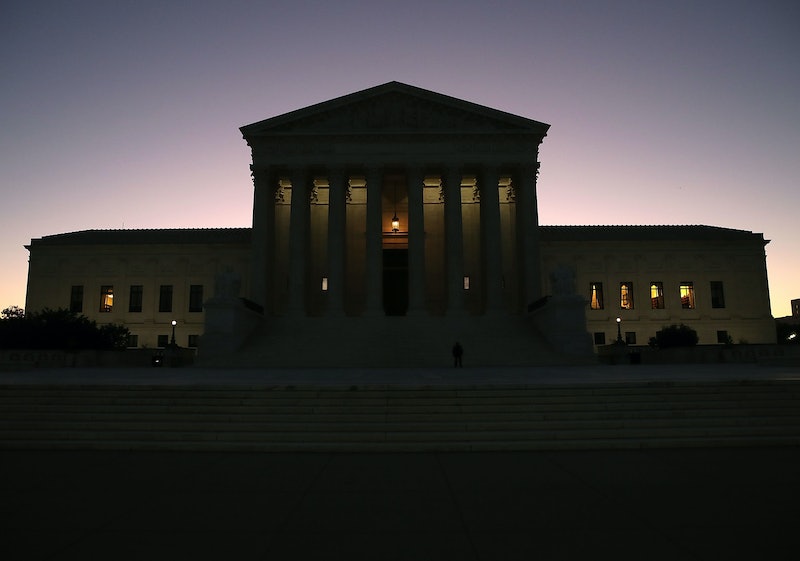 The SCOTUS has had an incredibly busy few days. On Wednesday, the Supreme Court voted in a 5-4 decision to uphold part of the Violence Against Women Act (VAWA) that allow victims of child pornography to seek damages from anyone caught peddling illegal images of them. This marked a partial victory for VAWA, which won a hard-fought battle for reauthorization in 2013 after conservatives opposed it. Although the justices agreed that victims of child pornography deserve restitution, the amount will be determined in each individual case by federal judges familiar with the case.

The case, Paroline vs. United States, emerged after a young woman, called "Amy" in the case, realized that photos of her childhood sexual abuse had been circulated on the internet. Her uncle, the abuser, paid $6,000 in damages, but Amy went on to seek restitution from all others who plead guilty to child pornography charges who were in possession of her photos.

Doyle Paroline, a Texan, took the issue to court, where a judge ruled that there was no evidence of Paroline's contribution to Amy's abuse. When Amy appealed the case in New Orleans, the judge took her side, and ordered Paroline to pay the full $3.4 million Amy demanded. The SCOTUS has now once again reversed this ruling, and while Paroline will have to pay some restitution, it will have to be a "reasonable amount in line with his role in the crime."

Of course, this begs the question: How does one determine Paroline's role in the crime, and more importantly, how does one determine a "reasonable amount" for possession of child pornography? Justice Kennedy, who authored the 26-page decision, determined that a "common sense approach" was necessary in devising payment, saying "Restitution is therefore proper ... only to the extent the defendant's offense proximately caused a victim's losses."

Chief Justice John Roberts, along with Justices Antonin Scalia and Clarence Thomas, arguably the most conservative trio of the bunch, dissented with the opinion, arguing that Paroline should not have been required to pay anything because determining his role in the crime would be impossible. Moreover, the justices argued that the written law eliminated the possibility of rightfully finding an appropriate amount. Of course, in keeping with her disagreements with Justice Roberts, Justice Sotomayor argued that such logic "would result in no restitution in cases like this for the perverse reason that a child has been victimized by too many."

But in 2002, the decision in Ashcroft v. Free Speech Coalition determined that the Child Pornography Prevention Act of 1996 abridged freedom of speech, claiming that the vagueness of the act could result in the banning of Romeo and Juliet . Seriously, Romeo and Juliet plays a significant part in the ruling, and it's used to defend an act that prevents child pornography.

The latest decision certainly finds a middle ground in terms of dealing with child pornography and its emotional and mental effects on its victims. While all the judges agreed that Amy deserved some payment, they could not reach a consensus on how to go about determining the amount.

Amy is by no means the first individual to seek restitution for child pornography, but her case is the first to reach the highest court in the land. The precedent set by the decision seems to be a dangerous one, as allowing different judges to use individual discretion to determine both a child pornographer's role in the crime and the amount to be paid is a hairy proposition, at best.

While Amy's victory is a small one, it still moves chains in the right direction.