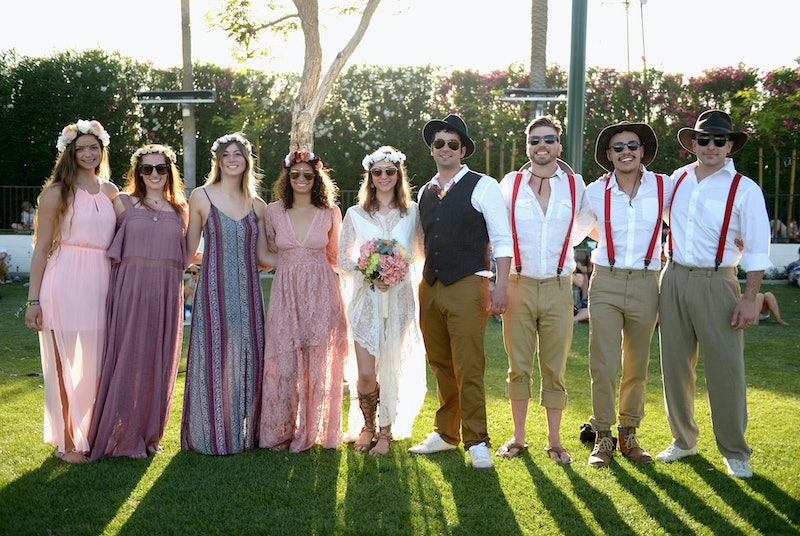 A new American Express study says that the average cost of attending a wedding is $592, up 75 percent from two years ago. Little did the people at American Express know that they were wasting their time in conducting said study, since I already did the comprehensive research myself! Since my friends started getting married about five years ago, I've been invited to, after a cursory count, approximately 30 weddings. THIRTY. Had I attended all of them (sorry, friends who got married in Park City and Napa Valley. Couldn't swing it!), that would have set me back about $17,760. Let's just say that the years 2009-2014 have been rather lean in the Alvin household.

So where is all this cash going? That number takes into account money that guests are spending on pre-wedding parties, hotels, transportation, clothing, accessories, and personal grooming. Because who out there hasn't gotten a pre-wedding bikini wax in anticipation of hooking up with the least awkward groomsman? (Me. I haven't.) What's more, this figure doesn't even include gifts ($109 on average per wedding) or the additional $26 you'll spend if you're in the wedding party (a suspiciously low number given how much I recall spending on bridesmaid dresses, which I did not mind doing, but just sayin'), which ups my grand total by another $3,400. Perhaps I will recoup these costs when I get around to hosting my own nuptials, should I decide not to get hitched at City Hall when the time comes? (OK, Mom, stop crying, I won't get married at City Hall, I promise. But the Catholic church is out. Mom, stop, it'll be OK.)

But lest you feel like you're getting ripped off as a wedding attendee, please note that today's brides and grooms are shelling out the cash in kind. According to a survey by The Knot of 13,000 brides and grooms, the average couple spent $29,858 on their wedding in 2013 (a figure significantly boosted by places like Manhattan, where the average cost is $87,000, yowza), up 5 percent from last year. They spent about $220 per guest on food and entertainment, though no word on what the tally was for venue, paper goods, alcohol, ice luges, carnival games, Elvis impersonators, etc.

So it looks like both the brides and grooms and the guests are participating in this marriage industrial complex, where the amount that newlyweds are expected to spend on the event (and the ring!) and the amount that guests are expected to spend on attendance and gifts continues to grow until we're all broke and the caterers, florists, hoteliers, and good people of Williams & Sonoma are fat and happy. So, about that City Hall idea...

More like this
These 4 Zodiac Signs Make The Best Bridesmaids
By Nina Kahn
'Bachelorette' Vet Clare Crawley Unveiled 2 Special Wedding Day Accessories
By Stephanie Topacio Long
'RHOP' Stars Robyn & Juan Reportedly Got Remarried & Filmed The Ceremony
By Brad Witter
The 3 Zodiac Signs Most Likely To Get Married Later In Life
By Kristine Fellizar
Get Even More From Bustle — Sign Up For The Newsletter
From hair trends to relationship advice, our daily newsletter has everything you need to sound like a person who’s on TikTok, even if you aren’t.