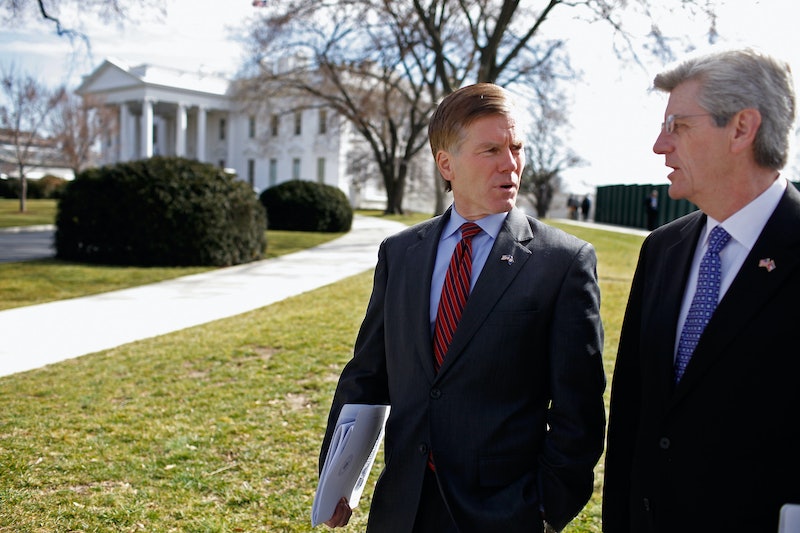 Oh Mississippi, when will you stop being just the most atrocious place for women's rights? On Wednesday, Mississippi Gov. Phil Bryant signed a bill banning abortions in Mississippi after 20 weeks, without exceptions for rape or incest. To make things worse, since the ban counts from the woman's last menstrual period, instead of fertilization, it's actually not even a ban at 20 weeks — in effect, it's actually an 18-week ban, instead. Still, maybe we should expect as much from a state whose sex ed classes teach kids that gay sex is illegal.

The state will be joining the likes of Alabama, Louisiana, and Texas, which also have 20-week abortion bans, but House Bill 1400 (which will go into effect July 1) is unique in making abortion illegal starting at 20 weeks' gestational age, meaning 20 weeks since the beginning of the woman's last period. Which boils down to the fact that for women in Mississippi, abortion will be unavailable to them after only 18 weeks. And there are no exceptions for rape or incest.

“Two years ago, politicians in Mississippi tried to use an underhanded law to close the only abortion clinic in the state, which is now hanging on by a federal court order,” said the president and CEO of the Center for Reproductive Rights in a statement. “Now, these very same politicians have set their sights on shutting down exceptionally rare instances of abortion care after 20 weeks, of which there were only two in 2012.”

The only exceptions HB1400 allows? If the woman is at risk of "death or substantial and irreversible physical impairment of a major bodily function," or the fetus has "severe fetal abnormalities." As Democratic State Sen. Deborah Dawkins pointed out, the bill is so completely off-base it's almost absurd. “It occurs to me the past few years that a lot of men do not understand how the female body works,” she said, according to the Ledger. “This is about removing the rights of women without means, whether anybody here is willing to admit it or not.”

The poorest state in the country has lately been killin' it when it comes to general human rights. Only three weeks ago, Mississippi passed an ominously obtuse anti-gay discrimination bill, one very similar to the legislation that was vetoed by Arizona Gov. Jan Brewer after protests erupted across the nation. As Bustle previously reported, "the bill’s cryptic text is completely intentional, so that a court can’t question the constitutionality of the wording itself. That also opens up the possibility of discrimination against basically anyone, including divorced people." Way to go, Mississippi.