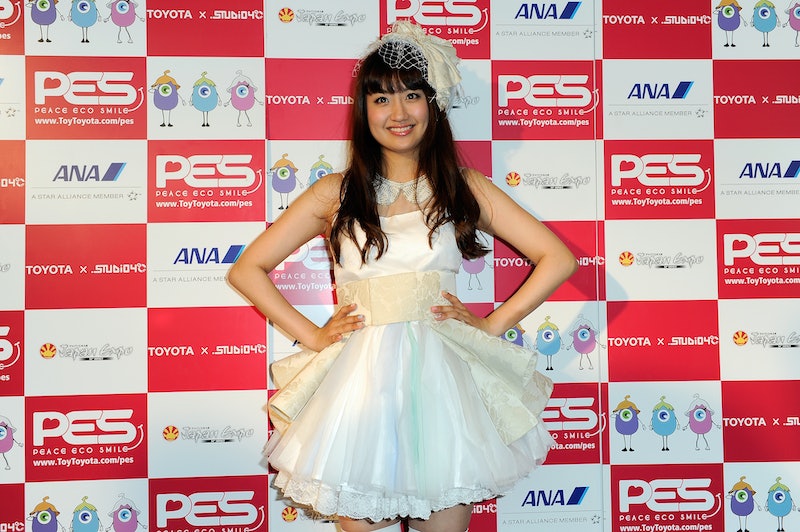 While filling my day's quota of heavy intellectual reading, I stumbled across a Fashion Police article titled "Fashion Face-Off: Chrissy Teigen vs. Kate Upton in Itty-Bitty Baby Doll Dresses." (It was filed under "News," if you must know). My first reaction was similarly highbrow: ugh.

There's something distasteful about the 2014 iteration of the baby doll dress. Sure, it can be a '90s throwback, especially if you're going full-on Kinderwhore (a controversial style that's dripping with cool, if not classiness). But when the baby doll dress hits the red carpet, or even just the party circuit, in all its cutesy come-hither-ness, I find the look very dated and, to be quite frank, a little bit creepy. The history of baby doll dresses is probably banned in Kentucky; it's über-sexual and dripping with little-girl themes. Basically, I'm ready to see the whole style thrown out of the public eye, at least for a couple of decades.

Typical baby doll dresses are very short, empire-waisted, and designed, in some cases, to show what momma gave you when you bend over. Why? Because that's what dresses worn by dolls do, revealing their plastic thighs and tiny, frilly underwear. (If you do a Google image search of "baby doll," you'll be hit with a disturbing combination of super-sexy negligees and, well, baby dolls.) The style started out as lingerie, but became a popular choice of daytime clothing at some point; probably after the 1956 movie Baby Doll came out. This film was written by Tennessee Williams, and IMDB sums it up as a "steamy tale of two Southern rivals and a sensuous 19-year-old virgin." The protagonist, 19-year-old Baby Doll, is waiting till her 20th birthday to consummate her marriage to her older husband (though she's not looking forward to the prospect). While the date looms nearer, she teases him and his friends with her "overt 'baby doll' sexuality," by sleeping in a nursery, inside a crib, wearing — you guessed it — baby doll lingerie.

Soon enough, this "baby doll" style was something you could easily wear out of the bedroom, too, because everyone wanted to be a little bit more like Baby Doll.

What makes baby doll dresses unique isn't necessarily the fact that they're super-short; they're very different from short Mod frocks, for example, which also show a ton of leg but have a straighter silhouette. No, from the beginning, baby doll dress have emphasized both the baby and the doll aspect: a very young sexuality doubled with a sort of perky plaything attitude. Needless to say, baby doll lingerie is super popular; especially in the bridal department. They're a highly eroticized piece of clothing, and that's fine. You do you, Baby Doll. I'm just tired of seeing them on the red carpet.

It's a dated, prom-ish look and it's both unflattering and too — well, too baby doll. I have to agree with the Fashion Police on this one: when stars wear this shape, it's not a question of "who wore it better," it's a question of who looks less like a little girl. And that's just not a discussion I want to be having right now.

(Especially when they insist on holding this pose.)

Wear whatever you want, obviously, and I generally don't like arguments that say women should wear X and not X when they get older. (I don't want people telling me what I can't wear when I'm 70 — though I would appreciate a little helpful guidance if I'm completely bonkers by then.) There will come a day, I'm sure, when the "itty-bitty" (ew) empire waist silhouette will look fresh again, because fashion is nothing if not a flat circle. But right now, the baby doll dress is steeped in such Lolita-worthy history that I'm ready to forget it exists for a few years. Let's stick to grown-up pastels and cool metallics and leave this shape for actual little girls.