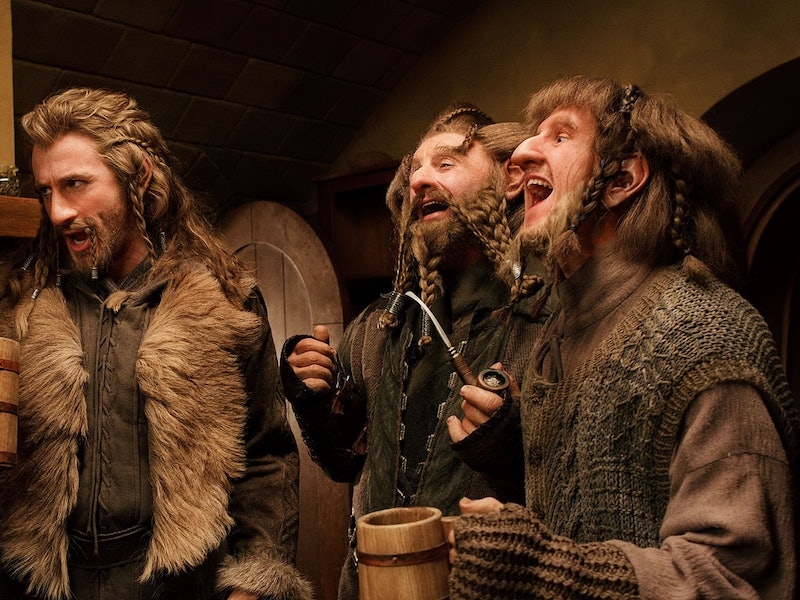 In case you want your daily dose of Hobbit news, the third Hobbit movie got a new title because the first title just... didn't sound super catchy. The original title for the third movie of this Lord of The Rings spinoff, slash Peter Jackson wallet-stuffer, was called The Hobbit: There And Back Again. That may or may not have confused those unfamiliar with the franchise, as it sounds sort of like alien movie in set the LOTR universe, and apparently, people behind the movie just didn't think that it captured the essence of the film. Because you know, epic franchises are all about capturing the essence. The title has since been changed to The Hobbit: Battle of the Five Armies , which sounds way more Hobbit-y. Peter Jackson announced this news on his Facebook page:

Our journey to make The Hobbit Trilogy has been in some ways like Bilbo's own, with hidden paths revealing their secrets to us as we've gone along. “There and Back Again” felt like the right name for the second of a two film telling of the quest to reclaim Erebor, when Bilbo’s arrival there, and departure, were both contained within the second film. But with three movies, it suddenly felt misplaced—after all, Bilbo has already arrived “there” in the "Desolation of Smaug".

When we did the premiere trip late last year, I had a quiet conversation with the studio about the idea of revisiting the title. We decided to keep an open mind until a cut of the film was ready to look at. We reached that point last week, and after viewing the movie, we all agreed there is now one title that feels completely appropriate.

And so: "The Hobbit: The Battle of the Five Armies" it is.

Oookay. Well. We have some other title suggestions for this movie, which hits theaters on December 17, 2014:

The Hobbit: There And Back Again (Orlando Bloom's Career)

The Hobbit: Come For The Special Effects, Stay For The AC... Oh Wait. It's December.

The Hobbit: Read The Book

The Hobbit: Stretching Things Quite Thin

The Hobbit: These Are Actually Just Deleted Scenes

The Hobbit: Doin' It For The Box Set

After all, Jackson did say that we shouldn't be surprised if we see the title There And Back Again surface on the collector's edition. His words:

As Professor Tolkien intended, “There and Back Again” encompasses Bilbo’s entire adventure, so don’t be surprised if you see it used on a future box-set of all three movies.

So there you have it: The trilogy that could have arguably been a single movie has a new title for its third movie. Jackson has yet to say how long the feature will be... but let's predict that it will be long. Maybe another title option ought to be The Hobbit: Wait For The DVD So You Don't Have To Take Ten Bathroom Trips During The Movie.