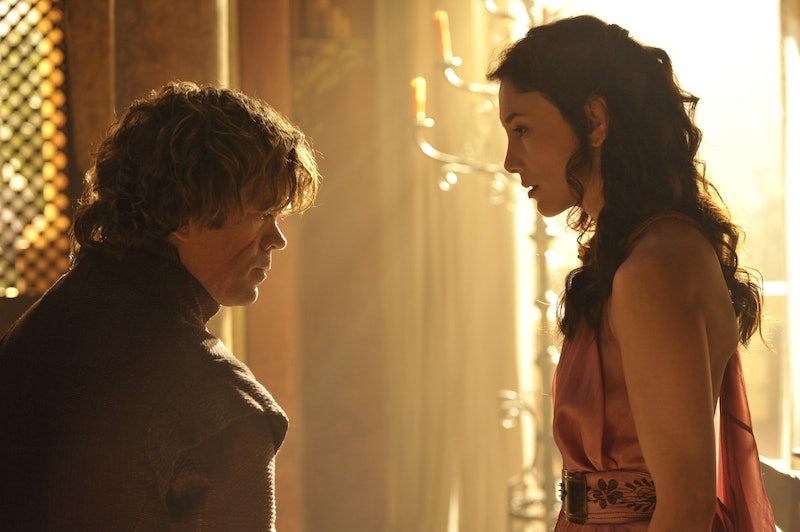 There is so much going on in Game of Thrones right now that it's almost impossible to remember all of the moments. But whether you're familiar with the George R.R. Martin books or not, you should never ignore anyone. Take for example Tyrion's ex-lover Shae on Game of Thrones. Tyrion essentially banished Shae via ship from King's Landing. In her eyes, what he did was an insult to the relationship they had together while he was only trying to ensure her safety from his sister Cersei and his father Tywin.

Now as good as Tyrion's intentions were, they're not going to quell the anger and betrayal she must be feeling. If you were expecting Shae to just disappear into the sunset with her life intact, you are extremely optimistic (and probably unfamiliar with Game of Thrones). Sure, we've all been busy still recovering from the epic death of Joffrey and the subsequent arrest of Tyrion and that awful rape scene between Jaime and Cersei. But if the show follows the trajectory of the books, Shae was involved in causing pain to some of our favorite and least favorite characters. We saw how it went down on the small screen, but it gets really gruesome in the books.

And now comes the phrase we all either love or love to hate: spoiler alert. Turn away now if you don't want to know anything from the book series ruined. Read the newspaper. Go take a walk. Do anything else except read this story.

In the books, Shae returns to King's Landing during Tyrion's trial for a grim reason: She betrays her ex-lover by saying he did in fact conspire to kill King Joffrey and plan the murder with his wife Sansa. (If you recall, Sansa was rushed out of the city and onto a boat with the ultimate sketchy character on Game Of Thrones, Petyr "Littlefinger" Baelish.) Shae explains, in excruciating detail, the nature of her relationship with Tyrion, and with this damning evidence Tyrion knows he will be proven guilty of the murder he did not commit.

When Tyrion finally sees Shae again — how he is able to do this is a story better left to be read or watched — he doesn't offer forgiveness. He instead finds her in the bed of his father, and after feeling the ultimate sting of betrayal, he strangles her with his bare hands.

So things don't end too well for the young prostitute turned girlfriend of Tyrion. Why she chooses to tell a fake story about Tyrion's supposed murder conspiracy may change from book to series — in the book she makes an agreement with Cersei that in exchange for her fake testimony, she will get to marry a knight and receive a comfy new pad in King's Landing. But considering how mad the TV version of Shae was after Tyrion broke up with her, it seems revenge is at least partly on her mind.

Moral of this story? No one is ever safe in Westeros. Count your blessings you don't live there.