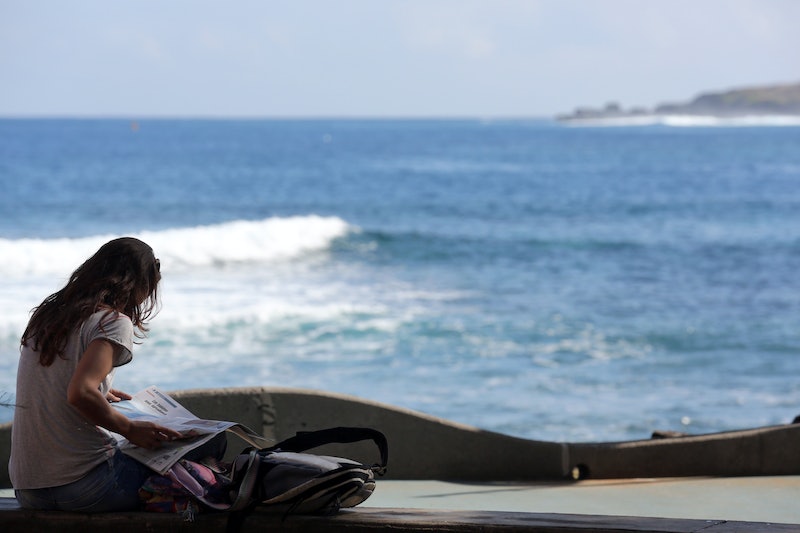 Novels let you settle in. They give you time to hang up your clothes, do a little sight-seeing, enjoy a few home-cooked dinners. They take you out for scrambled eggs and pancakes in the morning and wave you goodbye from the platform. Short stories, though, can be inhospitable. With their clipped length, they kick you out just when you’re getting used to your cousin’s lumpy futon.

But (to belabor this metaphor), sometimes short trips are the best ones — the most memorable. Short stories are like a day trip to Paris. Exhausting, sure. But you still get to see the Eiffel Tower and eat a croissant. (Metaphor... finally... over.) If you don’t read short stories, you could be missing out; some of our greatest writers do their best work with the short story form. Alice Munro, Ann Beattie, and Lorrie Moore all fall into this category. And some short stories made big splashes when they first came out in Vogue or The New Yorker, shocking readers or drawing their attention to an important issue. Years later, they’re still talked about in English classes and book clubs.

The 17 stories below are short, significant works by some of our most influential writers. Many of them are available online, and, if you see them linked, you can read them for free, right now. Not a bad deal.

In this feminist classic, Jane’s doctor husband locks her in an upstairs room so she can tackle her tendency towards depression and hysteria. Because that sounds like a really good idea.

Originally published in Vogue, the story chronicles the conflicted thoughts and feelings of Louise Mallard upon hearing of the death of her husband.

A story of racial tensions and domestic violence, “Like a Winding Sheet” was included in The Best American Short Stories of 1946. Petry became the first African American woman to sell more than a million copies of a book with her novel The Street.

This true American classic incensed readers when it was first published in The New Yorker. The story was meant to be shocking, Jackson later said, forcing readers to see “the pointless violence and general inhumanity in their own lives.”

In this widely anthologized short story, Flannery O’Connor proves herself as a Southern Gothic master.

A mother looks back at her troubled relationship with her eldest daughter in this quiet and devastating story.

“Where are You Going” is a literary true-crime short story, inspired by real-life events and the Bob Dylan song “It’s All Over Now, Baby Blue.”

“Everyday Use” is one of Walker’s early, well-known stories, published in the collection In Love and Trouble. Nine years later, she would win the Pulitzer Prize and the National Book Award for The Color Purple.

“Shifting” is vintage Beattie, a writer better known for her short stories of discontented east coast types than for her novels. (Though Chilly Scenes of Winter is excellent!) Find “Shifting” in The New Yorker Stories. (Or read "Janus" now to tide you over.)

The rape fantasies of a group of bridge-playing women turn to... self-defense fantasies? in the mind of the story’s protagonist. A quirky feminist classic.

A haunting glimpse of the holocaust, “The Shawl” is one of Ozick’s most well-known works. Her book by the same name combines the seven-page story with a novella, which reintroduces the character Rose 30 years later.

Winner of the Nobel Prize in Literature in 2013, Munro is often hailed as the finest short story writer in the English language. My favorite of hers is “Fits” from The Progress of Love, about a woman who makes a gruesome discovery at her neighbors’ house. For more Munro, read 18 Short Stories From Nobel Prize-Winning Writer Alice Munro Free Online.

“A Romantic Weekend” is a journey into the twisted mind of Mary Gaitskill. It appears in the collection Bad Behavior, which also includes “Secretary,” the story that inspired the movie starring James Spader and Maggie Gyllenhaal.

One of the Best American Short Stories of the Century, “You’re Ugly” showcases Moore’s dark humor and minimalist prose style.

Funny, sad, and heartwarming all at once, “Who’s Irish?” mines the complications of intergenerational families.

Every story in Interpreter of Maladies (one of the Pulitzer Prize-winning books written by women) is a gem. “A Temporary Matter,” about a couple forced to have a difficult discussion during an electrical outage, is my personal favorite.