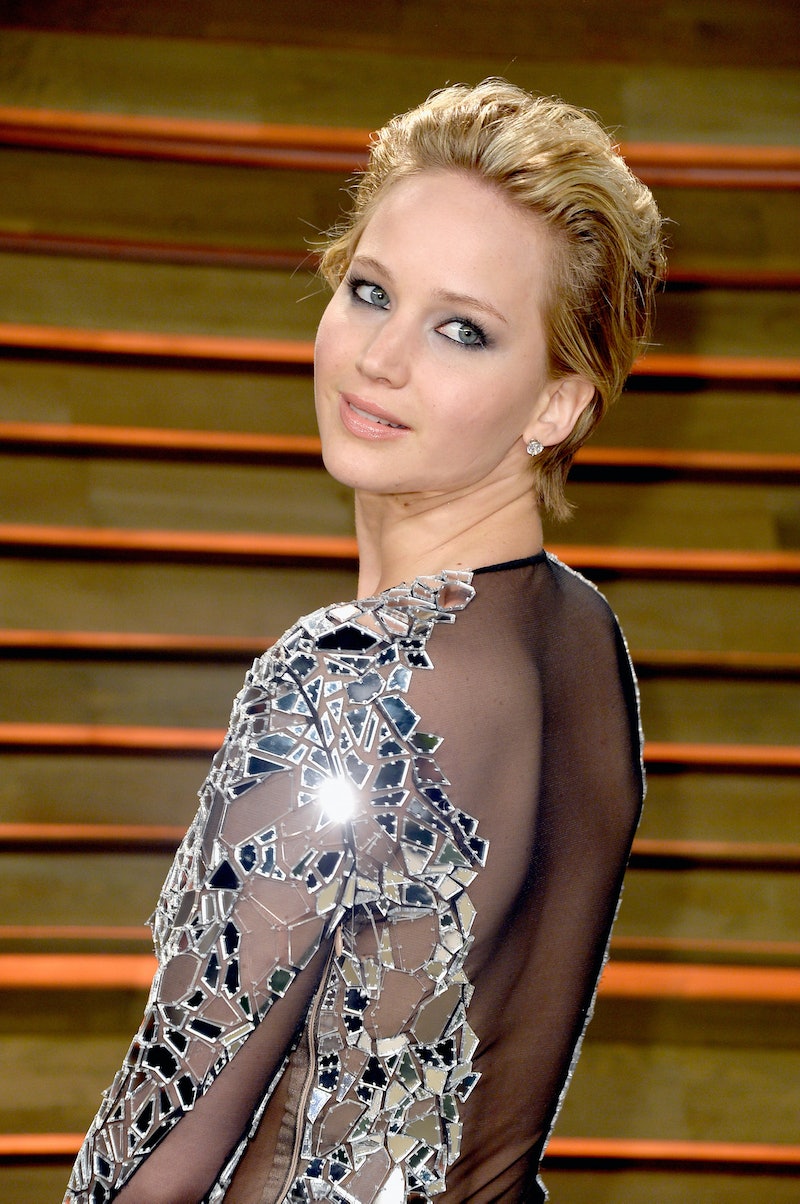 J. Law didn't pull out a weapon to deal with the paparazzi who pursued her after her date with Nicholas Hoult, but Jennifer Lawrence did pull out the next best non-violent option: her middle finger. The star was exiting a bar in Dorchester, London Thursday night when the paparazzi arrived. She and her fellow X-Men star had made it into a pink cab, but Lawrence, in a rare show of anger, treated the paparazzi to a full serving of her middle digit as they drove out of sight. Hoult appeared to be trying to get her to recant, but Lawrence's finger, wrist, and will stood strong.

I have often wondered what it would be like to be famous. Apparently, being a member of the A-list means that you are a rare creature, much like the "snipe" in Up. As such, you will be hounded at every waking moment, and pursued by a rapacious band of shutterflies thirsting for your image. In short, it's no wonder that even Jennifer Lawrence has reached her breaking point.

In honor of her struggles, and the struggles of celebrities the world over, I decided to brainstorm a few more non-violent options designed to thwart the paparazzi. This is just the beginning, a few drops in the bucket, but I have faith that the educated minds of James Franco and Natalie Portman will be able to come up with their own satyagraha. I present to you: the Freymiller Guide to Smearing the Paps, or Ways to Ruin the Picture. But first, here's one of the original freedom fighters in this movement: Jennifer Lawrence.

Jenna Marbles hands out quick rejection with this infamous face. Pulled from her YouTube video "How To Avoid Talking To People You Don't Want To Talk To," this face is guaranteed to shut down any insistent dancer at the club. If every celebrity starting doing this the instant they encountered a paparazzi, it would, at the very least, help fans start to understand their plight. No one wants to read a magazine where every celebrity looks like a walking version of Edvard Munch's "The Scream."

If you spot a paparazzi, simply raise sign that contains an uncomfortable fact about the world, like, "Every year, 7 million children die of starvation." Come to think of it, paparazzi are nature's free advertising. If they chose to do so, each celebrity could flash facts of the day that would raise awareness of various national or global issues. And, with enough exposure to sobering truths, perhaps the paparazzi would start to reconsider their life and career choices.

Pull On Your V for Vendetta Mask

If every celebrity starting going out in a V for Vendetta mask, the paparazzi would at first have a field day, then quickly grow bored. It might take years, but slowly, over time, A-listers could make the world safe for their fellow brethren. Only by making everyone the same can they win back their freedom to bare their faces to the sun. Only when the last paparazzo throws his camera to the ground, groaning in disgust, will it be safe for the honest celebrity to crawl forth, unmasked, and cavort again under the broad blue sky.

These are, of course, measures that put the onus on the celebrities rather than on their virtual stalkers. One of the unfortunate trade-offs for fame these days is that your personal life is considered a matter of the public record. So, short of cutting off the demand as a viewing populace, and freeing stars to be "Just like us!" without the accompanying photo spreads, we can only hope that each paparazzo will start to grow a beating heart. Then again, maybe it's easier and better for celebrities to fight back through these non-violent means, or, at the end of the day, to release their birds and let them fly with freedom of expression.