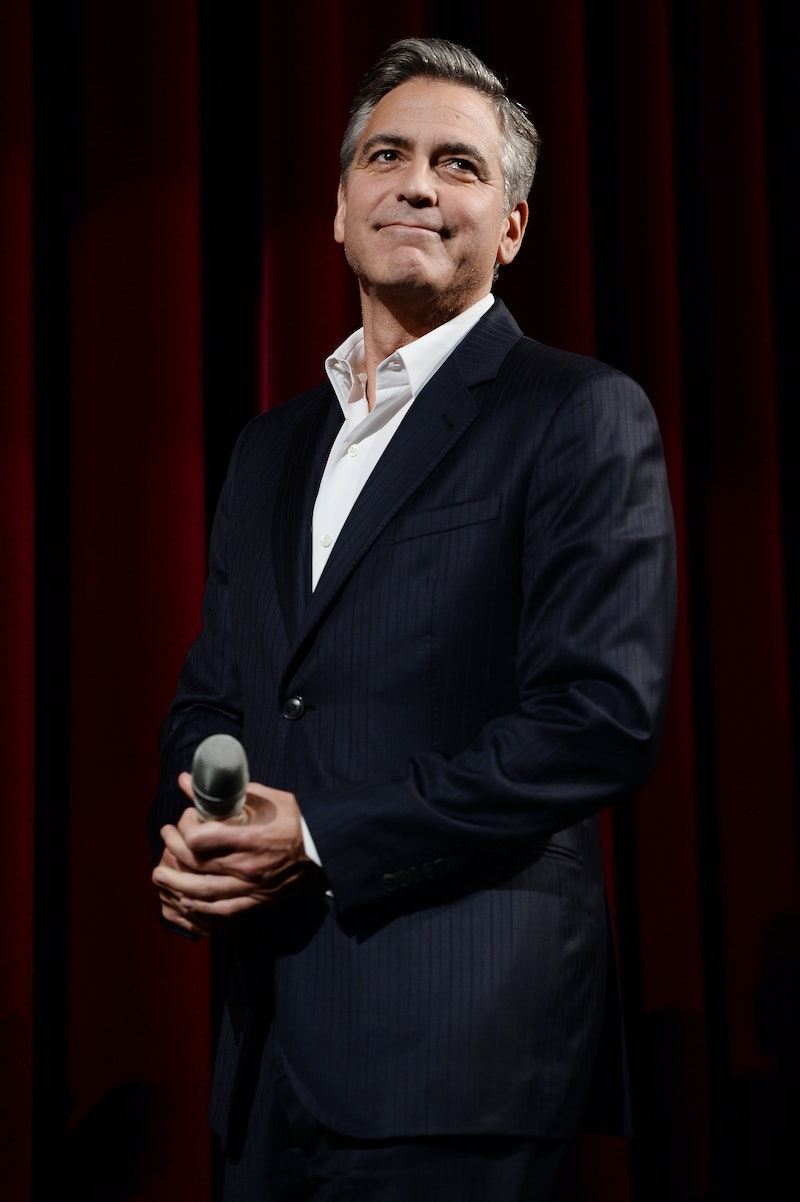 According to sources who spoke with People magazine, George Clooney is engaged to Amal Alamuddin. The 52-year-old bachelor reportedly proposed to the 36-year-old British lawyer "not that long ago." Entertainment Tonight says that multiple sources have confirmed that the two are indeed looking to marry, as Alamuddin was allegedly seen showing off her engagement ring to Cindy Crawford while dining at Nobu in Malibu on Thursday.

George and Amal are trying to keep things very low-key but they also aren't really trying to hide this, it doesn't seem. I think it's like they want the people they love to know that this is real, that they plan on being together forever.

Us Weekly hypothesizes that Clooney popped the question when the pair were vacationing in Cabo San Lucas. According to their sources (seriously, who are all these loud-mouth friends they have? Not that I'm complaining), Clooney and Alamuddin were "toasting the engagement" recently at Craig's restaurant in West Hollywood. The talkative source continued:

This is the healthiest relationship I've ever seen George in. He seems incredibly happy, and Amal is such a sweet and intelligent girl, who has her own thoughts and ideas and doesn't just bow down to everything he says.

The New York Daily News reports that the two were first spotted out in London in October and have been "inseparable ever since," and People reports that Alamuddin's ring is "huge." The couple's relationship has been serious for quite some time — the two traveled to Tanzania and the Seychelles together this winter, and in February, Alamuddin attended the White House screening of Monuments Men with Clooney. In late March, they were photographed in London having dinner with friends John Krasinski and Emily Blunt.

If dining with Krasinski and Blunt doesn't make the relationship "official," I don't know what does.

As we all know, Clooney's one of the most eligible bachelors in Hollywood (whatever that means) and has dated Stacy Keibler, Elisabetta Canalis, Sarah Larson, Krista Allen, and Renee Zellweger. He's notorious for having never "settled down" (again, whatever that means), but it seems he's found someone he'd like to spend the rest of his life with, and hey, that's always pretty damn cool and special.

As for whether or not this is all true, Clooney's rep has said he doesn't comment on the star's personal life. Update: Alamuddin's law firm has "confirmed" the engagement with a congratulatory statement:

The barristers and staff of Doughty Street Chambers offer their best wishes and congratulations to Ms. Amal Alamuddin, a member of Chambers, and Mr. George Clooney on their engagement to be married.