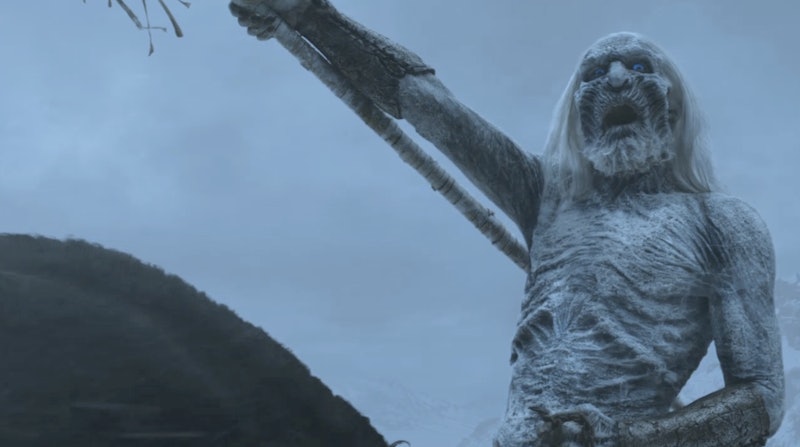 It's been a while since we've seen a proper white walkers scene on Game of Thrones. Finally, Sunday's "Oathkeeper" answered the call in a jam-packed episode. As if seeing a colony of sex slaves at Craster's Keep wasn't enough, the product of those unwilling unions are hundreds of unwanted babies (remember Gilly got her baby boy Sam Jr.?) and rather than kill the babies outright, the mothers have been "sacrificing" the babies by leaving them for the white walkers. The Betrayers (who overtook the Keep) continue the tradition and leave a baby for dead in the frozen woods. A white walker comes along and picks up the child and the big question is: what have the white walkers been doing with those babies?

Well, we saw pretty clearly in the last few minutes of "Oathkeeper" that the walkers take the babies, place them on an altar of sorts, and then touch them until their eyes turn a crystal blue. So what is the meaning of all this? Well, according to the books, this is how "the others" procreate.

Since they cannot make children of their own — being frozen zombies kind of makes that difficult — the walkers turn abandoned children into children of their own. In the books, the women of Craster's Keep seem to assume this is their fate, but as we saw in the Sunday's episode's final moments, those assumptions were right on.

Hey, being the child of white walker seems like a better life than the life of pretty much anyone at Craster's Keep, so maybe that ominous ending ain't so bad after all?