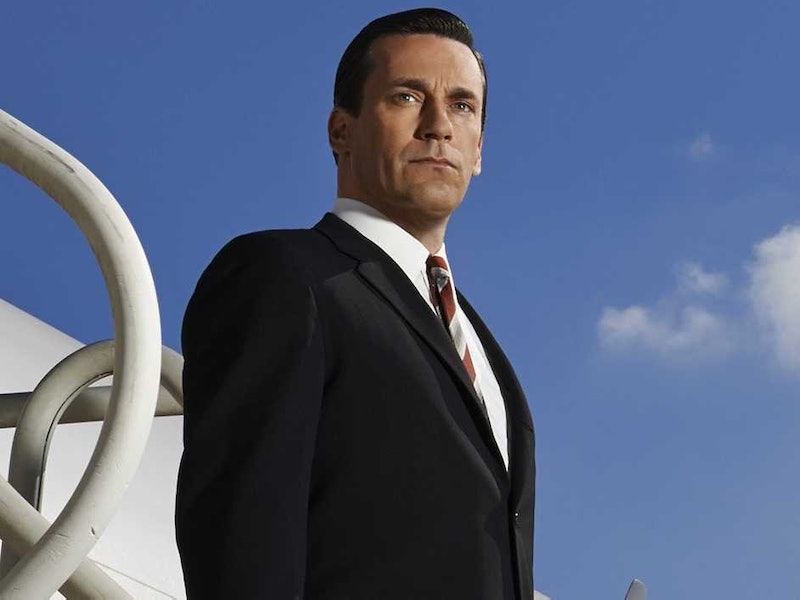 Usually, at the end of each week's Mad Men episode, we're left focusing on that week's pop culture insert: the song that plays over the credits. Generally, it puts a perfect cap on the events of the episode both in mood and content. This week, however, it was the episode's first moments that stole the scene (yes, even over Jimmy Hendrix's "If 6 Was 9"). What movie was Don watching at the beginning of Mad Men ? And, more importantly, what did it mean?

Don was watching a 1969 film called Model Shop by french filmmaker Jacques Demy. So sure, there are handsome men driving around in picturesque shots of fine cars: what else does that have to do with Don? It's simpler than you might think. Model Shop follows George Matthews, a 26-year-old, floundering young man who's in the midst of an affair with an older woman in Los Angeles. He's waiting to be drafted, and as such can't make decisions about anything else in his life. This may or may not bleed over to his relationship with his girlfriend. As the story unfolds, George comes across a beautiful Frenchwoman who works in a "model shop" (oh look, it's the title of the movie) that's actually a business that takes naughty photos and eventually, George finds the will to carry on after he and this woman get together.

Funny how that sounds nothing like Don's current situation. Oh wait, it's exactly Don's current situation, minus the beautiful French woman. Like George, Don is a floundering man, paralyzed while waiting to hear back about his fate at SC&P. Without a job, he's motionless, visiting Megan only out of obligation (this time, her manager called him and was concerned). He also doesn't take that time to do what he promised Megan he'd do and move out to California — as she points out, he could have very easily spent his interim time away from SC&P by living with her in California. Instead, he (much like George) is paralyzed and unable to make a single decision about his life, even the one he already made in a promise to his wife the year before.

Model Shop also has a breakup scene that's eerily similar to Don and Megan's — right down to the furniture:

The problem is that Don isn't 26 years old: he's a grown ass man. The comparison of the two wildly similar storylines certainly shows what a manchild Don still is, even after the events of Season 6 promised to bring him into a more mature era. While he finally seems to grow up by episode's end — when he takes SC&P's terrible job deal (designed specifically to wound his ego and get him to quit the firm altogether) without complaint or pride — that's only the beginning. Don may have been a hot shot, but up until this season, he's been a boy. Luckily, he's finally made it all the way to mental age 26. Now here's hoping the 459th time (we've seen Don's new leaf act before) is the charm for Don and this transformation actually sticks.