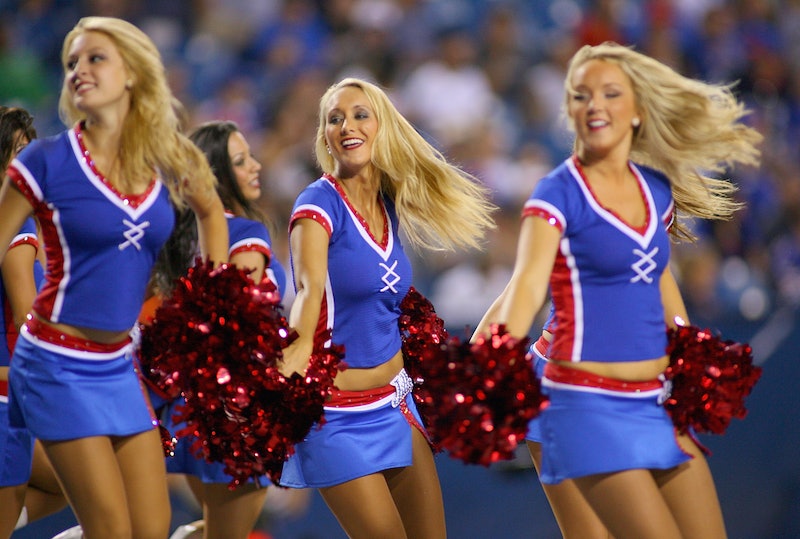 Cheerleaders are a staple at nearly every football game, from high school all the way to the NFL. Many women who cheer on the sidelines of professional football games treat it as a profession, putting in hours of rigorous training, as well as commuting to off-site media and charity events. So, why are cheerleaders constantly denied living wages? Five former members of the Buffalo Jills — the cheering squad for the Buffalo Bills — recently filed a lawsuit against Buffalo Bills Inc and the Stejon Productions Corporation, alleging that the organizations violated minimum wage laws, and held unlawful deductions from payments and uncompensated mandated travel.

The lawsuit also acknowledges that the franchise has "a very strong role in and controlling the Jills' activities," which resulted in demeaning rules and behavior, such as "jiggle tests" to check for body fat. (Seriously?) The cheerleading squad has suspended all activities until further notice.

Yes, cheerleading seems like a glamorous profession — after all, NFL cheerleaders are constantly in the public eye and receive tons of media attention. But judging from the Jills lawsuit, there's also a hefty price to pay. The cheerleaders have to shell out money for try-out fees, uniforms (about $650), cosmetics and travel expenses.

Although one Buffalo Jills member was paid $1,800 for a season, that's the highest amount for any of the plaintiffs. The others made anywhere between $105 to $806 for one season.

What does a season entail? For starters, eight home football games, each requiring eight hours of the members' time. The Buffalo Jills have mandatory practice twice a week, totaling eight hours, as well as photo sessions and fittings.

They're also required to make at least 20 appearances at corporate, charity or community events throughout the year. While some of the events were deemed "paid appearances," the lawsuit claims most Jills were never compensated even though the franchise collected millions of dollars for these events.

In addition to the lack of pay, many of these outside appearances were sexually degrading. For instance, "The Man Show" required the cheerleaders to walk around in skimpy bathing suits and "endure lecherous stares and demeaning comments of a sexual nature," the lawsuit says. Not to mention the Jills handbook, which includes some infantilizing guidelines on how to wear a tampon and "other lady body maintenance."

The Buffalo Jills aren't the only professional cheerleading squad fighting back against low pay and demeaning employment policies. In fact, they are the third professional squad to take legal action in 2014 alone. The Oakland Raiderettes kicked things off earlier this year with a class-action lawsuit against the Oakland Raiders franchise.

Unsurprisingly, the official Raiderettes handbook, which first leaked to The Los Angeles Times, is not all that different from the Jills. It provides guidelines on "dining etiquette," including how to properly fold a napkin, and has a lengthy section on how not to get date-raped:

One such example concerns a player who gave Halloween parties every year and many of the Raiderettes attended. This same player was suspended from the team for drug use but also arrested for date rape. For you on the squad who have attended those parties, just think how narrowly you missed having your photo in all the local papers and/or being assaulted.

Barely a month later, a cheerleader from the Cincinnati Bengals squad, the Ben-Gals, filed a lawsuit claiming that she was paid less than $2.85 an hour. After working more than 300 hours and attending 10 home games, the cheerleader made just $855 for the season.

As Amanda Hess writes in Slate, cheerleading started out as a volunteer position, and most NFL squads were composed of members from local high school and college cheer programs. It wasn't until the Dallas Cowboys instated a professional all-female cheer squad, the Dallas Cowboys Cheerleaders, in the 1970s that cheerleading became a paid position. Many other NFL teams followed suit, and now all but six NFL teams have cheerleaders gracing their sidelines each season.

If this was 40 years ago, where NFL cheerleaders were high schoolers looking for extra cheer practice, then maybe these labor policies would fly. But it seems only fair that professional cheerleaders receive living wages for their work and time commitment.

More like this
24 History-Making Black Women You Probably Didn't Learn About In School
By Ayana Lage and JR Thorpe
25 Inspiring Quotes From Black Women To Celebrate Black History Month
By Kyli Rodriguez-Cayro and JR Thorpe
Twitter Is Identifying With Sally Field & Jane Fonda’s Friendship In New Viral Video
By Jake Viswanath
What Is Naomi Osaka's Net Worth? The Mother-To-Be Earned Her Tennis Hiatus
By Hugh McIntyre
Get Even More From Bustle — Sign Up For The Newsletter
From hair trends to relationship advice, our daily newsletter has everything you need to sound like a person who’s on TikTok, even if you aren’t.