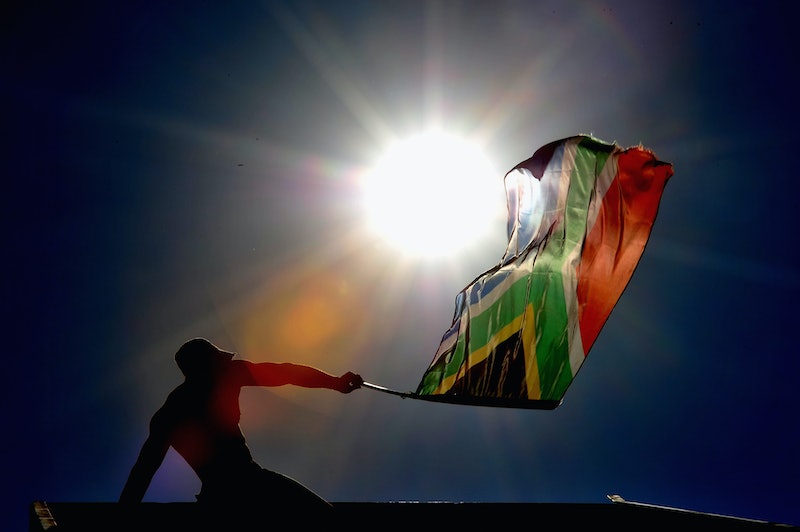 February 14 last year saw the high-profile death of Reeva Steenkamp, a South African model and reality TV star. Much of the ensuing media attention stemmed from her famous killer, Oscar Pistorius, who had become the first double amputee to compete in the Olympics in 2012. With the world glued to Pistorius' murder trial, there's a far more important conversation being swept under the carpet: How common violence against women really is in South Africa.

Last Valentine's Day, three women were murdered in South Africa, including Steenkamp. In fact, a woman is killed every eight hours by an intimate acquaintance, an official estimate that is likely far below the actual rate. Earlier in April last year, a 17-year-old girl, Anene Booysen was brutally gang-raped, and her injuries were so horrific that the hospital staff who treated her were given counseling. Booysen didn't survive the ordeal, but was able to identify her ex-boyfriend as one of the men who had participated in the crime.

Following Booysen's death, South Africans rallied to create a "Black Friday" campaign, which was meant to draw attention to the prevalence of rape in the country. Between 2010 and 2011, South Africa recorded 56,272 rapes. This amounts to 154 rapes a day — double the number of those of India — and gives credence to the theory that rape has, to a large extent, been normalized in South Africa.

In 2009, the country's Medical Research Council conducted a survey that found that more than one in four men admitted to raping a woman. Nearly half of these men also admitted to attacking multiple women. Moreover, 5 percent of men said that they raped a woman within the last year, and an astounding 75 percent said that they first committed rape while they were still in their teens.

These statistics lend credence to consistent claims that South Africa has one of highest, if not the highest, rates of violence against women in the world. In the United States, it's estimated that 60 percent of rapes go unreported. This number is likely very similar in South Africa, especially considering the country's deeply rooted patriarchal standards. South Africa's Minister of Basic Education, Angie Motshekga, said during a business briefing, “There is an entitlement that men have… It starts much earlier, when boys are born, they are celebrated, and the power and sense of entitlement starts there.”

Sky News conducted a small, candid survey of 38 men in a township near Johannesburg, to examine their attitudes towards women. Their results were shocking: Of the 38 men surveyed, 28 said they had raped a woman, and were willing to talk about how and why. The men seemed to relay a certain kind of entitlement to a woman's body. It is because of these types of attitudes that Motshekga wishes to further strengthen their gender-violence curricula in schools across the country. Said Motshekga,

It is just about men’s attitude and the way we socialize them in this country, and the structure of patriarchy which gives men the sense that they have the right to harm, to an extent of killing, women. That is the key issue.

The day she died, Steenkamp had planned to wear black in honor of Black Friday and Booysen's untimely death. Tragically, she wasn't able to participate. But her death should not be an excuse to sensationalize one murder trial. Rather, it should be catalyze a deeper dialogue about the state of women in South Africa, and its desperate need to improve.