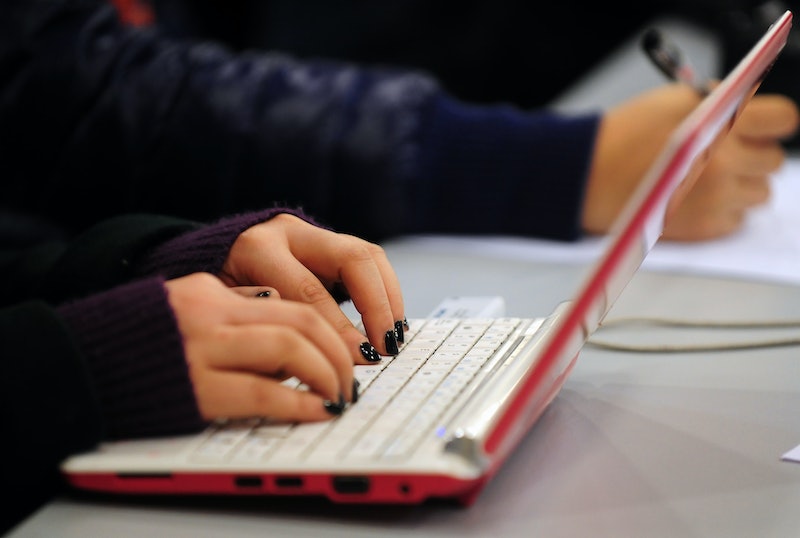 Fact of the day: the QWERTY keyboard is bad. It does not provide the best way to type. We've known this for a while, and yet we're still using it; the QWERTY keyboard, developed in 1868, has somehow managed to withstand the test of time for nearly 150 years. While humans love innovation in every other aspect of technology, from our cell phones to our watches and even our glasses, the QWERTY keyboard has preserved its monopoly over typists everywhere because, well, old habits die hard.

Christopher Latham Sholes, the inventor of the typewriter, used a keyboard layout on his original machine that was very similar to the modern QWERTY keyboard. In 1873, Sholes sold the rights of his design to the Remington Typewriter Company, where the keyboard was slightly modified to the model we use today. The origins of the QWERTY setup have been hotly contested, with many claiming that Sholes designed the keyboard to slow the user down in order to prevent the keys on the typewriter from jamming.

However, Japanese researchers have debunked this myth, suggesting that Sholes never intended to perpetuate a purposefully flawed design. Instead, researchers say that the QWERTY keyboard arose from telegraph operators who used morse code. According to Koichi and Motoko Yasuoka, the original layout of the typewriter keyboard —one that was purely alphabetical — was decidedly difficult for telegraph operators, who served as the 19th century beta testers of the first typewriters. After studying their patterns and their needs, it was determined that the QWERTY keyboard was one of the easiest and most useful design for its users.

While QWERTY may have worked well for telegraph operators, technological advances have rendered the profession obsolete. However, QWERTY has not been so fast to go. This is largely due to the ubiquitous nature of the design — few computers in English speaking languages use anything but the QWERTY layout, and it remains the format taught to children who are first learning to type. But despite its widespread usage, not even its inventor was convinced of its effectiveness.

Sholes continued to develop new designs for the keyboard until his death in 1890. In fact, he filed petitions for several different layouts that he thought would be more effective than his original. His final design was released posthumously. But while the original innovator is no longer with us, there has been no shortage of other creators who have sought to improve upon his design.

The Dvorak Simplified Keyboard, developed by Anton Dvorak in 1936, serves as the major alternative to QWERTY. One of the biggest drawbacks of the QWERTY keyboard is the infrequency with which the letters on home row — the row beginning with A and ending with L — are actually utilized. Given that this is where your fingers naturally rest, it seems silly that they would have to move so often from them in order to type the majority of words. According to Dvorak, less than 20 percent of typing takes place on home row.

Moreover, QWERTY suffers from a disproportionate dependence on the left hand for much typing. Not only does the left hand do the majority of the heavy lifting, there also seems to be an imbalance amongst individual fingers, with some digits being over-utilized while others are under-utilized. Dvoark's layout sought to address these problems, and also intended to encourage typing to start from the outer fingers and work towards the inner fingers (which is how you would naturally drum your fingers).

Dvorak's keyboard is used by some, and has been reported to increase typing speed and accuracy as well as decrease long-term typing related strain. However, because the Dvorak keyboard still relies upon the same basic structure as the QWERTY keyboard, its adoption rate has been stunted, and most people are entirely unaware of its existence.

However, there's hope in sight for those of us who are tired of our QWERTY keyboards and their shortcomings. The KALQ system avoids the problem suffered by Dvorak and other similar keyboards that still look like QWERTY. And if it looks like QWERTY, it won't beat QWERTY, seeing as it was adopted by Teletype, a company that produces typewriters and computer terminals around the world in 1910. But KALQ is meant for the modern typist — the one that is all thumbs. Literally.

With the invention of touch screens, iPads, and iPhones that rely on thumbs to do the typing, KALQ has emerged with these trends in mind. KALQ is meant to maximize an alternating rhythm between two thumbs, and has actually already met with considerable success with its testers. Though it was initially developed in 2013, it is still in its beta testing stages, and it is unclear whether or not KALQ will take over the world, sending typing teachers everywhere into a frenzy (and showing them that you can just type with two fingers). But until then, it seems that QWERTY is, for better or worse, here to stay.