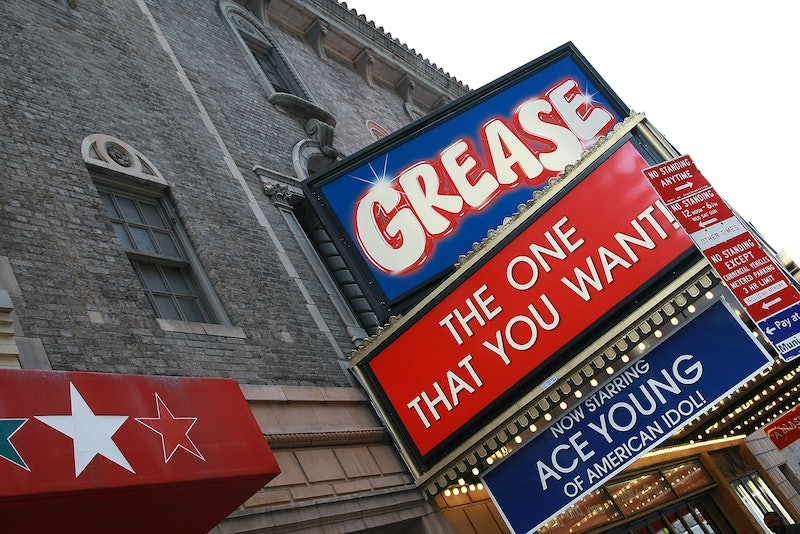 Tell me more, tell me more! There are times when Hollywood's tendency to follow the leader can be incredibly grating. The fact that superhero movies are seemingly endless at the box office hasn't stopped me from shelling out the money to see each one, but it does get a little exhausting. When NBC debuted their live action musical event of A Sound of Music Live in 2013, it drew in approximately 22 million people despite starring Carrie Underwood. That's pretty much all other networks needed to know about the success they could have with something like that. The first network to dip their toe in the copycat pool is Fox with their Grease live broadcast slated to premiere in 2015.

Mind you, I am not complaining. Grease was making musical movies cool long before High School Musical ever came out and a single scene from that movie is ten times cooler than any Glee episode. (A single scene from that movie is even ten times cooler than "Glease", the Glee episode devoted to Grease.) Considering that Grease is Broadway's 15th longest running show and the movie was the highest-grossing number one musical to date, Fox couldn't have chosen a better production to blow A Sound of Music Live out of the water.

The live musical special is going to be three hours long and based on the 1971 Broadway musical, featuring a young ensemble cast. Since the special is based on the musical instead of the more well-known movie, there are a few things that might confuse people who have only ever seen the film.

The character names are a little different.

In the musical version of Grease, Sandy's last name is Dumbrowski instead of Olssen and Eugene's last name is Florczyk instead of Felsnick. Sandy was still the new girl at Rydell High, but she didn't originally come from Australia until Olivia Newton-John — who is also Australian — played her in the movie. In addition, Danny's gang, the T-Birds, were originally called the Burger Palace Boys.

There are more songs (obviously).

It should come as no surprise that the musical version of Grease would have more songs in it than the film version of Grease. After all, the film only needed the songs as they worked to advance the plot whereas the songs are half of a musical's the plot. "Alma Mater" is the opening song of the show and acts as the Rydell High school anthem. There's also "Those Magic Changes", "Freddy, My Love" and "It's Raining on Prom Night" to name a few others that didn't make the film's cut.

Sandy never went to the dance.

Who could forget the dance scene? It taught us that we were born to hand-jive, baby. However, in the musical, instead of Danny and Sandy heading there together and getting separated during the dance contest which Danny would go on to win with Cha-Cha, Sandy doesn't go to the dance with Danny at all. She stays home singing "It's Raining on Prom Night" while Danny instead enters the dance contest with Rizzo.

The supporting characters get more development.

While the film focused on the relationships developing between Danny and Sandy and Kenicke and Rizzo, the musical devoted more time to developing each member of the ensemble cast as much as possible. The Pink Ladies and the Burger Palace Boys had four people each aside from Danny and Sandy and the two act format of the musical allowed for more spotlight to shine on them that we missed out on in the movie.

This is a no-brainer considering how hard it would be to race cars across a theater stage, but the car race scene from the film is not in the musical at all. Instead, Sandy has her big revelation at a party in one of the Pink Ladies' basements after having a conversation with Rizzo and listening to her sing "There Are Worst Things I Could Do". Is it less exciting than a massive car race? Maybe. Is it more emotionally poignant? Definitely.

It's a lot for a movie fan to get used to, but I doubt it'll stop anyone from tuning in to see the musical. In fact, it seems like even more reason to watch the live broadcast. If you don't and want to still call yourself a Grease fan, then Sandy Olsen has some words for you.